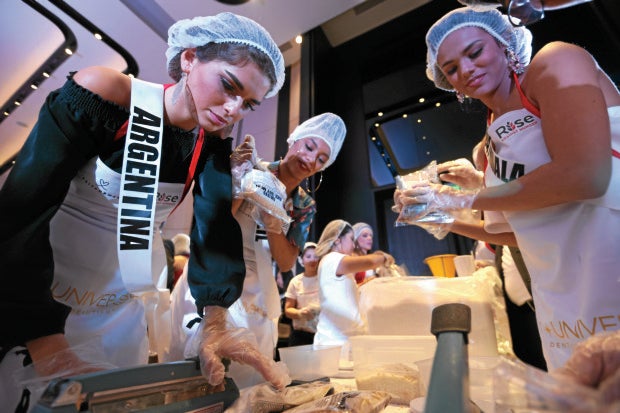 Staying true to the words popularized by reigning Miss Universe Pia Alonzo Wurtzbach “confidently beautiful with a heart,” the pageant’s aspirants lent their time to a philanthropic cause and volunteered for a program to help mitigate hunger.

“I am overwhelmed. It feels good to be able to help my fellowmen, to know that I am able to give back to my country,” Miss Universe Philippines Maxine Medina told the Inquirer.

For Deshauna Barber of the United States, participating in the activity was an “amazing” opportunity.

“I think it is important to work with an international organization to make sure that you focus on international causes. And world hunger is one of those on top of the list,” Barber said.

The nonprofit organization is the Philippine arm of Rise Against Hunger in the United States, which has been a partner of the Miss Universe Organization (MUO) for several years now.

The MUO has provided volunteer work through its contestants in the Miss Universe, Miss USA and Miss Teen USA pageants, said Jomar Fleras, executive director of Rise Against Hunger Philippines.

Wednesday’s activity was in partnership with the Department of Health (DOH), which has a project geared toward the first 1,000 days of a child starting from conception until after birth.

“The DOH program does not involve food and we want to make this a complete program by including food in it,” Fleras told the Inquirer.

He said it was the first feeding study in the world providing supplemental feeding for the first 1,000 days of a child.

It was also the first time that the MUO’s partnership with Rise Against Hunger directly affected the host country of the Miss Universe pageant.

“The pageant has been held in the US and the food packs assembled there were distributed in other countries,” he said.

Each 400-gram package contains rice, vegetable protein, dehydrated vegetables, flavoring sachet and vitamin powder. One pack is equivalent to a meal for an entire family.

Health Secretary Paulyn Ubial said the partnership program would  help curb the incidence of underweight newborn babies and ensure that the children receive sufficient nutrition during the early stage of life.

The candidates, who were assigned to different packing stations, accomplished the target of filling 10 boxes before the 4 p.m. deadline.

Each box contained 360 food packs or a total of 3,600 packages that will be distributed by the DOH to mothers in the indigenous communities of Pampanga province.