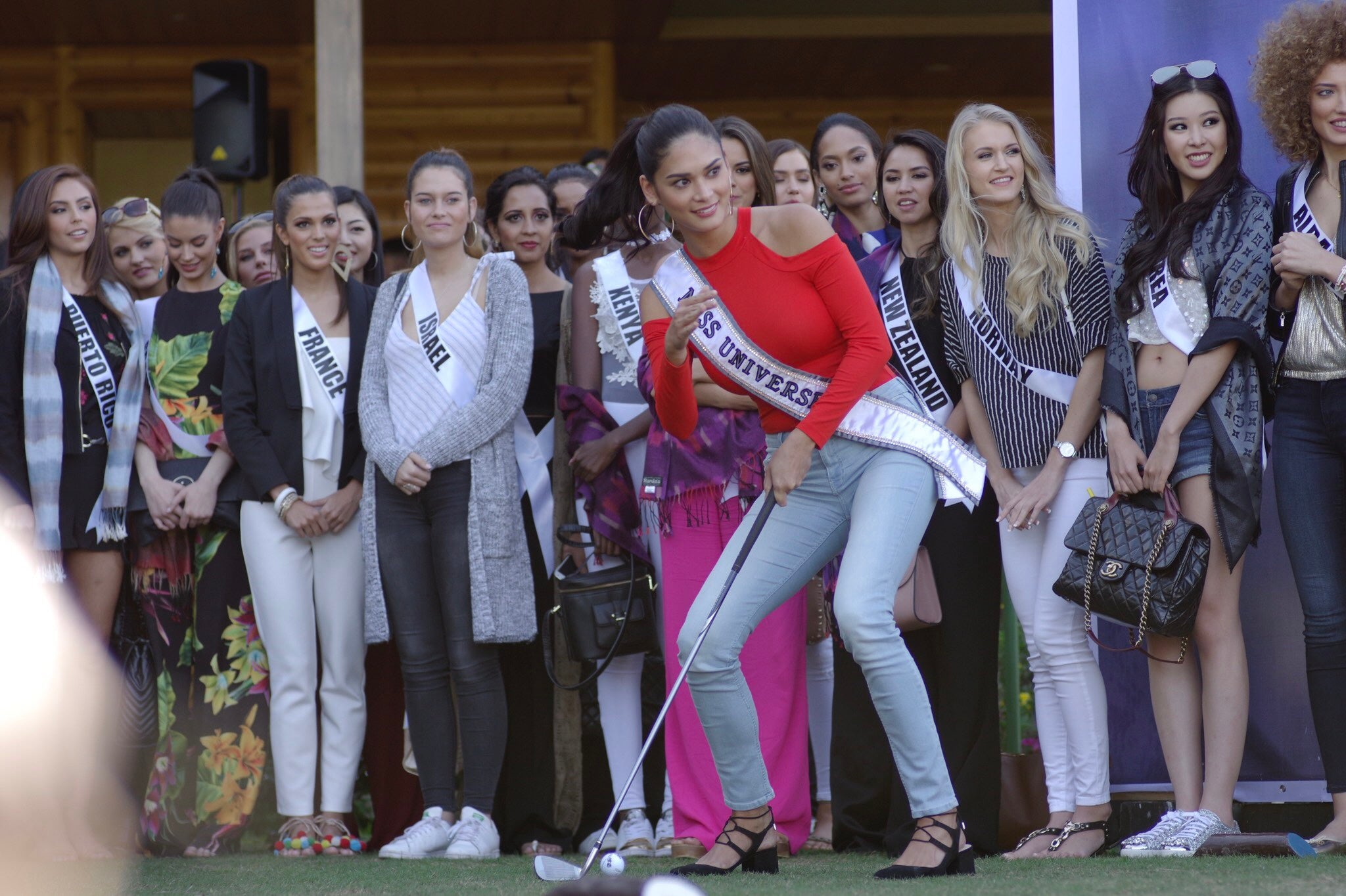 GOLFING PIA. Reigning Miss Universe Pia Alonzo Wurtzbach led a ceremonial tee off at Baguio Country Club for a golf tournament organized for the visit of Miss Universe candidates on Wednesday (Jan. 18). Wurtzbach had to be coached by Baguio Mayor Mauricio Domogan, an avid golfer. Photo by Richard Balonglong

That might well describe reigning Miss Universe Pia Alonzo Wurtzbach who managed to joke about feeling under the weather on Wednesday when she almost missed the gala dinner for 28 pageant candidates who visited this city.

“I think my body does not want to give up the crown yet,” said Wurtzbach, referring to a precondition among Miss Universe winners asking them to yield the crown to their runner-up should they be unable to discharge their duties for whatever reason.

“That works better than the medicine [I took], so I got up right away,” she told a cheering crowd. “Over my dead body,” she added.

The series of charity events in Cebu and Manila had apparently exhausted Wurtzbach who apologized for being two hours late for the dinner show at the Baguio Country Club (BCC).

“I would like to apologize for keeping you waiting. I was not feeling very well earlier. But here I am. ‘Laban!’ (Fight!),” she told the crowd.

The Miss Universe contestants had been hopping from Davao to Vigan and Baguio since they arrived last week.

In Baguio, the beauty queens took part in a float parade, graced an invitational golf tournament and an art exhibit, planted pine tree seedlings named after them, and picked strawberries at the BCC garden.

“Pia Rosebach,” he introduced the reigning Miss Universe, drawing laughter from the crowd. He tried again and said, “Versebach,” prompting the emcee and the crowd to correct him.

Their schedule here included a short arts and history lecture by filmmaker Kidlat Tahimik and an exhibit of paintings by the Tam-Awan Village artists. They also watched a traditional weaving demo and joined cultural dancers who performed a Cordilleran “tayaw.”

But the candidates were enjoying themselves, Wurtzbach said. “Some of the girls approached me to say that they had such a warm welcome. Since the moment they landed, people here [were] very accommodating… People [have been] very welcoming, not just here in Baguio, but throughout their stay in the Philippines. Good job, guys,” she said.

Miss Denmark Christina Mikkelsen agreed. “It’s a nice feeling. So many people took good care of us,” she said.

Miss Kenya Mary Esther Were and Miss Malta Martha Fenech said they enjoyed the solar paintings of Baguio-based artist Jordan Mang-osan who completed a portrait of Wurtzbach by burning the image on wooden board using a special magnifying glass.

“I’ve never seen anything like it. Using the sunlight to draw is creative artistry,” said Were.

Meanwhile on Thursday, the Philippine Navy (PN) personnel treated the beauty queens to military honors and a ride to Pico de Loro in Nasugbu, Batangas, onboard the motor yacht, MY Happy Life.

The Naval Special Operations Group (Navsog), the Navy’s elite unit, also escorted the motor yacht to provide security to the beauty queens on their way to Batangas.

“The security and accommodation rendered by the PN… was a manifestation of the Command’s support and commitment to the tourism initiatives of the national government that promote (a) positive image of the country and help boost its economy,” the Navy said in its statement. —WITH A REPORT FROM CYNTHIA D. BALANA