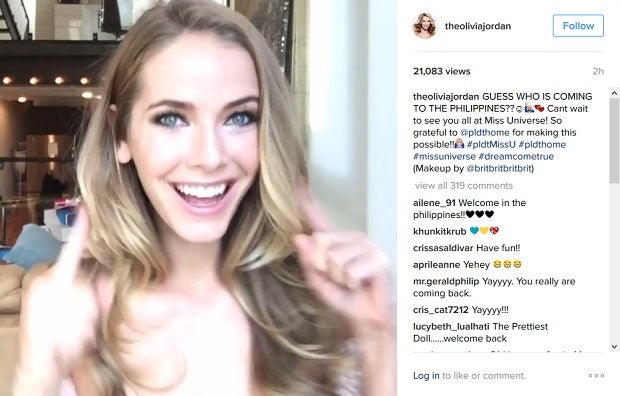 Olivia Jordan to be back to PH for Miss Universe tilt

Miss Universe 2015 second runner-up Olivia Jordan from the United States will be back to the Philippines for the Miss Universe 2016 coronation which going to be held in the country on January 30.

Jordan on Friday announced that she will be coming to the country on Instagram.

“GUESS WHO IS COMING TO THE PHILIPPINES?? Can’t wait to see you all at Miss Universe!” She wrote.

Filipino netizens expressed their excitement by commenting on Jordan’s post.

Reigning Miss Universe Pia Wurtzbach, a close friend of Jordan, earlier asked her social media followers if they want to see the Miss Universe 2015 second-runner up in the next edition of the international pageant.

“Hearts if you want to see her at the next Miss Universe competition,” Wurtzbach wrote, with a clip of her “woman crush” Jordan.

Jordan sat as one of the judges for Binibining Pilipinas 2016, which chose the representatives of the country in the Miss Universe and other international pageants.

The next Miss Universe pageant will be held at the Mall of Asia Arena on January 30. RAM