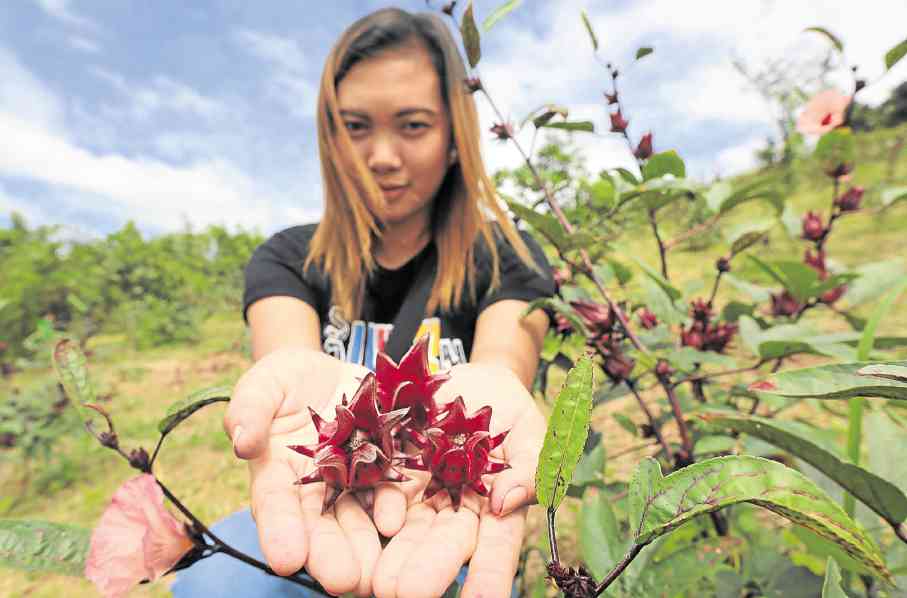 Working the soil wasn’t her thing, Elizabeth Protacio de Castro, 64, realized, when she tried gardening in their Quezon City home. “Working under the sun darkened my skin,” she said. “Digging up the soil also ruined my manicure.”

But seeing life sprout from the earth proved therapeutic for the former activist who was then suffering from depression. As a Unicef consultant and martial law detainee who had set up a rehab center for children of political prisoners, her work and advocacy for close to 30 years dwelled on violence, torture, war and trauma.

De Castro’s consultancy in Thailand in 2005 and 2006 proved to be the tipping point. Working with survivors of the Indian Ocean tsunami, she was confronted daily with “bodies piled sky high” and devastating scenes of loss and grief. She came home feeling sick, she said. “I felt disconnected—lutang—like I had lost my anchor because my family did not want to join me in Thailand. I withdrew from friends, stopped going to church and took a sick leave from teaching psychology at UP Diliman.”

When her husband, Tony, encouraged her to join him in organic farming, she gave in “somewhat reluctantly.” But as she watched plants slowly poking out of the earth, she began “to feel really good—happy, energized and invigorated by the experience.”

It was the beginning of her epiphany, De Castro said. Life, she realized, “was full of nature, just as nature was full of life.” Organic farming became her therapy and soon enough, she found she was no longer depressed.  She’s back to teaching eco-psychology at UP, which is focused “on the psycho-spiritual benefits of farming.”

Thanks to leaders of Shumei Natural Agriculture, a movement that introduced people to their spiritual connection to nature, De Castro said she learned “that agriculture is more than techniques and technology. It is more about working in harmony with nature.”

It was a philosophy that the De Castros practised assiduously in their farm in Tanay, where the couple started cultivating roselle (Hibiscus sabadariffa), a flowering plant from the same family as gumamela, but whose calyx matures into a fruit that can be turned into tea, juice or jam. With funding from the United Nations Development Programme, the coupleturned roselle farming into a livelihood project for the Dumagats of Daraitan and the Sierra Madre mountains. Working with the marginalized was nothing new to De Castro, a UP Psychology graduate, who was “an activist in the ’70s when everybody else was one.”

It was in the student movement that she met former husband, trade unionist Alex Marcelino, a grandson of singer Atang dela Rama, who was married to National Artist and nationalist writer Amado Hernandez.

De Castro was arrested in 1982 along with 17 others when the group of trade unionists was planning a big strike in Novaliches. When the women came looking for their men in the unionists’ UG house, the military were waiting and hauled them in.

“We were 24 women brought to a military safehouse where, if no one asked about you within two weeks, you’d most likely disappear—salvaged,” said De Castro, using the martial law euphemism to describe summary execution by military forces. Her family ties to a Navy commodore and an Air Force general proved providential.

“I was tortured psychologically and deprived of food, drinks and medicine. But I got better treatment than other detainees because of my father,  Commodore Alfredo Protacio of the Navy,” De Castro said. Her father would have been promoted Navy chief were it not for her arrest.

“Marcos told him: how can I promote you when you can’t even discipline your own daughter?,” she recalled of the incident. She was detained for three months.

After her release, De Castro did a thesis on children of political detainees and forthwith was invited to conferences abroad to speak on martial law. As a pioneer on mental health, she got scholarship grants and recognition, including a TOWNS award in 1992. But being exposed to a lot of disasters and violence led to burnout.

Working with members of Shumei, whom the couple met while tending a farm in Iba, Zambales, helped her heal, she said, adding that Shumei’s philosophy on nature also informs their working relationship with the IPs (indigenous people).

That De Castro’s husband, Tony, is himself an environmentalist helps as well. Tony met Beth when she helped sell his Asian Pacific Islander Men 1991 calendar meant to project a more positive image of Asian men in the US.

“In one of my classes, it came out that the out-marriage rate among Filipino women in the US was high, at 38 percent, compared to 5 percent among Chinese women and 9 percent among the Japanese,” said this former professor of Ethnic Studies at the San Francisco State University who migrated to the US with his family when he was 8.

It seems Filipino women did not find Asian men attractive so marrying outside their ethnicity was the norm, he said, adding that a calendar featuring personable Asian “men on the street” was meant to break the Hollywood stereotype of Asian men as cunning villains, geeky nerds or meek sidekicks. Such issues about Asian men being unattractive to women came to fore again when infamous Miss Universe host Steve Harvey recently made a joke on TV denigrating them.

Recalled Tony: “Beth was then a student of a friend who persuaded her to help sell the calendar in the Philippines. She was excited to meet me because she thought I was one of the hunks in the calendar … ‘Where are you? Where are you here?’ she asked and was visibly disappointed when I said I wasn’t a calendar model.”

But the two worked on several projects afterward, among them the “Yosi Kadiri” campaign, said this Fil-Am who, aside from teaching, had also been a photographer and filmmaker in the US. One of their joint projects was Back to the Roots, which had young Fil-Ams going back to the Philippines to rediscover their roots. The two got married in 2000 after Beth’s first marriage was annulled.  They have two adopted sons aged 20 and 22.

The couple’s latest project has them working with the Dumagats, whom they provide with roselle seeds for planting, after which they buy the harvest and process them for selling in organic markets here and abroad. “We wanted to teach them an alternative livelihood.  Later, we found out that they themselves grew a native and smaller version of roselle although they only used its leaves for sour broth (sinigang),” De Castro said.

She also discovered that the Shumei philosophy of revering nature parallels the Dumagats’ indigenous practices handed down by their ancestors. Teaching them to tend roselle plants therefore came easy, and soon, the Dumagats were planting the seasonal bush whose reddish fruits taste like cranberries.  Roselle is easy to cultivate and thrives in tropical countries, De Castro added.

A particular challenge however is the Dumagats’ culture that revolves around “the here and now.”  Explained De Castro: “We wanted to include them in the whole production process—from planting to marketing, so they’d be earning more. But they also have to commit more time for training.”

The Dumagats however said they’d rather just sell their harvest and get the money now, rather than wait for the process to get completed, De Castro said. “Because they said, in the meantime, what will our families eat? So now their elders are weighing their options.”

Business, she said, is picking up, but transportation is a big cost. “It’s not yet a profitable venture because the supply is still low. But in the long run, we see it as a viable livelihood, with orders coming from Japan, Davao, etc.”

The limited supply can be traced to the Dumagats’ reluctance to try something new, De Castro said. “Later, when some of them decided to try out the new venture, ayun na, nag-bandwagon effect but by then, the planting season for roselle was over. If they had planted in June, we could have harvested the fruits in October.”

Despite the initial kinks, the Dumagats find the project promising.

“I used to plant fruits, gabi (yam) and vegetables that I would sell in the market in Tanay,” said Octavio Pranada, 61, who now also plants roselle in his one-hectare plot.

The roselle he planted would bring in extra cash that would go a long way in their barangay of some 500 families of Dumagats and Remontados, Pranada said. The Dumagats tend to have big families of 6 to 12 children each, with children of 15 considered to be of marrying age. So earnings from cash crops are hardly enough for basic needs, he added.

Hopefully, he said, roselle—the literal fruits of their labor—would live up to its promise.