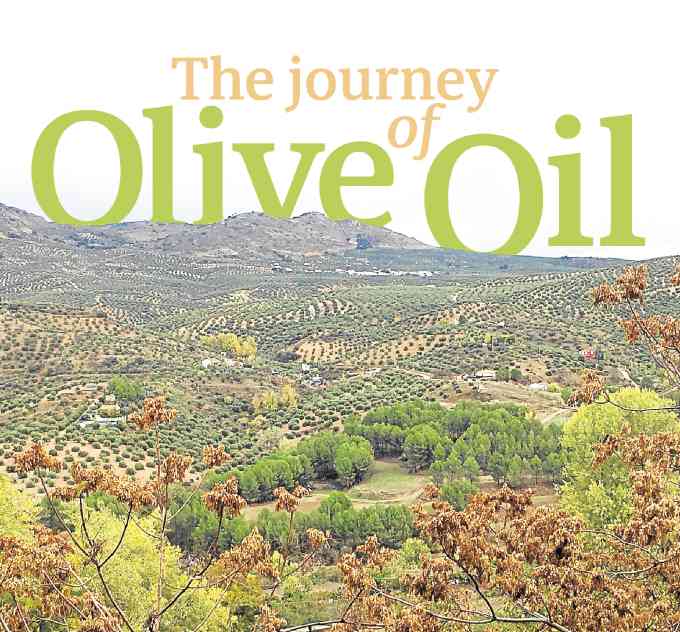 Olive groves on the hills of Priego de Cordoba in Andalusia, Spain

The journey of olive oil

Pedro Rubio de Urquía crushes a manzanilla olive and tosses some of it into his mouth. It’s green, shiny and looks absolutely delicious. “It’s not yet completely ready,” he declares. “But you can already taste the flavors.”

My mouth is watering on the olive farm (known as a finca) of Faroliva S. L. outside Seville, on the grounds of the Hacienda Jalafre, where the manzanilla olives grown almost exclusively in Andalusia, southern Spain, are harvested from 20- to 30-year-old trees grown on rolling hills. “It’s not that simple, though,” says Rubio. “It’s not just from tree to bottle.”

Indeed, for the fruit of a tree that has been around for some 7,000 years, and has come to symbolize such virtues as victory, wisdom and peace—“Except the vine, there is no plant which bears a fruit of as great importance as the olive,” said the Roman philosopher Pliny—the journey is long and nuanced.

Rubio is general manager of Madrid-based agricultural trading firm Agroatlántica, and is long-time consultant to Filipino importer and distributor Fly Ace Corporation. Fly Ace has been bringing olives, olive oil and a host of other food products to Filipino consumers for over 20 years, at what Fly Ace president Lucio “Jun” Cochanco  Jr. calls “value-for-money prices.”

The effort is apparently working, because Doña Elena, Fly Ace’s line of olive oil, in particular, is the market leader, especially among middle-segment Filipino consumers.

Few people know, however, that Doña Elena is a Filipino brand (see sidebar), but everything else—from the olives and oil, to the bottles and labels—are lovingly made in Spain. That’s what we’re here to discover, with Rubio as our erudite host and guide.

On the olive farm, Faroliva managing director Juan Milona-Niñirola Sánchez explains how the fruit is handpicked and olive pickers fill their baskets, called macaco or “monkeys” (because they look like the animals, hanging from the pickers’ chests), and unload them into a big container, which is then brought to the plant.

With a premium put on freshness, the olives are processed within three to four hours, ending up in huge fermentation tanks beneath a cement patio (each tank can hold  tons of olives!), where they bubble away in brine for three to four months.

Rubio calls fermentation the “most important part of processing. It must be correctly done, or the olives will break, will not have the proper quality or good skin, cannot be pitted, and will not maintain color.”

The fact that the approach remains largely artisanal is a marvel, considering that Spain is looking at a production of 320 million kg of olives for 2016-2017; Andalusia is responsible for 80 percent of Spain’s total table olive production.

There are, of course, more industrial farms and production lines, but Rubio and Cochanco are not interested in those. “Here, I can tell you what they are putting in the olives, and it’s not pesticides,” Rubio says.

The olives go through a process of 30 or more steps, including picking, selection, classification by size, and cleaning before they are pitted or stuffed (with everything wonderful, from red peppers to Manchego cheese) and bottled. There are some 200 varieties of table olives, but the manzanilla, its near-twin the hojiblanca, and the fat, juicy gordal are quite popular.

This artisanal approach was driven home to us the day before, when we went to Doña Elena olive oil’s birthplace in Priego de Cordoba, in the southeastern part of Cordoba in Andalusia, near the Subbetica mountains.

Here, the Muela brothers run Mueloliva, an award-winning olive oil production facility. Aside from managing some 2,000 of their own trees, grown in lush rows, Miguel Muela sources olives from smaller farmers all over the area. The whole of Spain—the top producer of olive oil in the world—counts some 2.5 million hectares of olive farms.

Amazingly, 70 percent of that is traditional, non-irrigated farming, relying solely on Mother Nature. “It’s good to expose the trees to extreme climates so they become hardy, not lazy,” says Miguel.

The quality of the Muelas’ production is attributed to the altitude of Priego de Cordoba, between 500 and 1,000 m above sea level, allowing trees to live as long as 80 years; the average-aged ones, however, are “youngsters,” Rubio says, at 30-40 years old.

Outside the plant, the original milling stone first used to crush olives when the company was founded some 70 years ago is still displayed, as well as an old glass dispenser from the days when people would bring their own refillable jars when buying oil. Other than that, the 20,000-sq m mill, the almazara de Muela, is a state-of-the art, spotless operation.

Export manager Mateo Muela, Miguel’s older brother, shows us the entire process, starting with the pits where small farmers can literally dump their produce for weighing and classification. “Two kinds of olives enter the mill—olives picked from the tree, first quality olives, and those picked up from the ground, which are second quality, more damaged,” Mateo explains. In terms of variety, three are popularly used here for the oil: hojiblanca, picual and picuda.

A machine removes branches and stems, after which the olives are cleaned, pitted, crushed, and sent for the cold extraction (“cold-pressed” is a dated term, Rubio tells us) of the oil. The plant can process some 50,000 kg of olives in one go, averaging 300,000 kg a day. Again, they move while it’s fresh; within seven to eight hours of their arrival, the olives have produced oil.

Lower quality olive oil is sent to outside refineries. For the top-of-the-line extra-virgin olive oil (EVOO), however, the journey ends here, where it is filtered, blended in dedicated vats (according to the clients’ requirements), bottled and shipped off. “EVOO will lose all flavor if you store it badly, or for more than two years,” Miguel says. “So we have a fast rotation, and keep a low inventory to maintain quality.” In the case of Doña Elena, that’s two months from bottling to shelves, Rubio reveals.

In the end, bottles of olive oil slide smoothly down the assembly line, under watchful eyes, to bring the flavors of the Andalusian countryside to Filipino tables. Rubio hopes people use it a lot, though. “The concept is like good wine,” he says with a chuckle. “Taste, enjoy, then open a second bottle.”