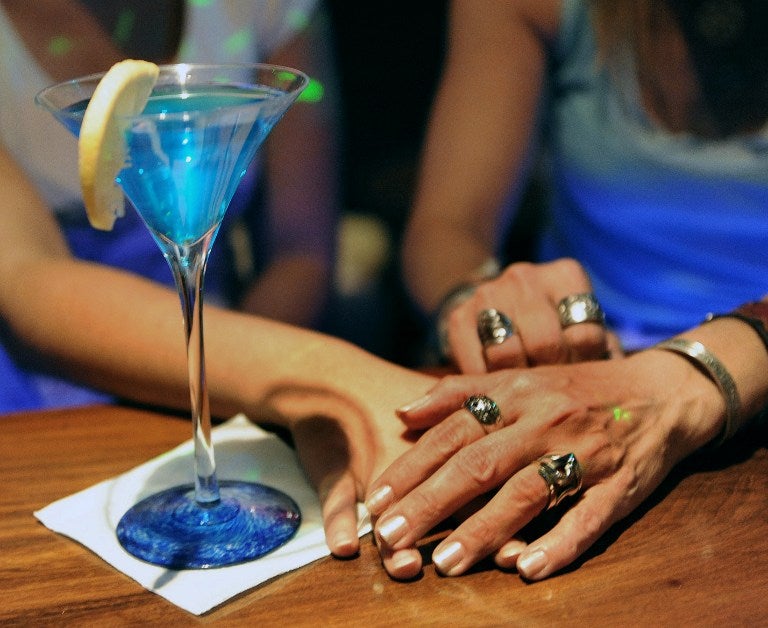 A couple hold hands in a gay-friendly club in Montevideo, on February 3, 2012. Tourism related companies in Uruguay are focusing on an increasing gay tourism, attractive for its spending power. AFP PHOTO/Miguel ROJO / AFP PHOTO / MIGUEL ROJO

MADRID, Spain — The travel sector is jazzing up its offer for gay tourists, who tend to spend more than most when away from home, taking it beyond parties in sunny hubs like Ibiza.

The trend was underscored at the Fitur tourism fair in Madrid, one of the world’s largest, which wraps up on Sunday, where tourism boards plugged cultural attractions and nature activities to this market.

Spain’s western region of Extremadura for example featured posters promoting annual gay pride festivities in the city of Badajoz which began in response to homophobic comments made by a local politician.

But it also promoted bird watching trips, local architecture and rural tourism to gay and lesbian travellers at a special section of the fair dedicated to the market segment.

The goal is to appeal to the growing number of gay and lesbian couples who are having children, said Hugo Alonso of the Extremadura’s tourism promotion agency at the fair.

“We are interested in volume,” he said. Gay and lesbians make up around 10 percent of all tourists, he said.

But for most destinations this segment is attractive because gays travel all year round since they are rarely tied down by school holidays, and spend more on trips.

“The have more disposable income” since there are fewer couples with children, said Juan Pedro Tudeal, the director of Diversity Consulting International, a Spanish firm which advises firms targeting the gay and lesbian market.

While it is difficult to estimate how much gay travellers spend, the United Nations World Tourism Organization said in a recent report that “there is no denying” that they “are a dynamic and influential segment within the tourism sector”.

The Spanish capital generated about 150 million euros ($160 million) from its annual gay-pride festivities last summer which feature one of the world’s biggest pride marches.

The windfall is expected to be even higher this year as Madrid will host World Pride in late June and early July.

Some three million people are expected to take part in the event. Spanish airline Iberia as well as several hotels have launched special offers for this time of the year to appeal to gay travellers.

Pride festivities are used by many Spanish coastal destinations to attract gay travellers outside of their high season.

The beach resort of Maspalomas on Spain’s Canary Islands stages three pride events each year, which generate up to 20 million euros each, said the organiser of the event, Fernando Ilarduya.

There has also been a boom in the number of cruises, vacation clubs and bungalows geared specifically at the gay market.

“Certain details make the trip more enjoyable, like for example a hotel that does not provide separate beds to two women who book a room together,” said Marion Couturier of event management agency Hansen&Partner.

While destinations like Spain – which was one of the first nations to legalise gay marriage- , Thailand and Bali are already well established as “gay friendly”, others are seeking to follow their example.

At Fitur, Argentina’s tourism board highlighted in its brochures that it was the first nation in Latin America to approve gay marriage while Colombia promoted several destinations specifically for gays.

But Bomkes warned that some gay people may actually be turned off by special offers and package tours that openly target the gay community.

“It can be difficult to reach the target group: some people don’t want these special offers,” he said.

“Most of them are very educated. They know how to book everything by themselves.”

The “gay friendly” reputation of a hotel trails location and the price-quality relationship as the most important factor when a gay tourists books accommodation, according to Community Marketing, a US gay marketing firm.

Some firms have begun to focus exclusively on the lesbian segment, which is now “booming” after initially lagging behind the gay male segment, according to Couturier.

“Men prefer urban tourism, while women are looking for outdoor activities, culture, gastronomy,” added Sylvia Lacosta who runs a travel agency in Tenerife that focuses on the lesbian market. CBB