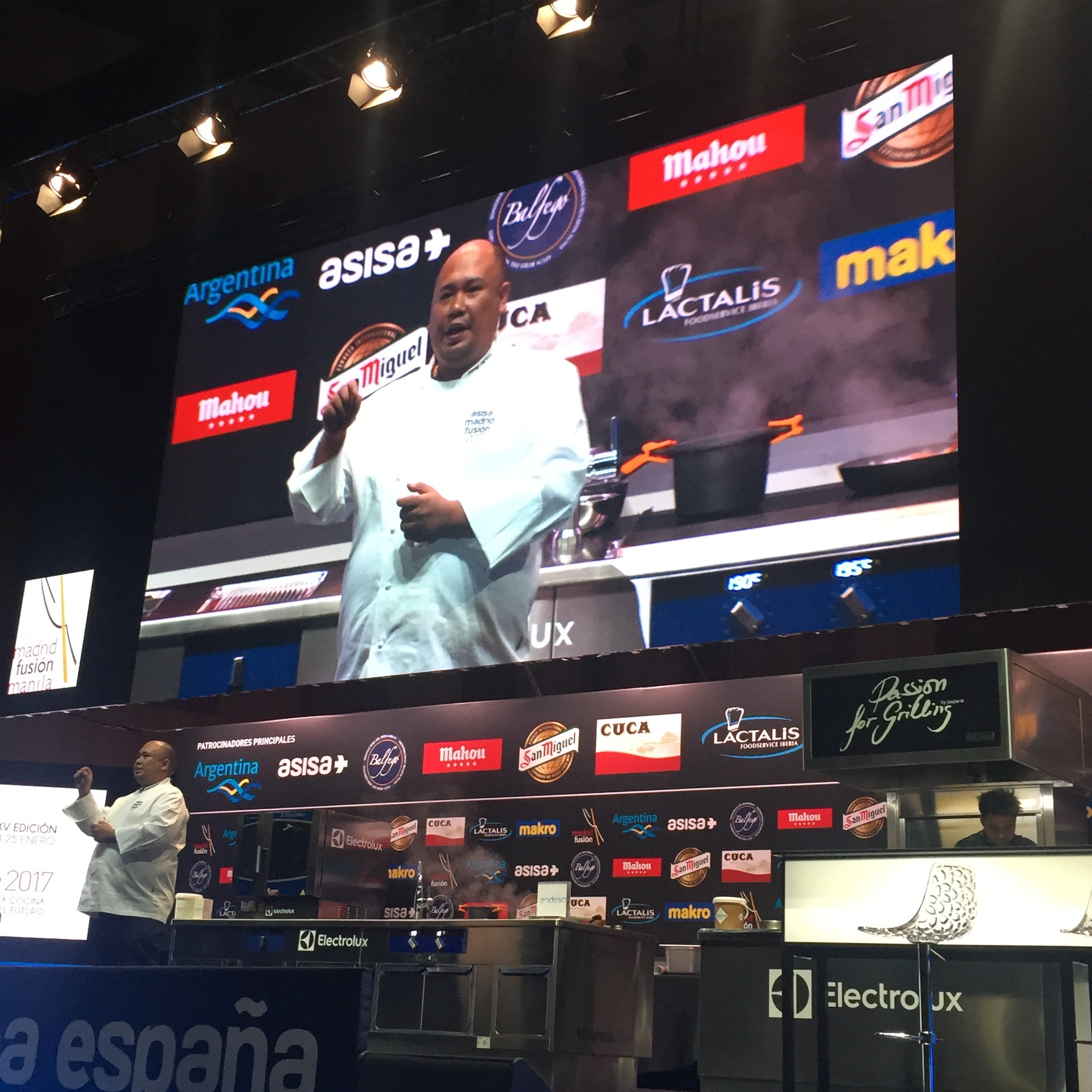 Chef Tatung on the big stage

Madrid, Spain. – “I did not feel too pressured going into my presentation, since I knew what I wanted to say by heart. In fact, I did not prepare a speech,” says Myke “Tatung” Sarthou, who was invited to be the lone Filipino guest speaker in this year’s Asisa Madrid Fusion 2017.

Picking up from where chefs Margarita Forés, Myrna Segismundo and Chele Gonzalez left off the last two consecutive years, Tatung took the big stage at the Palacio Municipal de Congresos last Tuesday and gave guests something to definitely chew on.

For his 30-minute talk, he discussed two things, which he holds close to heart—salt and Mindanao cuisine.

“My interest in salt is borne out of my frustration with the quality of salt in the market,” says Sarthou. “In the process, I stumbled upon the issues affecting it.”

As for Mindanao, he has always been fascinated with the culture of that region, more specifically that of the tribal and indigenous groups. In fact, that was what he discussed in Madrid Fusion Manila 2016. “I feel that it offers clues to what our original culture was, and ultimately who I am. Culinary-wise, the discovery really excites me.”

“This is a story of something small, a tiny speck, that can make a big difference,” started his beautiful video. In it, he meets Gerard Khonghun, the country’s only salt engineer and the operations manager of Salinas, which operates a 500-ha salt farm in Bolinao, Pangasinan. The two briefly take the audience through the process of making the popular seasoning, then Tatung proceeds to meet and talk to producers of food products that rely heavily on salt, namely bagoong, tinapa and buro.

For the other half of his presentation, he played another video which has him in the middle of busy Quiapo, where the Manila Golden Mosque is located. There, he has a rendezvous with a Muslim cook teaches him how to make palapa, a traditional Maranao condiment. He buys the ingredients in the market—red bird’s eye chili, grated coconut which he toasts on a dry pan, ginger, and sakurab—and sautés them until dry and ready for consumption.

Another popular ingredient in southern Philippines is burnt coconut, used for making two dishes also featured in his video—tiyulah itum, which is akin to a beef stew, and chicken pianggang, which has the meat marinating in a ground charcoal-like rub, braised in coconut milk then grilled.
“There are traces of indigenous cooking we find in isolated subcultures in Philippine society. These treasures are being slowly rediscovered as we probe deeper into our own cuisine,” says Tatung.

Since he holds both subjects close to his heart, talking about them to the international audience at Madrid Fusion did not prove to be a chore. “I said to myself that what I was sharing is important not just to the food convention’s audience, but also to the rest of the Filipinos. I wanted to get my story and my message out as truthfully as possible, because they are real issues that affect not only cuisine but the whole gastronomy.” Judging from the way the crowd positively reacted to his talk, he definitely succeeded in getting his message across.
Madrid Fusion Manila will take place in Manila this April 6-8. For more details, please log on to madridfusionmnila.com