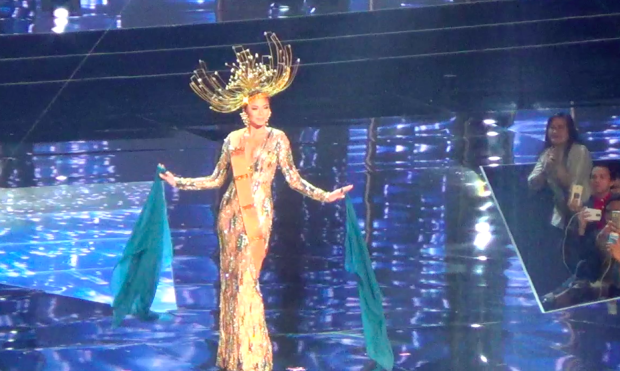 Maxine Medina, the Philipppines’ bet to the 2016 Miss Universe pageant, in her national costume. (Photo by CATHY MIRANDA/Inquirer.net)

Bb. Pilipinas Maxine Medina major mistake in a video screened during the preliminary competition of the Miss Universe held on Thursday night: She claimed it was Imelda Marcos, wife of the late dictator Ferdinand Marcos, who invented the traditional terno.

“The terno was actually invented by our former first lady, Imelda Marcos. She invented these butterfly sleeves and they use it (to) cover their face,” Medina said in the video, which was shot during an ancillary event in Vigan, where the Miss Universe candidates paraded in terno.

Ramon Valera, national artist for fashion design, is widely believed to have introduced the terno by unifying the baro’t saya into a single dress while exaggerating the bell sleeves during the early ’40’s, according to the National Commission for Culture and the Arts (NCAA).

The history of the terno was traced to a collective effort of various designers as Philippine fashion evolved, according to Gino Gonzales and Mark Lewis Higgins in their book “Fashionable Filipinas: An Evolution of the Philippine National Dress in Photographs, 1860-1960.”

In an Inquirer report, Gonzales was quoted as saying that Valera did not create the terno.

READ: What you didn’t know about the ‘terno’–and no, it wasn’t Ramon Valera who invented it

“We want to correct some misconceptions, including the idea that Ramon Valera invented the terno; he did not,” Gonzales said in the report.

“No one person invented it,” he added. “It was a collective effort. The removal of the pañuelo, which is usually attributed to Valera, happened way, way before [he removed it]. Women have been trying to remove it way before.”

Medina would have been correct had she said that Imelda Marcos popularized the terno by wearing it at official functions when she was still first lady.

She became an icon of Philippine fashion, at the same time a symbol of extravagant living while Filipinos were poor and hungry at the height of her husband’s brutal martial law regime. /ATM