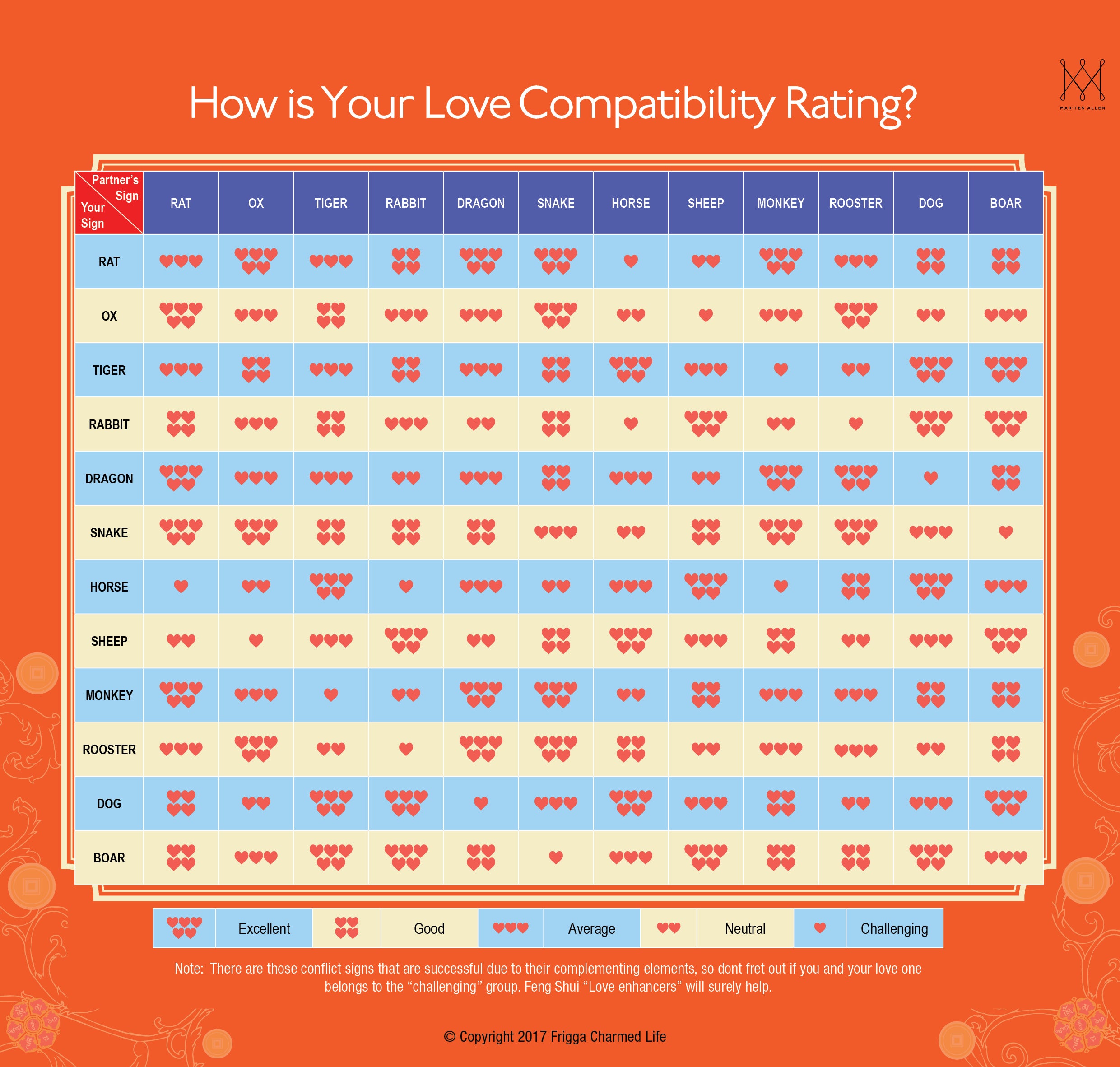 Feng shui master Marites Allen takes "What's your Sign?" to a whole new level with this chart that helps lovers find out whether they are compatible. (Chart reprinted with permission from FRIGGA Charmed Life)

Singles will find romance in Year of Fire Rooster

People who are single, especially those born in the years of the Rat, Dragon and Monkey, will have luck in starting new relationships because their signs have “Peach Blossom Luck.”

Allen, a feng shui master, said social media will continue to flex its muscle, the economy is in for a roller-coaster ride, women in power will face challenges, and sex scandals involving high-profile personalities will be regular fare.

“Since the start of the Chinese New Year is before Feb. 4, this means there is ‘Lap Chun’ or the beginning of spring, which is a good sign for making new beginnings and a beautiful springtime,” she added.

Animals of the Chinese zodiac, like human beings, have significant birth information that feng shui masters from the past 10,000 years have arranged into a “Four Pillars Chart” to reveal information about their personalities.

The Rooster, with a Yin Metal element in its birth year, is like a knife that “indicates killings, assassinations, guns and terrorist attacks,” Allen noted.

She added that this strong Metal energy “bodes well for the finance and banking sectors. Expect both good and bad news for these industries in 2017.”

She cautioned, however, that the Rooster’s birth chart also shows Yin Fire on top of Yin Metal which suggests “infighting, tension, demonstrations and a hot and chaotic atmosphere.

“Fire and Metal represent guns, explosives, fire energy, knives and sharp objects which are lethal and can be used to harm or eliminate people,” she pointed out.

The alignment of energies during the Fire Rooster year indicate that the jihadist Islamic State will thrive and would be “hard to contain,” Allen said. Refugees fleeing its terrorist clout will continue their mass migration, she added.

Fire melts Metal, hence “some will conquer great fortunes while others will lose significantly, so be careful not to compromise your principles in order to amass wealth,” she advised.

Allen, the only Filipino to date recognized as “Master of Feng Shui” by the International Feng Shui Association, gave a serious warning about the Illness Star that finds itself in the Northwest sector this year. She said patriarchs or heads of the family could experience health problems because of this.

(Feng shui recognizes Nine Flying Stars that settle on specific compass directions that vary each year. Each Star, such as the Illness Star, possesses a type of energy that influences the direction it occupies each lunar year.)

Allen said diseases related to the circulatory system, specifically hypertension and strokes; nerve problems, inflammations, skin problems and injuries to the bones, limbs, fingers and toes will occur more frequently. “A serious type of flu pandemic is likely to happen,” she added.

Allen looked back 60 years ago, in 1957, when the last Year of the Fire Rooster occurred, when the Illness Star and Yin Metal reared their ugly heads.

“US President (Dwight) Eisenhower had a stroke, UK Prime Minister Anthony Eden resigned due to ill health, and Indonesia’s President Sukarno was viciously attacked,” she recalled.

Air-related disasters are another possibility, Allen added, noting that it was also in 1957 when the newly reconditioned plane of President Ramon Magsaysay crashed on Mt. Manunggal in Cebu.

Because this year’s Rooster carries fire, expect employees to be “more demanding, aggressive and rebellious. Corporate and government leaders may face heavy manpower turnover.  Most people will just be content to work behind the scenes.  Leaders may face defiant, unruly and hard-to-govern subordinates,” Allen said.

The Fire Rooster also sees “a general decline (for) women in power. Those holding positions may be challenged, their abilities questioned and they may even face long-term lawsuits, injuries and illnesses,” she warned.

She also noted a seeming pattern in years ending in “7” in the past three decades. Allen said the dramatic seizures in the global stock market in 1987, 1997 and 2007 could be replicated this year.

“We need to be watchful around August 2017, as the impact could be devastating,” she said.

Rabbit-born people with weak stars this year are likely to have challenging personal relationships and could be the ones involved in these scandals.

Still, Rabbits and Roosters have the Flower of Romance affecting their relationships this year. Paparazzi better not let Brad Pitt and Angelina Jolie (“Brangelina”) drop from their radars as the Rabbit-born ex-couple are likely to hook up anew, Allen said.

Those wishing to bring their businesses to the next level are advised to create apps, implement new strategies and innovate.

Relationships, emotional, mental and health issues will plague those born in the Year of the Rabbit. “Moving from one place to another whether for residence or work will also be an issue,” she said.

Among movers and shakers, “power grabbing, greed and the desire to secure a steady and strong position will be rampant, even if it means losing family or friends,” Allen noted.