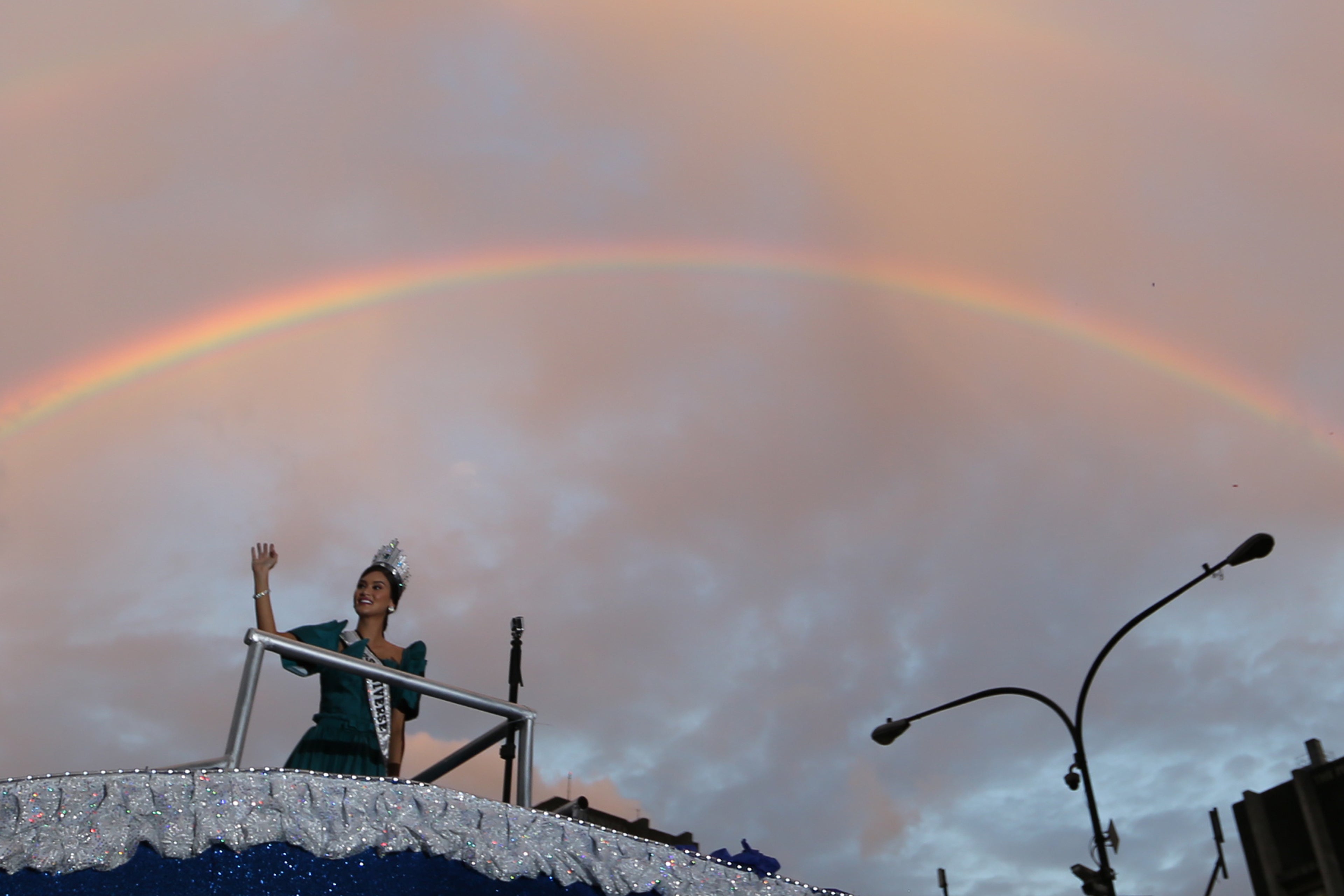 A rainbow appears during the victory parade of 2015 Ms. Universe Pia Wurtzbach of the Philippines along Ayala Avenue, Makati. INQUIRER FILE PHOTO/RAFFY LERMA

Outgoing Miss Universe Pia Wurtzbach wrote an inspiring column on Time Magazine’s newest website “Motto,” sharing her opinion that she can both be a Catholic and a friend of the lesbian, gay, bisexual and transgender (LGBT) community.

Pia made it to Time’s newest website “Motto,” handled by Time Magazine as a venue for celebrities and personalities to express their opinions and make a stand.

Former US President Barack Obama is among the influential personalities to have written for Motto.

In her column titled “Why I Stand Up for LGBTQ Rights in the Philippines,” Pia recounted growing up with Catholic values but never letting these values prevent her from being more open-minded about accepting other people’s sexual orientation and gender identity.

Pia said her mother Cheryl Tyndall raised her and her sister as a single mother in Cagayan De Oro city in Mindanao, a melting pot of different religions and culture.

“Growing up in such a diverse culture taught me the virtue of acceptance early in life and made me recognize that tolerance should be the norm, not the exception,” Pia wrote.

Pia said her Catholic upbringing taught her to accept and respect others, instead of discriminating others based on gender and religion.

“Religious establishments including the Catholic church teach that they are the one true faith, but the values instilled in me as a Christian have encouraged me to respect all beliefs and opinions. Growing up, my family taught me that to receive respect, you must first offer it,” Pia said.

Pia said she was happy the Philippines is becoming more tolerant to the LGBT community, but she could not shake off the feeling the Catholic faith conflicts with her liberal views.

“I am proud that the Philippines is every day becoming a more tolerant community; however, my liberal opinions on many social issues sometimes conflict with Christianity’s teachings,” Pia wrote.

Pia said she owed it to the LGBT community for her success in the pageantry.

The Philippines is known for being home to the most avid beauty pageant fans, primarily led by the gays who make their fascination with beauty pageants their version of the country’s more macho obsession with basketball.

“I myself owe a lot to the LGBTQ community, many of whom are my closest friends. Without their accepting attitudes toward my own flaws and struggles, I would not be where I am today,” Pia said.

Pia lamented that while there is an increasing acceptance for the LGBT community in the Philippines, the sector still does not enjoy the same rights, such as the right to marry or have conjugal rights.

“But while we are beginning to see the seeds of change in the Catholic church, the LGBTQ community in the Philippines doesn’t yet enjoy equal rights,” Pia said.

Pia said she hopes others can follow suit that one can be both a Christian and an advocate for gender rights, and that these do not have to contradict each other.

She said it is precisely her faith that makes her practice her Catholic faith while respecting others.

“Perhaps my non–traditional family unit allowed me to accept others’ differences without judgement and has made me proud to advocate for LGBTQ rights as a Christian,” Pia said.

“In fact, I find the strength to do just that through my faith. Undoubtedly, there will continue to be times when my faith and secular opinions clash, but in those moments, I find comfort in an old saying: ‘Live and let live,'” she added.

Pia is set to relinquish her crown on Jan. 30 during the coronation night of the Miss Universe to be held here in Manila.

Pia once said she is grateful for her LGBT fans, and that as Miss Universe she would represent both men and women, and everyone in between.

After her reign, Pia would be serving as a Miss Universe ambassador, and was also set to appear as special guest in the fifth cycle of the model search “Asia’s Next Top Model.” IDL