‘Once Upon a Mattress’: A charmer, but gone too soon | Inquirer Lifestyle ❮ ❯ 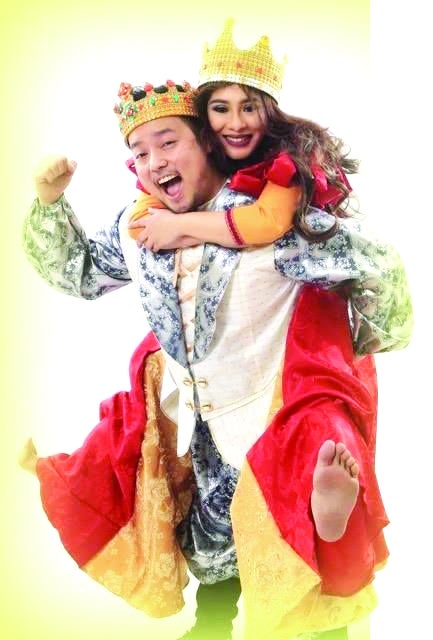 ‘Once Upon a Mattress’: A charmer, but gone too soon

At the start of the Ephesus Teatron Group’s “Once Upon a Mattress,” a minstrel promises a young girl that the show she’s about to see—a supposedly more authentic retelling of the fairy tale “The Princess and the Pea”—will help her learn how to be a true princess.

Nearly three hours later, it was safe to say that “Once Upon a Mattress,” which played for only one weekend at Tanghalang Yaman Lahi in Emilio Aguinaldo College, had delivered on its promise. This Broadway musical written by Jay Thompson, Jean Fuller and Marshall Barer turns the trope on its head and smashes stereotypes with a darker, cheekier take on the Hans Christian Andersen story.

Royal marital discord, with a very unhappy, loudmouthed bully of a queen (Emeline Celis-Guinid) and a randy speech-impaired king (Raymund Concepcion), provides the context to a strange royal edict that says no one in the kingdom can marry unless the chubby, good-hearted Prince Dauntless (Nino Alejandro) has done so.

But the matriarch demands that only a “perfect” princess can marry her boy, stacking the deck against every candidate with ridiculous challenges, such as, for the rough, brash and inelegant Princess Winnifred the Woebegone (Carla Guevara-Laforteza) from the swampland, a test of “sensitivity” by placing a pea under the stack of mattresses serving as her bed.

Winnifred’s candid commoner ways and language, even the masculine nickname “Fred,” drive the queen batty. But they capture Dauntless’ heart and give him the cojones to finally become a man.

Director Steven Conde had a uniformly good cast to work with, many of whom had cut their teeth doing witty English-language productions like this one. His ensemble was a finely tuned engine, with the performers knowing when to pull their punches and when to give the material everything they got. And Carla Guevara-Laforteza as Princess Winnifred owned her role with smashing panache.

The cast’s high energy and peak performances were much needed, because they were what kept the audience glued to their seats throughout a 160-minute show without intermission.

As it was, despite the exuberant atmosphere, the show eventually felt too long. Audience attention wandered off without that traditional calculated break, or the cuts necessary to create a crisper pace.

The material simply had too many subplots, like the romantic trysts of Sir Harry (Hans Eckstein) and Lady Larken (Yanah Laurel) and the loneliness that the Wizard (Onyl Torres) struggled with. Even if they added layering to the characters, they often got in the way of the main story.

And the musical numbers composed by Mary Rodgers and written by Marshall Barer, while lighting up specific scenes, had a dispensable quality to them.

Some moments that intentionally stretched the obvious devices for humor elicited enthusiastic response from the young audience. The fake giant bird trying to keep Winnifred awake with his tweets and chirps, for instance, was a genuine hoot.

Like its main character, this production just needed to refine a bit its rougher edges, and a run longer than one weekend, to allow more people to enjoy its charms. —CONTRIBUTED