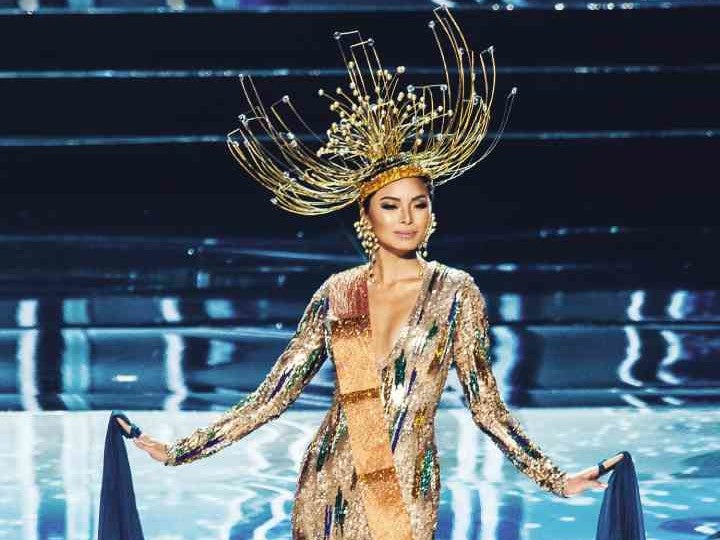 The national costume presentation featured some of the most dazzling outfits, as well as a few bizarre and outrageous pieces, including a castle for a headdress and the Petronas Twin Towers as oversized shoulder pads.

Medina, who showed off her winning form in a two-piece swimsuit with tropical prints, easily reminded the audience of her modeling background with her catwalk skills.

For the much-awaited evening gown round, the 26-year-old interior designer opted for a sleek, crystal-embellished bustier top with a sweetheart neckline and spaghetti straps. The three-tiered fringe skirt also swished playfully as she walked gracefully onstage.

The gown’s emerald green shade, a homage to the “Pantone color of the year,” also made Medina stand out in a sea of metallic dresses and gowns in bright scarlet or translucent nudes, a staple in beauty pageants.

For the national costume show, Medina sashayed in a vinta-inspired number with geometric patterns that was set off by an alampay (native shawl) draped over her shoulder.

An intricate headpiece, using a million-peso worth of pearls from Jewelmer, and matching pearl-encrusted chandelier earrings, completed the look.

Filipino designer Rhett Eala, who made Medina’s dresses in the Binibining Pilipinas pageant last year, designed both her evening gown and national costume for this year’s Miss Universe competition.

The preliminary swimsuit and evening gown competitions make up two-thirds of the prepageant contests that will determine the Top 12 semifinalists at the Miss Universe finals on Jan. 30.

The Thursday night scores will also be combined with those from the closed-door panel interview of the beauty queens on Wednesday, to determine those who will advance to the next stage of the competition.

At the finals night, the Top 12 candidates will again compete in a swimsuit round to vie for a slot in the Top 9.

The next stage will be the evening gown round, which will determine the Top 6 ladies qualified to proceed to the grueling question-and-answer portion. From there, the Top 3 candidates will emerge. A final look by the judges and the viewers at home will result in the women’s ranking based on their performances in all the rounds of the competition.

Women of color Mary Esther Were of Kenya, Raissa Santana of Brazil, Raquel Pelissier of Haiti and Deshauna Barber from the United States enjoyed huge support from the audience as well.

And so did part-Filipino Tania Dawson from New Zealand, whose mother is from the province of Pangasinan.

But it was not only the candidates who received the audience’s love.

Former Miss Universe Dayanara Torres from Puerto Rico, who relinquished her title during the Philippines’ staging of the pageant in 1994, could not contain her emotions when the crowd warmly welcomed her back as one of the night’s judges.

At the national costume show, which followed the preliminary competitions, the candidates proved themselves real troopers as they labored under huge accessories and props that were part of their sometimes outrageous outfits.

Mauritius’ Kushboo Ramnawaj’s volcano-inspired costume was designed and created by a Filipino designer, and was handpainted by wards of a charity organization in Manila.

Several beauty queens also proved themselves bird of a feather with similar winged outfits, although the most bizarre presentation came from Myanmar’s Htet Htet Htun, who pulled aside the curtain of the huge wall she carried on her back to reveal a theatrical stage background where she mimicked a marionette, complete with strings attached to her limbs.

This is the third time that the Philippines has hosted the global tilt, with the previous ones held in 1994 and 1974, when Filipino beauty queen Margarita Moran relinquished her title to Spain’s first winner Amparo Muñoz.

In 1994, India bagged its first victory through Sushmita Sen, who will be a judge in this year’s Miss Universe finals.