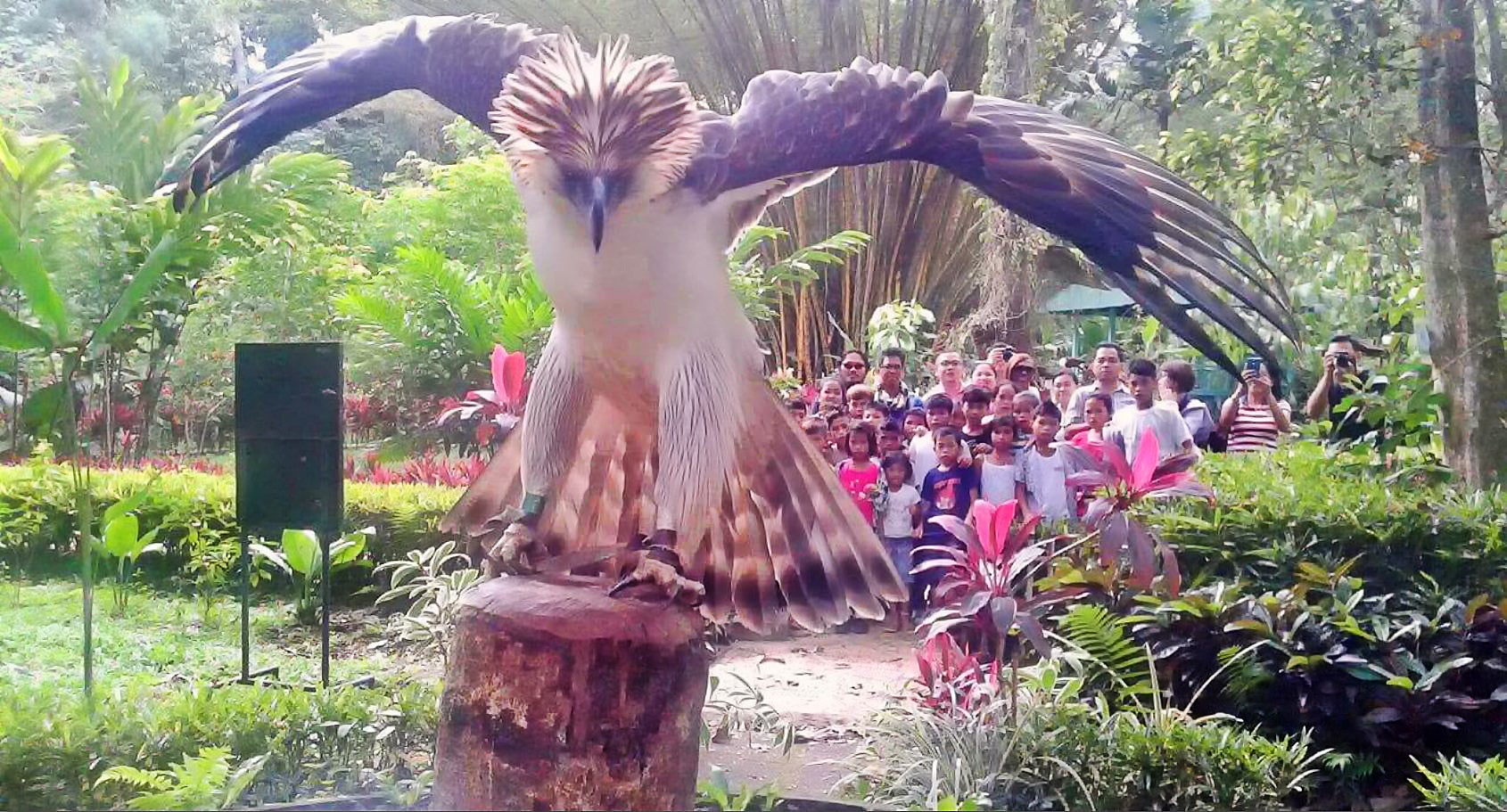 A live Philippine eagle named Mindanao, with students from the Bagobo-Tagabawa tribe in the background

On two recent occasions, we grabbed the opportunity to visit Davao City again and discover more things about this premier tourist hub of Mindanao, which has gained more prominence with the election of its long-time mayor, Rodrigo Duterte, as the country’s 16th president.

The early morning drive to the Philippine Eagle Center (PEC) in Malagos, Baguio District in Davao City, took our memory back to the late 1980s, when Joey Ayala invited us to stay for a week at his house at that time in DBP Village along Maa Road. Ayala was then an emerging singer-songwriter known for his socially conscious music. One of his songs, “Agila,” was about saving the Philippine eagle.

The simulated tropical rainforest environment at PEC, which lies near the foot of the country’s highest peak, Mt.  Apo, is home to 36 Philippine eagles, 18 of which are captive-bred or raised in safe conditions. Also here are 10 other species of birds, four species of mammals and two species of reptiles.

On this day, the Philippine Eagle Foundation (PEF)—which operates the PEC to promote the survival of the endangered Philippine eagle—and Cemex Philippines Foundation have organized an educational outreach activity for students, all from the Bagobo-Tagabawa tribe and residents of Sitio Kabagaayan which also sits near Mt. Apo.

In the next five hours, PEF tour guides gave the students a wonderful time to engage in bird watching, nature discovery walk, animal encounter, interactive storytelling and games—all aimed to awaken the kids’ interest in caring for an environment necessary for the survival of the Philippine eagle.

Author Blas Tabaranza Jr. wrote that it’s “considered the largest of the extant eagles in the world in terms of length and wing surface.” Among the rarest and most powerful birds in the world, it has been declared the Philippine national bird. It is critically endangered mainly due to massive loss of habitat due to deforestation in most of its range.

Killing a Philippine eagle is punishable under Philippine law by 12 years in jail and heavy fines.

Also present at the tour was Chito Maniago, executive director of Cemex Philippines Foundation which has given PEF a three-year grant that includes educational outreach activities in seven eagle habitats, and the organization of 100 forest guards.

Providing for the needs of the Philippine eagle entails quite a sum, and the involvement of organizations such as Cemex is much welcome.

Up close with one of the eagles, named Mindanao, we took note of its presence—magnificent like a king, intimidating and fearsome in looks, awesome when spreading its wings, and yet vulnerable to danger if left alone in a harsh environment.

But there’s hope yet, as PEF staff revealed there have been some 400 sightings of Philippine eagles outside Davao—which means that, one fine day, they might be free to fly high again in the wilds.

Davao is likewise home to Blue Posts Boiling Crabs & Shrimps—a restaurant owned by husband-and-wife Anthony and Jen Ang, whose visit to Fisherman’s Wharf in San Francisco inspired them to open their own dining place.

The difference, Anthony says, is that he has tweaked the cooking of the crabs to suit the Filipino palate.

Blue Posts—originally named after the couple’s first venture, a bar, also located in Davao—opened three years ago and has quickly expanded to three branches, plus several franchises in Metro Manila (one in SM North Edsa, and opening soon in SM Mall of Asia, SM Megamall, O-Square Greenhills Shopping Center  and Seascape Manila).

The latest branch in Davao, on the ground floor of SM Ecoland, had a grand opening on Jan.  21 which saw dozens of guests savoring its specialty crabs boiled and lathered in signature Blue Posts Cajun special sauce (with a choice of regular, mild or spicy hot); garlic fried; garlic lemon butter sauce; Sambal paste (hot sauce of Javanese origin); and salted egg.

Just when we were about to get satiated, other dishes were served: roasted native chicken, sinuglaw (kinilaw in Tagalog) na liempo and tuna with green apples, and pomelo salad.

Blue Posts has partnered with Nestle to offer an all-you-can-drink iced tea with six flavors available at its Mixology Bar.

For those who worry that crabs can cause high-blood pressure, the trick is to share the dish with the whole family.

Crabs are eaten with the hands and it’s messy—but that’s part of the fun that starts with putting on a bib, cracking the sipit with a mallet, and picking the meat slowly before dipping it in sauce.

It was a filling way to destress from backbreaking deskwork.