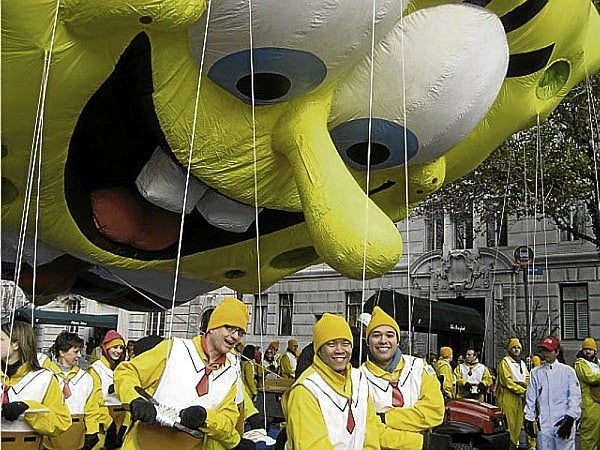 Tales of a balloon boy 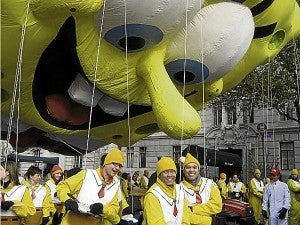 Growing up, I could not imagine a holiday bigger than Christmas. Then I moved to the United States and gained a new holiday—Thanksgiving.

Celebrated every third Thursday of November, Thanksgiving is the official start of the holiday season. It was unfamiliar yet and similar, festive and understated. It involves a lot of eating (and gorging on turkey) and when you think about it, it almost sounds like a typical Filipino gathering. It is an ode to gratitude and the harvest season where family and friends celebrate and gather around to give thanks to one another.

Thanksgiving for me is celebrating the people I love and care about. It’s being thankful for my family, friends and for everyone who made a difference in my life. It’s for people who make us feel special, who loved and loves us, even for difficult people who challenges us. It’s about wonderful shared experiences and creating more beautiful memories, it’s about being thankful for all the affirmations and love. 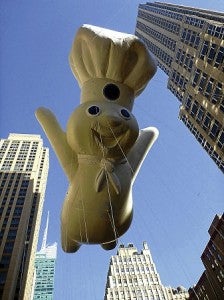 For some people, it’s an excuse to shop. Black Friday is retailer heaven. They lure shoppers with their must-have goods of the season. Stores open as early as midnight with people camping out to take part in the madness. Everything is ridiculously discounted during this unofficial holiday. But this phenomenon hasn’t really appealed to me and I’d like it to stay that way.

In New York City, Thanksgiving would not be complete without the Macy’s Thanksgiving Day Parade. Giant balloons, dozens of celebrities on floats, hundreds of volunteers and millions of spectators gather for this event. This tradition has been a staple for over eight decades. Unfortunately, it’s been turned into an advertising machine. The original balloons that made it a spectacle are now dwarfed by corporate mascots. Despite this, its goal remains the same—to bring delight to the spectators. In case you’re interested to view it in person, planning usually takes to a year, especially when you want to be in the comforts of a hotel room along the route. For people who can’t afford that luxury, they stay in and watch it on TV or brave the crowd and wait along the route. Ideally, you need to be there a couple of hours before it starts to get a decent spot. As for me, I haven’t actually seen the parade—because I’m part of the parade.

For four years now, I’ve been volunteering as a balloon handler for the Macy’s Thanksgiving Day Parade. My good friend Harry, a seasoned balloon captain, recruited me and my friends. It was an opportunity that used to be offered only to Macy’s employees but they recently opened it to friends and family. 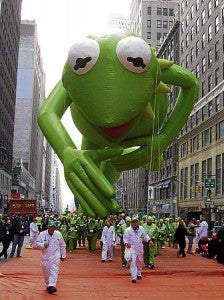 Training to be a handler is no joke. You have to be a certain weight and a certain height, or else the balloon would carry you away and they don’t want that to happen. After a day of training, you’re almost certified to be in the parade. Balloon assignments are random, but you don’t have a say where you would be. My first year was with Sponge Bob and for the remainder, we were with the Pillsbury Dough Boy.

Preparation for parade starts the night before, with balloon inflation around the Natural History Museum by Central Park West. Come parade day, we’re up by 4 a.m. and at the New Yorker Hotel by 5:30 a.m. to get in gear. By this time, hundreds of volunteers are eager and ready to get the show started. It takes about an hour to get where you need to be, get fitted in uniforms and costumes and be loaded on a bus that takes you to the site. Despite being sleep-deprived, it’s very cool to see what goes on behind the scenes. It’s chaotic yet everybody is in high spirits. At 7 a.m., handlers are rallied and given a pep talk by their captains and pilots. You are given one last chance for a bathroom break at 8 a.m. and then you take your place under the balloons (it’s first come first served). At 9 a.m., balloons join the parade and for three hours, they delight everyone who 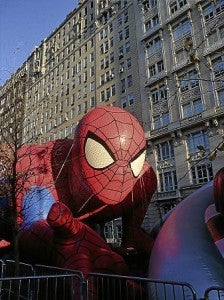 have gathered for the event. Once you’re in the parade, you can see that everybody is cheering. The crowd’s anticipation is priceless, especially the looks on the kids’ faces. They gasp and clap for their favorite balloons. It goes on for over 50 blocks but because of adrenaline, it goes by so quickly. It’s an amazing rush!

The first couple of years we were all about being on TV. But that never happened, none of our friends ever saw us on their small screens. But it finally happened this year—after I gave up on the idea. Our TV moment came after they showed our balloon. They panned the camera toward the handlers and there I was, shamelessly waving to the crowd and the camera. My phone went crazy after. Friends were ecstatic to see us on—even those who are in Manila.

It was truly gratifying to be part of a NYC tradition. To experience the parade from a different perspective is something worth reliving every year. I will surely be part of it for as long as I can.