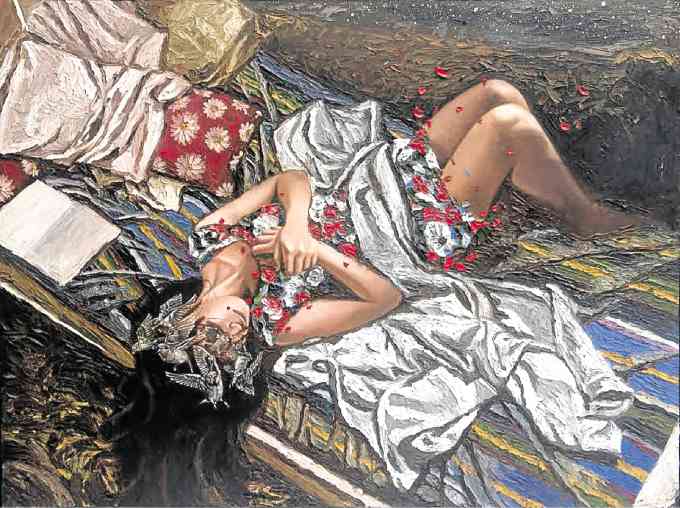 A lady in a pink dress reclines on her side on a gently sloping grassy hill. In the distance are two farmhouses grayed with age.

This is the subject of the painting “Christina’s World” by Andrew Wyeth, one of the most famous paintings in the Museum of Modern Art in New York, and part of the core collection donated by Alfred Barr, its founding director.

Three young artists from Bulacan—Don Bryan Bunag, Lawrence Cervantes and Marvin Quizon—reinterpret the romanticized landscape and woman in the exhibit “After Christina’s World.”
The bucolic rice fields of Bulacan and its pretty women, have been immortalized in many of Fernando Amorsolo’s early works.

Both Bunag and Quizon focus on farmhouses, not Filipino nipa huts or bahay-na-bato, but Wyeth’s gray farmhouses and solitary woman. Bunag breaks the verisimilitude by intervening and breaking the picture as it were a framed photograph punched and smashed.

Cervantes makes use of magic realism in portraying his female subjects. —CONTRIBUTED

“After Christina’s World” runs until Jan. 31 at Galerie Stephanie, then until Feb. 7 at 8 Rockwell, with an artist reception on Feb. 1.