Miss Universe to be crowned in the Philippines | Inquirer Lifestyle ❮ ❯ 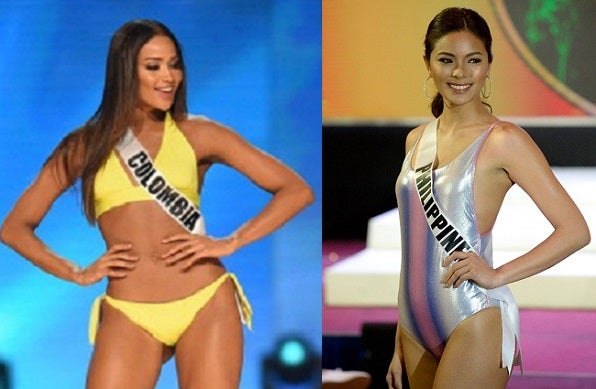 This photo taken on January 26, 2017 shows Miss Universe contestant Andrea Tovar of Colombia in her siwmsuit during the preliminary competition of the Miss Universe pageant at the Mall of Asia arena in Manila. / AFP PHOTO / TED ALJIBE

Miss Universe to be crowned in the Philippines

Eighty-six of the world’s most beautiful women will be vying for the Miss Universe crown Monday as the Philippines — last year’s winner — stages the beauty contest in a bid to boost tourism and investment.

Last year’s host, Emmy Award winner Steve Harvey — who shot to notoriety for initially announcing the wrong winner — returns for this year’s three-hour pageant that starts at 8:00 am (0000 GMT) in Manila.

Latin American beauties led by Miss Colombia Andrea Tovar and Miss Peru’s Valeria Piazza were the odds-on favorites for the crown according to online betting sites.

Marina Jacoby, only the second black woman to be crowned Miss Brazil, is also touted as a possible winner.

The contestants also include Deshauna Barber of the US Army Reserve, the first active-duty soldier to win the Miss USA title.

Beauty contests are phenomenally popular in the Philippines, and the pageant will be broadcast live across the country.

But President Rodrigo Duterte’s government rejected popular calls to declare a national holiday for the event.

Monday’s show is to be headlined by US performers including Grammy award-winning rhythm and blues group Boyz II Men and rapper and Grammy award nominee Flo Rida.

Pia Wurtzbach of the Philippines currently holds the crown, following a comical error in which host Harvey mistakenly awarded the title to Miss Colombia.

The Philippine tourism ministry on Saturday reached out to the American actor-comedian, saying he has “millions of excited fans in the Philippines who look forward to having him”.

Manila agreed to host the pageant as part of efforts to draw tourists and investors to the developing Asian nation’s high-flying economy, now one of the fastest-growing in Asia.

“We… throw our support for the Miss Philippines candidate Maxine Medina who deserves all the moral boost she can get for working very hard and giving her best in a competition that promotes goodwill and friendship among nations,” Duterte’s spokesman Ernesto Abella said.

Allowing Manila to host has proved controversial, with critics claiming the pageant would whitewash Duterte’s brutal drug war, which has left more than 6,000 people dead.

And last month environmentalists hit out at pageant organizers for letting the bikini-clad contestants swim with endangered whale sharks. CBB