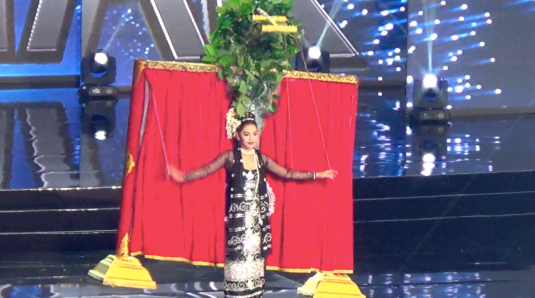 Htun brought her costume on stage – a big backdrop depicting the tourist attractions in Myanmar, the Shwedagon Pagoda and the Bagan temples.

Interviewed by host Steve Harvey, Htun admitted that her costume, which also served as a backdrop for traditional Myanmar puppetry, is heavy at 40 kilograms.

“It seems heavy. I really want to put it down. It weighs approximately 40 kilograms,” she added.

Htun performed as the traditional Myanmar puppet in her costume, to the delight of the crowd. CBB