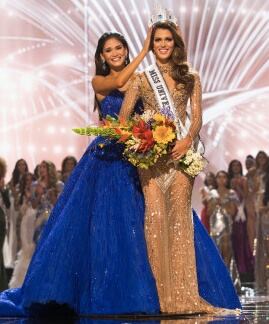 Was Miss France’s answer to the question that mattered most during the final selection of the 65th Miss Universe mistranslated?

In the most crucial moment in the prestigious pageant, it seemed like something wrong happened with Miss France Iris Mittenaere’s answer courtesy of her interpreter.

The final question for the top 3 candidates asked was something like this: “Name something in the course of your life that you failed in and tell us what you learned from that experience.”

Mittenaere, a fifth-year dental surgery student, answered in French and her interpreter translated her reply to English thus, “I failed several times in my life. So I thought I failed the first time I went out on a casting because my name wasn’t on the list.”

Actress/model Solenn Heussaff, who speaks fluent French, immediately took to Twitter and questioned the use of the word “casting.”

Solenn said, “The French translator said: ‘When I missed my first casting but what she really said was 1st year of medicine school.”

French translator said: when i missed my first casting.
But she really said 1st year of Medicine school

The new Miss Universe’s full answer to the question, according to the translator was, “I failed several times in my life. So I thought I failed the first time I went out on a casting because my name wasn’t on the list. And the very next day, I found out that I was in a very new [book]. So I think that when you fail you have to be elevated and you have to try again and keep going. Tonight , if I’m not one of the winners, I would still have had the great honor of being one of the three finalists. So I think that I have failed before, but to me this is a great opportunity.”

Solenn said it was a good thing Miss France’s mistranslated answer did not affect her win. She added that Mittenaere’s remark merited her the crown even without a translator.