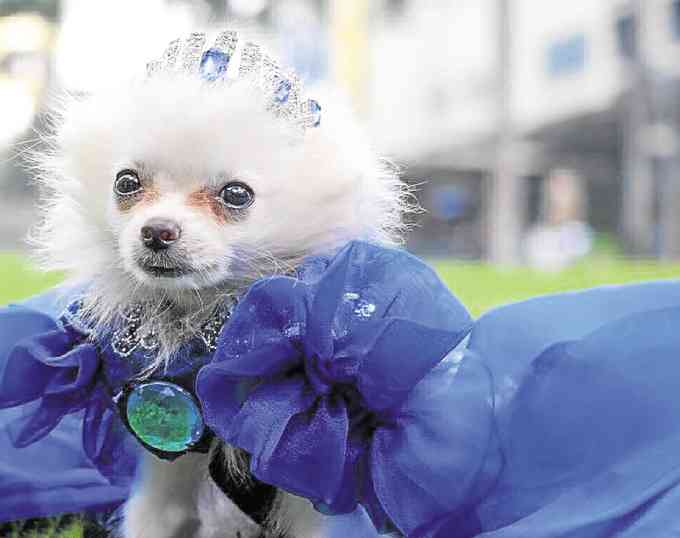 Shirley Moquete was busy backstage, along with two assistants, dolling up her cat Vanilla for the evening gown category.

Vanilla, a rescued Persian mix, looked elegant in her P3,000 purple silk long gown. After a few touches—she was Miss Thailand—the mild-mannered kitty was again ready to face the limelight.

Filipinos may be going gaga over Miss Universe, but pet lovers were busy dressing up their furry babies, vying for the title Miss Unifurs 2016. The “pageant” was held Jan. 15 at Star Mall in Las Piñas—and with each pet came interesting stories of their journey to the finals.

From 130 pets, the judges narrowed down the list to 15 in elimination legs in Sta. Rosa, Daang Hari, Las Piñas and Alabang.

Vanilla, the cat with the fluffy white coat who loves to listen to music while sitting in Moquete’s lap, is one of 78 rescue cats in her household. For the Miss Unifurs 2016, Moquete spent around P20,000 on costumes alone.

“When I rescued her I thought she was a gray cat. Then, after a few months of medication, she turned out to be this white cat,” Moquete recalled.

Vanilla was up against seven other contestants from all over the metro.

Blanche Mapile, whose silver gray toy poodle Athena was Miss France, had the gown especially ordered from a pet couturier in Davao. Surrounded by 13 dogs plus one puppy, Athena is the beauty queen in the pack, and has been joining pet beauty pageants for two years now. She has already won four major awards and special citations.

“I was wondering at first why my Athena wasn’t winning. Then I realized the importance of investing in costumes. I find joy in dressing them up,” said Mapile, who spends some 40 percent of her time taking care of her pack.

Unlike dog shows where pets are judged against the parameters of the idealized version of the breed—the written standards of an ideal pug, for example—pet beauty pageants allow dogs, and their handlers, to preen in elaborate gowns and costumes.

“We wanted to mimic the Miss Universe contest. As far as I know, this is a first of its kind,” said Anna de Leon of pageant organizer Salt ’n’ Pepper. “There’s even a Q&A portion for the handlers, with questions relevant to the lives of pets, such as, ‘Do you believe pets should be off-leash in public parks?’ Miss Unifurs is really like the Miss Universe—beauty with a purpose.”

For each category, handlers’ costumes must match the costumes of their pets. Miss Japan’s handler, for example, chose to dress up in a samurai costume. Naturally, the little pom Caleesi also had a tiny little sword tucked in her costume, just like her handler, Jayson dela Cruz.

“We spent P25,000 for the costumes, all custom-made by a pet couturier,” said Camille, wife of Jayson.

“Pets are not just pets. They are family. They deserve love, care and attention,” he said.

The search for the next Miss Unifurs continues. The Miss Unifurs 2017 elimination leg starts in June this year.