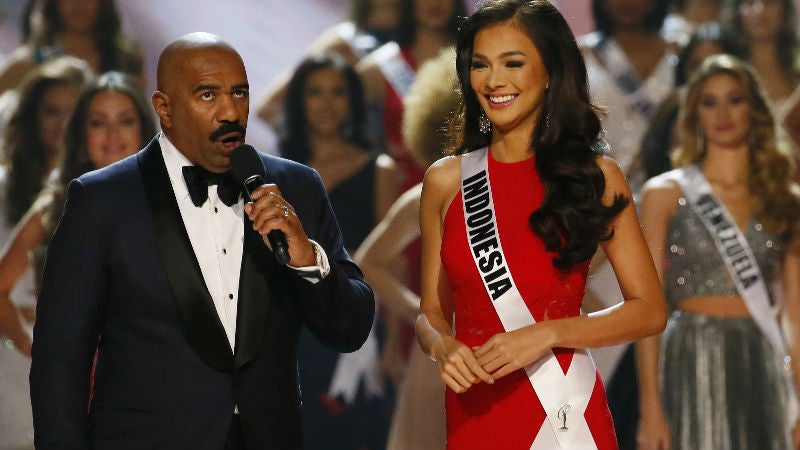 Kezia Warouw of Indonesia prepares to answer a question from host Steve Harvey after making it to the top 13 in the Miss Universe 2016 competition Monday, Jan. 30, 2017, at the Mall of Asia in suburban Pasay city, south of Manila, Philippines. (AP Photo/Bullit Marquez)

Miss U host learns lesson in Las Vegas; no embarrassing mistake in Manila

This time, he got it right.

American television host and comedian Steve Harvey read the correct Miss Universe 2016 from his cue card on Monday, but with a little help from the woman he almost deprived of the crown last year.

“One of you is about to become our new Miss Universe,” he said in his cliff-hanger prelude to the most-awaited announcement.

At the same moment, Harvey bungled big time on the pageant stage a year ago, Miss Universe 2015 Pia Alonzo Wurtzbach, again clad in a blue gown like last year, swung to action this time and handed the host a pair of glasses.

Laughs from the audience cut through the tension, as Miss Haiti Raquel Pelissier and Miss France Iris Mittenaere held hands at center stage, anxious for what Harvey will say next.

After a pause, Harvey read his card and correctly this time: France is Miss Universe, taking the crown after a 63-year drought. Haiti finished first runner-up and Colombia, second runner-up.

No hitches, this time

“I’m Steve Harvey and I got it right!” he said as a seeming mic drop to cap his successful hosting, relieved that he pulled through the gig without hitches.

For Harvey, his fresh chance to host another Miss Universe coronation seen around the world spelled redemption from his epic blunder in Las Vegas, Nevada, when he got it the other way around, naming Wurtzbach the runner-up to Colombia’s Ariadna Gutierrez.

The incident for a time fueled vitriol from and between Colombian and Filipino pageant fans, of which Harvey was keen of throughout the roughly three-hour event in Manila. He opened the pageant with what he knew was on everybody’s mind.

“I know what you’re thinking: ‘Is this the guy from last year?’ I’m back! I’ve had surgery done on my eyes to read the card right,” he joked.

As a visibly anxious Harvey called the Top 13, it seemed fate was really bent on putting the man in a swelter.

First, he called Colombia’s Andrea Tovar the seventh of 13. He appeared scared as she approached, gesturing to wipe the imaginary beads of sweat on his forehead: “Oh God. Jesus. Congratulations.”

“Thank you so much … and don’t worry!” Tovar responded, hugging Harvey as the crowd laughed.

He then went on to ask Tovar a question that must have been bugging him for so long: “Listen, I’m gonna just ask you something. How do people in Colombia feel about Steve Harvey?”

“Ain’t nobody talking to you all!” he told the taunting crowd.

Tovar replied: “You want the truth?”

Tovar responded graciously: “A lot of people hate you, but you know I love you! The most important is that … (continues in Spanish) I have forgiven you and, in the name of my country, we know that to err is human,” she said.

Harvey, who did not understand the Spanish part of her answer, joked: “Was that a death threat?”

When he moved on to the next candidate in the Top 13, it was incidentally Miss Philippines Maxine Medina.

“I can’t believe this is happening again … What the hell?” Harvey said, huffing as if he was breathless.

And when he called back Wurtzbach for her farewell walk, the exchange cracked up the crowd.

“Thank you for making me the most popular Miss Universe,” Wurtzbach told Harvey. The host’s blunder had indeed generated greater interest in the titleholder.

Harvey made a swift come back: “Thank you for making me the most popular host.”

Tourism Secretary Wanda Corazon Teo congratulated Harvey for winning the heart of the Filipinos as he tried to seek amends for his major blunder during last year’s Miss Universe competition with wit and humor.

“Steve truly has a way with words and he clearly won the heart of the Filipinos. He was apologetic but at the same time humorous,” Teo said as she took note of how the American actor-host opened the show apologetic and poking fun at himself.

She lauded the thousands of fans who watched the main competition for welcoming Harvey’s efforts to redeem himself. “The Filipino audience appreciated his humor, wit and tactfulness on stage,” she said.

“All is well that ends well. He did just great to make this Miss Universe experience truly a memorable one,” Teo said.