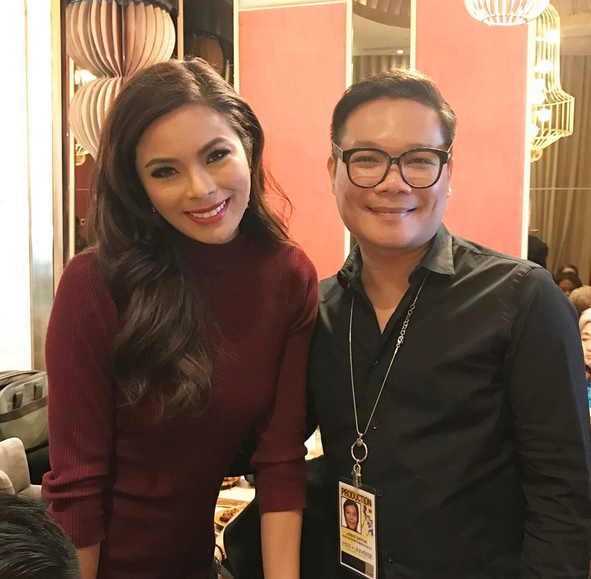 Beauty queen maker Jonas Gaffud says the pressure of hosting the Miss Universe pageant and delivering for the Filipinos was too much for Maxine Medina. SCREENGRAB FROM GAFFUD'S INSTAGRAM ACCOUNT

Beauty queen maker: Pressure too much for Maxine Medina

Beauty queen maker Jonas Gaffud on Monday night said the country’s own Maxine Medina could have fared better in the Miss Universe if the Philippines were not the hosts.

This was because Medina was put under a lot of pressure as host delegate to clinch a back to back victory for the Philippines, Gaffud told reporters at the red carpet of the afterparty in Okada Manila.

(What Maxine said after, was that if it were not held in the Philippines, maybe she could have given a better fight. She really found dealing with pressure difficult. You know the kind of pressure from Filipinos, you always have to be perfect.)

Gaffud gave this reaction after he was asked about the observation of Miss Universe 2011 Leila Lopes, who judged the coronation, that Medina lacked something which she could not pinpoint exactly.

READ: Dayanara ‘shocked’ Maxine did not make the Top 3

Gaffud brushed off some claims Medina could have fared better had she spoken in Tagalog. She answered the question and answer portion in English even though she had a standby interpreter.

The beauty queen maker said Medina had a standby interpreter to be sure she had all the options in case she feels more comfortable speaking in either language.

Gaffud said at the least, Medina did not give a wrong answer during the question and answer portion, where she was asked about a significant change in the past decade.

(When I thought about it, at least she spoke in straight English. But maybe, she did not really internalize the question.)

Gaffud said hosting the Miss Universes posed a lot of challenges for Medina, even though for him, she is one of the prettiest the Philippines has ever sent to the prestigious international beauty pageant.

“The challenges were, one to make her stand out among 86 candidates. Alam nating sobrang gaganda ngayon (We know that the candidates are very pretty). Second, to ace the question and answer. And third, to be a good host delegate,” Gaffud said.

“It’s in the Philippines, I know it’s very difficult. But it’s something we should be proud of,” he added.

Maxine made it to the top six, but fell out of the top three after the question and answer portion. IDL