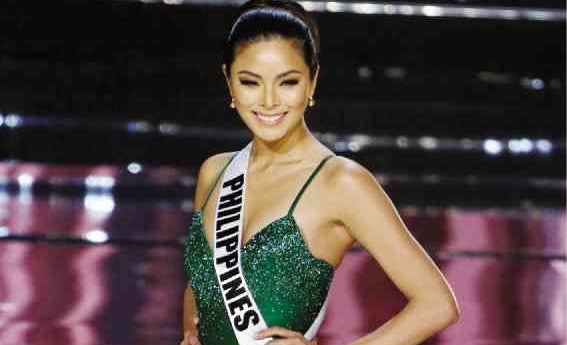 Maxine Medina’s dress designer Rhett Eala hopped on a plane to Hong Kong on the eve of the Miss Universe 2017 coronation night, dejected and hurt.

Earlier that morning, the handlers of the Philippine bet told him they decided Medina would wear a dress by another designer to the contest finals the next day.

Eala was told his dress was “bitin,” meaning, the hem was awkwardly short, or it did not have enough beadwork—Eala wasn’t sure, and he didn’t bother to ask. All he heard was, his design would not make it on coronation night.

He immediately left for Hong Kong, his mind made up not to watch the show.

“We stayed out late. I just wanted to forget,” Eala said, choking back his tears, in a phone call with Inquirer Lifestyle after Miss France was crowned the new Miss Universe. “And then I started getting calls from home. They told me Maxine wore my dress. I was so happy I was crying.”

It is without exaggeration to say that it’s a huge deal for Filipino designers to be tapped to dress the country’s bet in the Miss Universe. “Bad” dresses, often by non-Filipino designers, had been blamed for the contestants’ failure to bring home the crown in recent years—until Pia Wurtzbach, dressed by compatriots, won in 2015.

It would be a stretch to say that her Filipino-designed dresses alone clinched the crown for Wurtzbach, but local fans were proven right with her win: A Filipino designer can dress a winner. Hence, the clamor by Filipinos for local designers to dress the Philippine candidate on the global stage.

Medina, a professional model, handpicked Eala—for whom she used to walk on the runway—to dress her even in the local Binibining Pilipinas competition. After her win, it was expected Eala would also dress her for Miss Universe.

Unknown to many, Medina also approached another designer, Cherry Veric, last December to design dresses for her, for the preliminary judging.

Veric, a relatively new name with a keen eye for elaborate showstoppers, counts society women Tessa Valdes and Crickette Tantoco among his clients. He made two for Medina, a white number, and a slinky, fully sequined ruby red lace, which she wore to dress rehearsals Sunday. It was the dress Medina’s handlers said she would wear to the finals.

“They told me yesterday (Saturday), but I’m still very nervous. They could still change their mind,” Veric told Lifestyle Sunday night. “I don’t want to get my hopes up again. I made Maxine’s red dress thinking it would be worn at the preliminaries. And then she went for Rhett’s emerald dress. I thought, it’s happening again.” 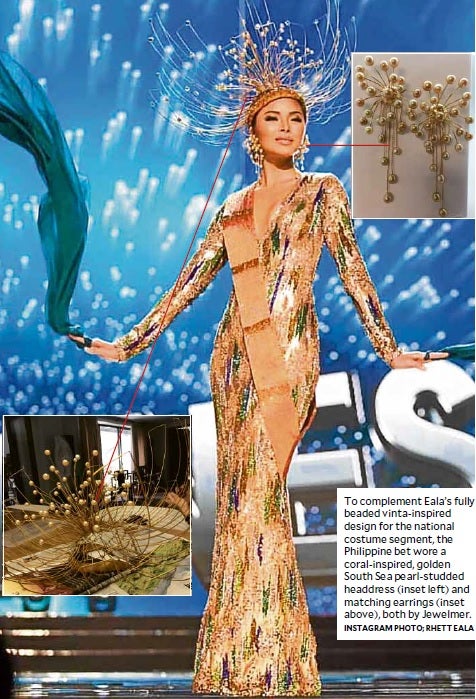 This wasn’t the first time Veric made a dress for an international beauty contest. Last year, handlers of a popular contestant went to him for a dress to be worn in the local tilt. She didn’t wear it, but they told Veric she’d wear it instead to the international level. She didn’t.

“I don’t want to expect because I feel like I’m setting myself up for another heartache,” Veric said. “If Maxine chooses my dress, I’d be honored. That in itself would be an achievement as a designer.”

“I know what it feels like, so I really feel for Cherry, too,” Eala said.

Both designers knew they were at the mercy of the candidate’s handlers, and they were given no guarantees. Still, the prospect of their hard work being rendered useless was dispiriting.

Eala and Veric weren’t paid for their services. Expenses for the dresses were from their own pockets. “We’re doing this just for the love of country,” Eala said.

“And then it’s hurtful and scary that there are fanatics who take you to task even after all the hard work,” he added.

Eala had switched his social media to private mode after getting cursed by fans who were none too pleased with Medina’s emerald fringed dress at the preliminaries. “I couldn’t handle it.”

Eala had made 10 dresses for Medina, including her national costume. All were worn save for one, a long-sleeved emerald number also intended for the finals.

His swingy emerald fringed dress and the fully beaded vinta-inspired national costume helped the Filipina clinch a spot in the top six.

“I realized I could help her only up to that point,” Eala said. “After the top six, it was all up to her. She did her best.”

The national costume’s gold palette was based on Charlene Gonzales’ own in the Miss Universe 1994, according to Eala.

Apart from the colorful boats of Muslim Mindanao, corals and South Sea pearls also inspired the look, thus Medina’s golden headdress embellished with 66 golden South Sea pearls by Jewelmer, the jeweler that specializes in the Philippines’ so-called national gem. The headpiece’s estimated cost is said to top P1 million. (Jewelmer is not stating the value.)

Her matching chandelier earrings had a total of 58 golden South Sea pearls, also by Jewelmer.

Medina’s coronation night dress had a soft serpentine skirt of red gazar that emphasized her lithe form. The deep-V bustier top with spaghetti straps was covered in Swarovski crystals, a smattering of which was also sewn onto the bodice.

It took Eala three months to work on Medina’s wardrobe with the help of designer friends Patrice Diaz and Joey Samson. Compared to working on a runway collection, designing for a beauty queen required a shift in mind-set for this designer—everything had to be cut close to the body.

Medina’s red Veric dress was sequined from top to bottom and took three weeks to complete. The shimmery number had a faux halter neckline with keyhole detail. The dress, cut low on the back, was inspired by the one Veric made for Crickette Tantoco, which she wore to Tessa Valdes’ wedding anniversary.

The beauty queen chose red. It was in the Veric dress that her team shot Medina for promotional photos. But it didn’t make it on finals night.

It remains to be seen if Veric would want to make another beauty queen dress, gratis, after this new heartbreak and drama. But if his words on pre-finals night were any indication, who knows, he just might want to give it another shot.

“Just to be considered from among so many is an honor,” he said.