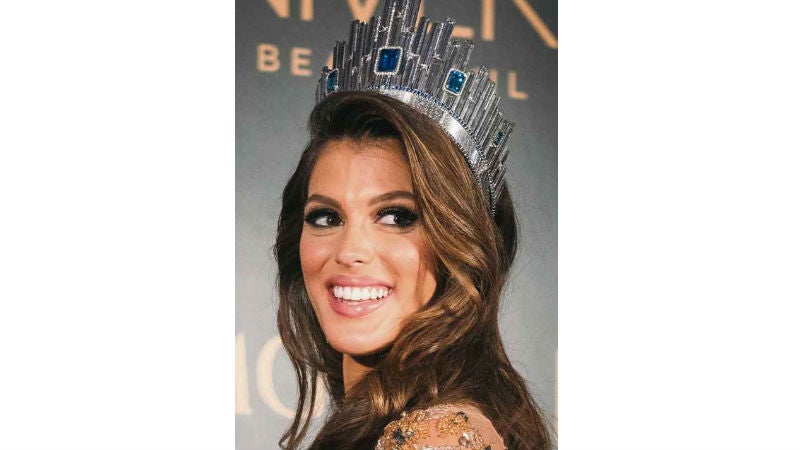 The 23-year-old French beauty told reporters after her coronation at the SM Mall of Asia Arena that fighting for healthy teeth would be her advocacy as the 65th Miss Universe.

She said she looks forward to starting her charity on dental health, especially since she is pursuing a dental surgery degree herself.

Mittenaere was a head-turner in a sequined mint green gown during the red carpet of the after-party at Okada Manila on Monday night.

What was the first thing she did after winning the crown?

“The first thing that I did really was kiss my mom. And the second thing I really want to do is to explain my charity,” said Mittenaere, who is also fond of extreme sports, traveling and cooking French dishes.

She said dental health needs more attention, even in her country, which is why she wants to pursue a career in dentistry.

“I really want to help children and adults. This is a problem I know very well,” she said.

During the pageant’s question-and-answer portion, Mittenaere was asked which failure she experienced made a mark in her life and how she learned from it.

Mittenaere replied that she had her failures pursuing her studies in medicine, but she has learned to keep trying and keep going.

“I failed several times in my life … When you fail you have to be elevated and you have to keep going,” Mittenaere said in French, translated by an interpreter.

“If tonight I will not be the winner, I am still honored that I’m still one of the three finalists. For me this is a great opportunity,” Mittenaere said.

She said she is looking forward to spending her first time in New York this Wednesday as Miss Universe.

“I think it’s really cold, so I take my coat with me,” she said, laughing.

The new queen said she is most excited about going back to France and showing off her new crown.

“I hope I will come back to France. I really want to show this crown to the French people,” said Mittenaere.

During the press conference after the coronation, Mittenaere said she hopes her win would make more French and Europeans interested in the international beauty pageant.

Mittenaere said she is proud to bring home the crown not just for France but for the European continent as well.

“I’m very proud to bring this crown in Europe … Maybe now, Europe will have a lot of Miss Universe,” she said.

Raquel Pelissier of Haiti was named first runnerup in the international pageant, with Colombian Andrea Tovar as second runnerup.