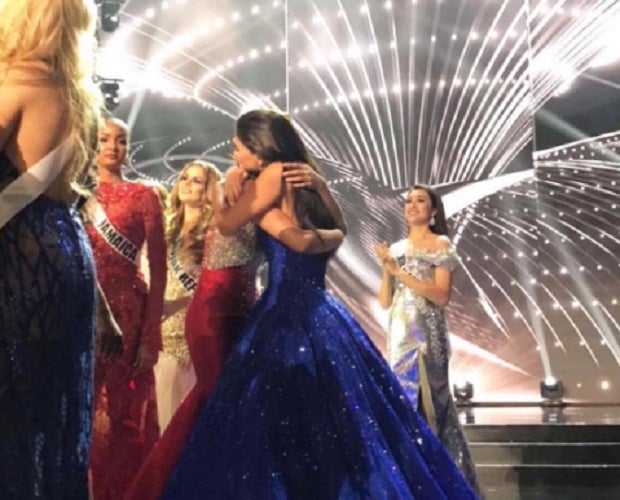 She was the very first friend who congratulated me for giving a good fight before I went out of the stage. Thank you @piawurtzbach for guiding me until the very end. No matter how far have you gone, no matter how accomplished you have become, you never forget to be a friend until the last minute of my journey. #missuniverse2016 #missUniverse credits to Richard Juan who took this photo.

Miss Universe Philippines 2016 Maxine Medina has nothing but gratitude for her friend, former Miss Universe Pia Alonzo Wurtzbach, who she said supported her “until the last minute of my journey.”

“She was the very first friend who congratulated me for giving a good fight before I went out of the stage. Thank you @piawurtzbach for guiding me until the very end,” Medina wrote in an Instagram post.

Medina posted the now viral photo of her and Wurtzbach hugging each other on stage after the Miss Universe pageant at the Mall of Asia Arena (MOA). The Philippine bet finished in the Top 6 of the competition, bowing out after the question and answer portion.

“No matter how far have you gone, no matter how accomplished you have become, you never [forgot] to be a friend until the last minute of my journey,” Medina added.

In a previous post, Medina said she was “at peace and comforted knowing that the entire country believes in me,” despite criticisms against her answer in the final question round.

“I gave and offered my best, my heart and my soul as I stepped out on the stage to represent the entire nation at this year’s Miss Universe pageant! I am so proud to have been given the opportunity of wearing the Philippine sash for a month of hosting this historical event,” Medina said. “When I was called to be part of the top 6 finalists, I knew that I could make it because I believe in myself. I KNOW THAT I AM CAPABLE AND I ROSE FROM THE CHALLENGES that I’ve been through.”

READ: Maxine Medina says she’s at peace: ‘I rose from the challenge’

In the question and answer round, Medina was asked by host Steve Harvey about the most significant change she had seen in the world in the past ten years, to which she answered: In the last 10 years of being here in the world, I saw that all the people bring in one event like this Miss Universe. And it’s something big to us, that we are one as one nation, that we are all together.”

Iris Mittenaere of France was eventually crowned by Wurtzbach as new Miss Universe, with the representatives of Haiti and Colombia as first and second runners-up, respectively. YG/CDG