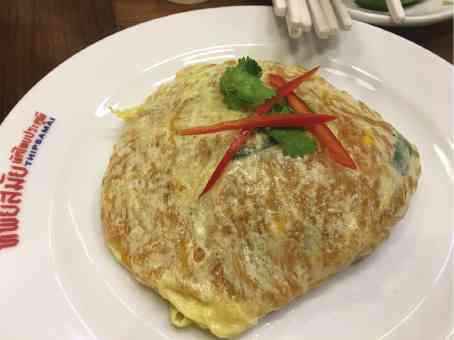 Sometime in the late 1980s, I was invited to a restaurant called Flavors and Spices. Sampling green mango salad was love at first bite. It started my love affair with Thai food.

Previously, my only experience was the pad Thai I tried at a restaurant called Nit Noi in Angeles City, Pampanga.

A decade later, my mom opened a Thai restaurant, Mai Thai, with her partner Sylvia Lim. We had three Thai chefs who created a buzz in the Edsa Central area.

Inspired, I put up fast food branches of Mai Thai in a few malls. I would often travel to Bangkok to buy ingredients and see the authentic way of preparing Thai dishes.

I would always have street food or go wherever I felt hunger pangs. Turned out that I wasn’t really experiencing the best of what Bangkok offered. So, I started getting tips from friends. Now I dine only in recommended places around that city.

Recently I was in Bangkok with my badminton group from Valle Verde Country Club. We were 16 and it was quite difficult to gather everyone, given our different wants or cravings. So I enumerated the most recommended places.

Our first meal together was in a place called Soi Polo that serves authentic, reasonably priced Thai food. We had exceptional, bouncy fish cakes.

That evening, I went to Thipsamai, an old restaurant that serves only the legendary noodle dish pad Thai. This was the most delicious version I have ever tried.

The noodles were wrapped in a thin layer of scrambled egg with bean sprouts and spring onions on the side. It was mildly sweet, salty, sour and spicy if you wish. With a little lime juice, it was a dish I had only dreamed about.

It was so good, we went back two nights later.

For lunch the next day, we ate at Go-Ang Kaomunkai Pratunam, a restaurant specializing in white chicken. That was all it served with chicken-flavored rice.

There was a line but the wait was not too long.

We did this almost every night.

Once we had lunch at the Or Tor Kor market. We bought from a variety of stalls selling dishes such as spicy green papaya salad, tender asado pata with hard-boiled egg, chicken sate, roast pork with spicy wansoy sauce, Thai grilled chicken, oyster cake or anything our eyes and hungry tummies lured us to try.

Prices were so reasonable, you could try anything.

Dessert was the Tap Tim Crob and smelly but delicious durian.

One dinner we had was at a restaurant that specializes in crab omelet. Here, you would find an old lady in flying goggles manning the wok. She meticulously fried and formed that round elongated specialty.

The result was a subtle tasting crab specialty you would not find anywhere else in Bangkok.

I also saw a crab curry dish which I will go back for. The dish was very good but not filling. And because it was literally right beside Thipsamai, we lined up again to have the delicious pad Thai.

Never make the mistake of ordering pad Thai to-go. It was far from what it should taste like.

Another memorable meal was at Somboon Seafood restaurant which was recommended by a friend. It had the most delicious whole crab curry—with thick orange sauce that was mildly spicy, creamy and bursting with flavor. I love it with Thai steamed rice.

We also ordered Thai kangkong, a crispy fish with patis-lime sauce, and a chicken dish with peanuts. Grabe ang sarap!

This meal and the pad Thai were the ones that stood out among all the meals we had.

This is my new lineup of places to revisit in Bangkok. That will be soon, Lord willing, with my family. You have to experience it, too.

For those interested to join my Fukuoka/Hiroshima food tour, send me an e-mail to be forwarded to Japan Tourism Board, and they will give you more info. Cost is $1,950 inclusive of airfare, hotel, transfers and around 90 percent of meals. You won’t imagine how outstanding the food will be!