Married to sourdough deliciously ever after | Lifestyle.INQ ❮ ❯ 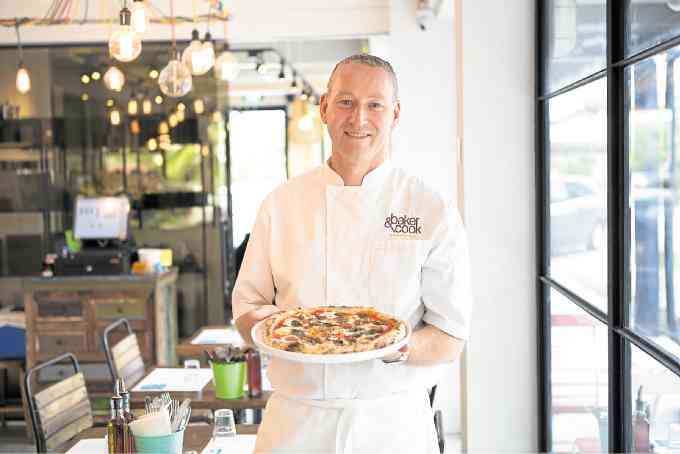 Married to sourdough deliciously ever after

Sourdough bread is a commitment. To keep the dough starter well and healthy, the baker has to feed the yeast regularly like… forever.

The charming Kiwi was recently in Manila for the opening of Baker & Cook and Plank Sourdough Pizza, twin brands he established in Singapore and which The Bistro Group has now brought to the Philippines.

“I was 16 when I made my first sourdough in New Zealand; it’s been ‘alive’ since then,” said Brettschneider. “The one we use here in the Philippines is from that first sourdough, and it’s the same sourdough I brought to China, London and Singapore.”

Traditional sourdough is naturally fermented with bacteria and wild yeast, which gives it a distinct tangy taste. Brettschneider’s sourdough loaf has a nutty crust and a moist, dense center—perfect with jam and butter.

The menu is limited but it’s a chill place for afternoon tea and good, unhurried coffee.

“We serve UCC coffee, but it’s not the beans that make a good or bad coffee—it’s the barista,” Brettschneider explained. “I spend more energy on training my baristas than looking for the best beans in the world.”

“They are all handmade. We don’t have big machines or a factory,” he explained. “The pizza crust at Plank has a nice airy texture because we hand-stretch them instead of using rolling pins that flatten the dough and knock the air out.”

Naturally, Plank makes use of Brettschneider’s trademark sourdough for the pizza crusts.

There are seven combinations of toppings. Pizza No. 1 is the simplest with just tomato, mozzarella, caramelized garlic and basil. Pizza No. 7 has tomato, pulled barbecue chicken, cranberry compote and camembert. And never reject the crisp outer crusts, there’s olive oil on the table for dipping.

Brettschneider said he had to tweak the pizza sauce for the Filipino taste. “In Singapore, we just use simple rich Italian tomatoes. Here we have an underlayer of three cheeses, and a combination of creamy white sauce with the tomato sauce to bring out more flavor.”

He also came up with Filipino staple: rice and entrées.

“We added roast chicken and barbecue ribs. You can have these with rice, roast potatoes, draft beer.” Or bread, since diners can cross order at Baker & Cook.

Brettschneider has authored or contributed articles to 12 books. He said he has been baking since he learned how to make scones as a kid from his grandmother in a farming community in New Zealand.

“I worked places, from small bakeries to an industrial bread plant. I am technically trained in the science of baking,” he shared. “I combine old school and new school. My carrot cake, for example, is a lot like my grandma’s but it looks nicer.”