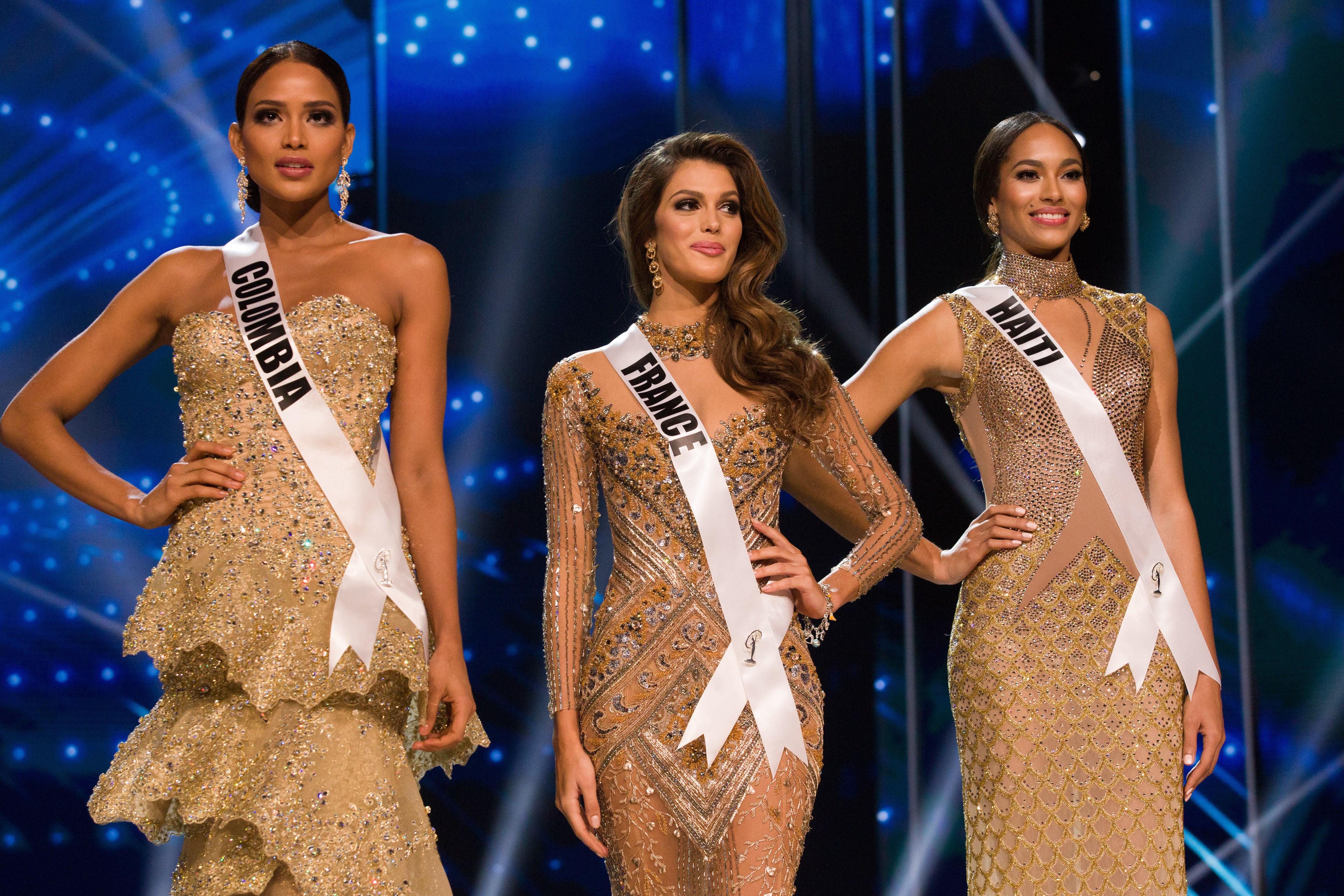 Andrea Tovar, Miss Colombia 2016; Iris Mittenaere, Miss France 2016; and Raquel Pelissier, Miss Haiti 2016; during Top 3 Final Question on stage with Host, Steve Harvey during The 65th MISS UNIVERSE® Telecast airing on FOX at 7:00 PM ET live/PT tape-delayed on Sunday, January 29 from the Mall of Asia Arena. The contestants have been touring, filming, rehearsing and preparing to compete for the Miss Universe crown in the Philippines. HO/The Miss Universe Organization

From Margie Moran to Maxine Medina: Does fashion make a difference in Miss Universe?

If the dress is beautiful, it gives you confidence. If you see the other girls in dresses you feel are more beautiful than yours, that’s when your spirit gets affected. Your morale takes a nosedive.

“So it is big deal that a beauty pageant candidate wears a dress that would not only please the judges, but would also make her feel like the queen she wants to be,” says veteran fashion designer Auggie Cordero, who dressed Margie Moran throughout her Miss Universe bid in 1973.

Designing for a beauty pageant is a different mind-set, since you’re not only trying to bring out the best in the candidate but also aiming to impress judges and pageant aficionados, he adds.

“Your audience are not fashion editors,” he says. “The mentality is different. You’re being judged not solely on the fashion merits or the technical intricacies of the design. You have to think of the lighting, the stage. These things you need to research on.”

While Miss Universe judges this year were looking for a girl who was “confident and beautiful,” “someone with grace and style,” but also “natural… real and normal,” as they said in interviews before Miss France Iris Mittenaere was crowned 65th Miss Universe, one has to remember that it’s the looks that give the first impression. It’s a beauty pageant, after all.

They don’t get to show the world their smarts that impress judges behind the scenes unless they get past the beauty round. And whatever they wear could make or break their chances to win.

In the Philippines, where a majority of the population are pageant enthusiasts and fanatics, it’s both a blessing and a curse to be tasked to dress a candidate.

“It gets you mileage, so it’s good for a designer, especially now with social media,” Cordero notes. “But if the candidate loses, an entire nation of fans will crucify you.”

Her fringed emerald dress with beaded bustier top hit the right notes, both from fashion and pageant perspectives. It wasn’t a typical pageant dress—not too flashy or overwrought—but still an eye pleaser, and also suited Medina, who’s a fashion model. It showed her poise and bearing.

Her national costume was similarly elegant and subdued, if not as dramatic and elaborate as eventual category winner, Miss Myanmar. Both Eala designs helped Medina clinch a spot in the top 13.

Fanatics, used to over-the-top gowns, however, weren’t as impressed and proceeded to attack Eala on social media, forcing the designer to set his accounts on private mode. Eala and Medina’s other designer, Cherry Veric, made her dresses gratis. Eala made her 10 dresses to choose from.

When Moran competed in 1973, Cordero was given a P2,500 budget for her entire wardrobe for the pageant in Athens—and that included his talent and professional fee of about P1,500. “Even with prices at the time, you had to use your own money,” he says.

It was the designer who groomed Moran, who was one of his models, for Binibining Pilipinas. Like Eala and queen maker Renee Salud, Cordero was the shoo-in to design the local bet’s wardrobe, which included casual wear, a travel suit, cocktail dresses, long gowns, and an evening gown for the finals. Moran was crowned in Cordero’s slinky dress with a deep-V neckline and a huge flower detail on the left shoulder. Cordero didn’t fly to Greece to watch.

“Candidates now are so lucky because they’re afforded so many costume and dress changes. In Margie’s time, balikbayan boxes were unheard of. She had to fit her entire wardrobe in three or four suitcases,” says Cordero.

The Miss Universe look has evolved through the years. It used to be all figure-hugging and over-the-top.

But, Cordero notes, the contest has also chosen queens in more high-fashion looks, as evidenced in some previous winners, like Japan’s Riyo Mori in 2007 and Russia’s Oxana Fedorova in 2002. Both women wore Gucci from the runway collection—Fedorova donned a white flowy empire-cut dress, a complete counterpoint to the typical fit-and-flare pageant dress.

It’s unclear if the new Miss Universe management had anything to do with the shift in evening wear fashion this year, but last Monday’s finalists were mostly in Hollywood red-carpet-worthy, more high fashion dresses on finals night. (IMG, a talent management behemoth, which now owns Miss Universe, has a fashion arm in IMG Models.)

In an interview with Yahoo, Miss Universe Organization stylist Marquis Bias said: “Of course there are still girls who are tried-and-true pageant girls, and their gowns are very of that inspiration. But I feel that a lot of the girls who are more successful in the evening gown competition are girls who choose gowns that could easily be seen on any red carpet.”

Mittenaere was crowned in a nude stretch tulle dress that was strategically beaded in silver and champagne crystals, reportedly by a Vietnamese designer.

Her runner-up, the 6-ft-tall Raquel Pelissier of Haiti, wore a gown in an almost similar treatment and color. Ditto for the Colombian second runner-up, Andrea Tovar, in a champagne strapless number with stiffened tiered skirt by her compatriot, Alfredo Barraza, who has also dressed previous Philippine bets.

Medina’s coronation night dress, a fit-and-flare number by Eala, hewed more to the pageant stereotype than the emerald dress did at the preliminaries.

The alternative, a shimmery red lace by Veric, was also of the same silhouette, and widely pleased fanatics when she wore it to the pre-pageant rehearsals on the eve of the finals. (See related story on lifestyle.inquirer.net: “Rhett Eala or Cherry Veric for Maxine? Last-minute suspense in Miss Universe.”)

Four decades ago, the politics behind the candidate’s dress wasn’t as toxic as it seems now, Cordero says.

The organizers merely told the designer what color or theme they were going for. The candidate, in turn, worked only with one designer, the one who groomed her. 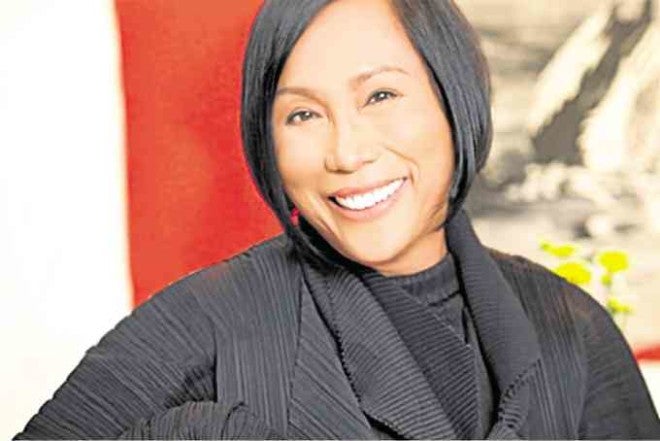 “Look at Renee (Salud), he has a retinue of loyal girls,” he adds. “All the queens he made, they stood by him. It’s called decency.”

Well, that subject in itself is an entirely different story. 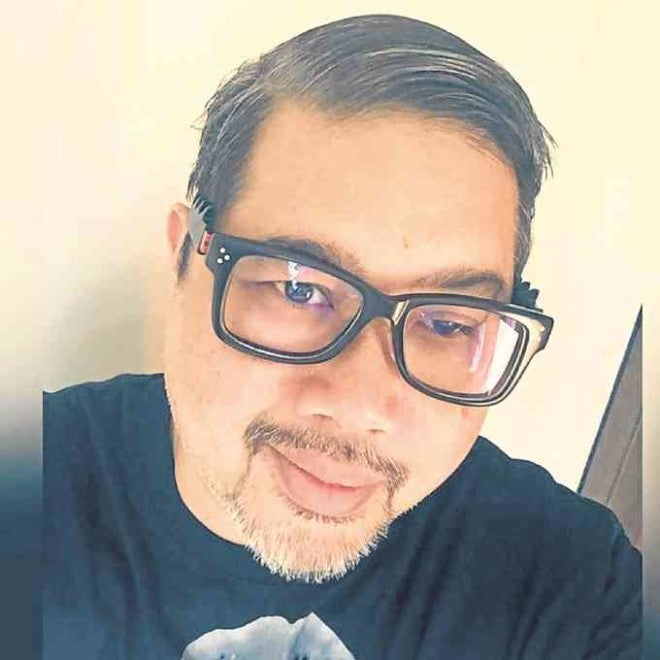