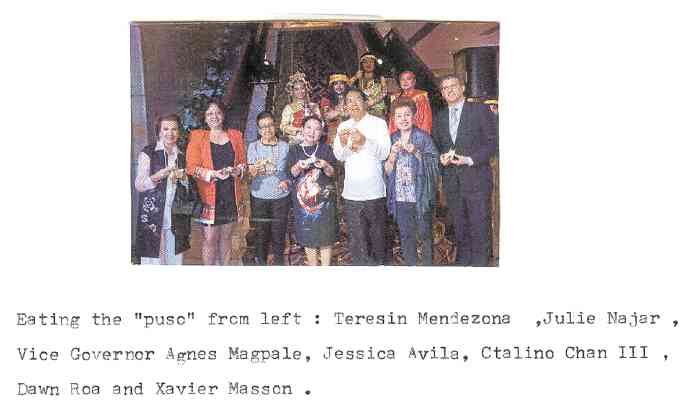 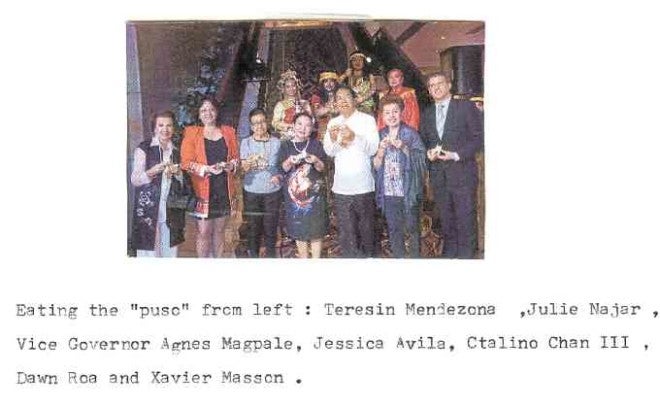 The Consul General of the People’s Republic of China Shi Yong hosted a formal reception on the occasion of the Chinese New Year at the grand ballroom of the Marco Polo Plaza Cebu.

It was attended by a cross section of Cebu’s business community: among them, former Philippine Ambassador to China Francisco Benedicto, his brother Enrique Benedicto (who is Honorary Consul of Belgium); Joseph Gaisano; and Augusto Go, president of the University of Cebu.

In his speech, Consul General Shi Yong spoke about the ever increasing number of tourists coming from China to the Philippines, most especially to Cebu. The figure is expected to go even higher this year, with the addition of more flights from China to Cebu.

The Marco Polo itself had a grand celebration of the Chinese New Year on the evening of Jan. 27. There were dragon and lion dances all over the lobby, plus the catching of a giant crab after 35 exciting minutes.

The crab’s claws were tied securely before it was handed over to GM Julie to cradle. “That means she accepts the challenges of the Year of the Rooster,” explained director for sales and marketing Lara Scarrow, as communications manager Manna Alcaraz, and revenue manager Jude Pangan looked on.

They were special guests at a lauriat dinner served at the private room of the Café Marco. Also present were US Consular Agent Glenn Loop and his wife Honey, Bobit and Jessica Avila with daughter Katrina, Dr. Nestor Alonso, GMA’s Ann Marie Tan with daughter Samantha, and newshens Flor Ynclino, Chinggay Utzurrum and Cookie Newman.

Next morning at 10:30, guests gathered at the lobby of the Shangri-La Mactan for fireworks, dragon and lion dances, and the yee sang salad tossing. There was enough of it to serve the many who had gathered to witness the rites.

Festivities were followed by a delicious lauriat at the Tea of Spring, the resort’s Chinese specialty restaurant.

The recent feast day of the Santo Niño de Cebu was celebrated with the usual devotion and fanfare. Despite weather concerns, the fluvial procession pushed through without a hitch on the morning of Jan. 14, from the Ouano family wharf fronting Mactan Island. Hundreds of devotees awaited at Pier 1 in Cebu City.

More devotees got ready for the foot procession scheduled at 1 p.m., and winding its way through Osmeña Boulevard, Mango Avenue, and MJ Cuenco and back to the Basilica del Santo Niño.

Guests who attended the traditional lunch at the home of Jose Mari and Happy (née Ouano) Miranda were at the venue early, before the streets were closed to traffic.

It was quite a gathering of kith and kin. “Except for the lechon, everything else is home-made,” said daughter Merche Miranda. There was caldereta, callos, fish fillets, large prawns from the family fish pond, and luscious sprigs of grape-like seaweed, also from the Miranda farm in Bogo/Medellin in North Cebu.

Part of the Santo Niño festivities at the Marco Polo Plaza Hotel was the “Sugbusog,” the Cebuano food fest held every January. On opening day the first ritual was Msgr. Roberto Alesna’s blessing of a Santo Niño exhibit at the hotel lobby.

According to GM Julie Najar, this was the 10th year in a row that the “Sugbusog” was sold out for lunch and dinner during its 10-day duration. Jessica Avila has been the festival’s culinary consultant for all these years.

A dance drama depicting the coming of the Santo Niño to Cebu in 1521 was presented by Val Sandiego’s Dance Company. The choreography was elaborate and the costumes more than lavish.

Before filing in to partake of Cebu cuisine at Café Marco, there was one more ritual to observe. Instead of a ribbon to cut there was pusô, rice cooked in a coconut palm basket, sliced open and duly tasted.