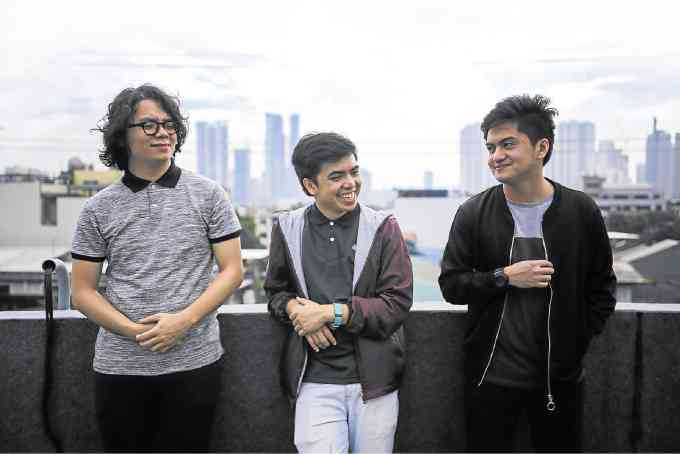 The story behind Tom’s story

No words are needed to weave a narrative. Guitar riffs and punctuating basslines can sail its listeners through a whirlwind of energy and emotion. This is exactly what the music of Tom’s Story proves: Instruments of equal weight, producing a smooth dynamic and youthful vibe can get people hooked.

It didn’t even take long to get the crowds to listen to their music. Night after night their spectators’ numbers swelled, with mimicked notes rolling off their tongues.

The band began to regularly open shows, measly 15-minute affairs with the spotlight. Eventually their sets became longer, until they were popular enough to become one of the main acts.

The trio of Gabba Santiago, Tom Naval and Christer “Degs” de Guia, playing around with the post-rock and math-rock genre, had unsurprisingly grown to be one of the most sought after acts in the local gig circuit today.

We saw their name get even bigger and bolder on the posters of various indie shows. This March, Tom’s Story will be playing in the largest homegrown music festival Wanderland.

Their music grows on you—if it doesn’t grow with you. The magic and beauty of their compositions lie in its ability to diversify its message.

It holds nothing sacred—there are unexpected shifts of pace, with refreshing thrills of imaginative melody. What they have created is both an explosion and fusion of uniquely pensive drives.

It’s been exactly a year since Tom’s Story’s self-titled album has been released, but the band is taking its time before it produces a new one. Super sat down with Tom’s Story and asked about the inspirations and quirky stories behind their songs:

Anchors. Written in their sophomore year in college, “Anchors” was said to be the track that established the sonic identity of the band. “Even if some of our songs now pre-date ‘Anchors,’ when we played that it was the one that made us go, ‘F*ck, eto na.’ If not ‘Mugatu,’ it’s the song that makes people identify us as Tom’s Story,” Tom said.

Dream and Catcher. The next two songs are composed as sequels to “Anchors.” The band shared that these had the initial code names of “Pan,” and “Cake,” at the time of the recording. “We thought we wanted a bridge to connect the two songs. Eventually I had to go back and record ‘Dream’—our only ‘studio song,’” Gabba added.

Vivir. “It’s a bit different, a bit darker than our other songs,” Tom said. The song was also revealed to be the most difficult to play, so fans don’t often get to hear it during the band’s live shows. “I hate playing it,” Gabba admitted.

Light and House. Similar to “Dream” and “Catcher,” these songs complete the second of five parts of the 10-track album. “Light” was planned to be an acoustic track described to be a “breather.” On the album, it was solely orchestrated by Gabba and everything was experimented with on the spot. “It’s about longing,” Gabba revealed.

VL Raza. “We got the name from wrestling,” Degs shared. “It’s my favorite one to play,” he added. The band said the track had evolved the most from its initial sound. “That’s what makes it special too, since it’s been with us for so long. We had to change it and eventually and we found ways to make it work,” Tom said.

Seyda Neen. “I was just thinking of an old game, ‘Morrowind.’ Seyda Neen was the name of the first town there,” Tom said. Like the game, Degs described the composition like a hero’s journey. The band said its unique parts put into play a classic literary plot defined by wonder, joy and nostalgia. “It has the most parts, nothing is repeated. It doesn’t have a hook or chorus—it’s my favorite to play,” Tom revealed.

Feathers. “The track is bittersweet, it’s about coming into terms, acceptance,” Gabba said. “It’s my favorite to play,” the guitarist shared. “It has the fastest melody, too,” Degs pointed out. “We used a looper for the first time to add in elements and different layers,” he added.

Mugatu. The oldest song in the album is always the last one to be played in their set. “It’s our favorite to play as a band,” Gabba said. “There’s a heavier buildup and slow ambience and dynamic—this was the start, this was what kicked it off, it’s the first milestone of the Tom’s Story you know now,” Tom added.

Homestuck. For one of their newest songs, a fan took the liberty to name it and the band might actually stick to it. “That’s what we call it now. There’s a story behind it, I read in a comment. His girl wasn’t able to go to that gig, she was stuck at home,” Gabba shared.

The trio admits that the rest of their ongoing journey seems surreal, much like the sound they create, as they now find themselves playing alongside names that they’ve once hailed as their heroes. They delight live gigs with two fresh melodies, but we are still left to wonder about the stories they have yet to tell.