From Mick Jagger to Manila House: Just what is that Gert Voorjans experience | Lifestyle.INQ ❮ ❯ 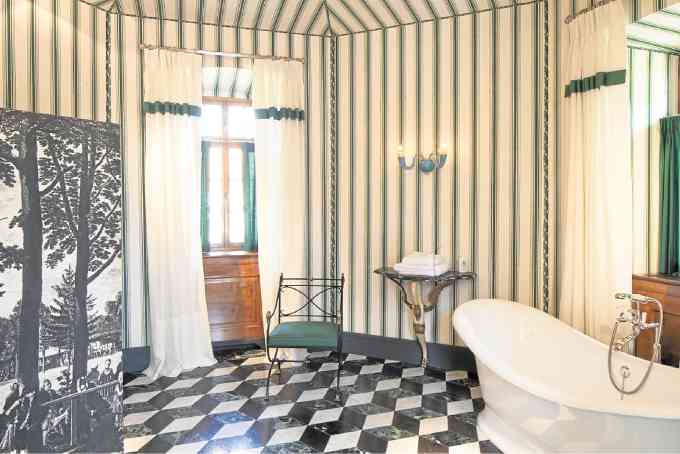 The Victorian tub looks modern in a setting of optical flooring and hand-blocked stripes that extend to the pitch ceiling. PHOTOS BY NELSON MATAWARAN

From Mick Jagger to Manila House: Just what is that Gert Voorjans experience

Not many designers can pull off eclecticism, a look that harmoniously combines disparate elements. Belgian style maverick Gert Voorjans (pronounced “vooryans”) does so with flair. Interestingly, his OOTDs serve as calling card for his interior design style.

In a recent interview with Inquirer Lifestyle, he wore a double-breasted suit by his long-time client, designer Dries Van Noten. The dramatic tones of the midnight blue-and- bronze suit with chinoiserie peacock images was a contrast to the crispness of the blue-and-white gingham checked shirt.

Voorjans said he liked to set off his traditional clothes with a graphic accessory like a midnight blue-and-white striped bowtie and full brogue oxfords.

Leaving his bone-framed glasses behind, he picked up black rectangular synthetic frames in the New York airport. The glasses toned down the dandy dressing and gave him a corporate air.

“Not everything has to be in tortoise shell,” said the 54-year-old designer. “I like beautiful materials that age very well—wood and stone. I come out of that zone of too much beige, gray, I like character pieces. I love Italy for its marble.”

Voorjans has been visiting the Philippines to create the look of Manila House, a private members’ club on the top floor of Net Park, Bonifacio Global City. The 5,000-sq m lifestyle property is undergoing finishing touches.

Still, his coffee-table book, “Daily Life,” was launched there last December, right after this interview.

“Daily Life” features 10 residential projects that range from a country house to a city flat. The projects reflect the influences of Voorjan’s formal training.

The Institute of Architecture in Hasselt, Belgium, honed his aesthetic—particularly his design of a building façade and its skeleton.

His study of Italian Renaissance history cultivated a deeper appreciation of antiques and classical design elements. His research would later shape his judicious selection of room accessories.

Voorjans worked for antiques collector and decorator Axel Vervoordt who helped further refine his taste and showed him how to deal with upscale clients.

In 1995, Van Noten, a fellow Belgian, asked Voorjans to design his flagship stores and in-store boutiques. Back then, minimalism was the vogue, set by Calvin Klein. Voorjans went against the trend and created an eclectic and homey ambience that gave one a sense of place.

“Other shops introduced the minimalist white box to focus on the clothing. All the stores became streamlined and clean,” said Voorjans. “I put together objects, sofas, lampshades and curtains. They became living spaces. The Parisian store looks like a Parisian apartment. You could close the curtains and live in it. The New York store looks like an apartment on Madison Avenue.”

To get a wider range of projects, Voorjans set up his eponymous studio in Belgium in 1997 with Van Noten as prime client.

Working with rock icon Mick Jagger was a dream project. The Rolling Stones frontman showed Voorjans his houses around the world to get a sense of the rock legend’s personality.

The project was part of a historic building along the Thames in London, once served as the palace of Henry VIII.

“He has a well-cultivated taste,” Voorjans said of Jagger. “He likes traditional furniture. He knows about William and Mary (early Baroque furniture) and has an extensive painting collection of over 3,000 pieces.

“This is entirely different from working for people with nothing, and I have to find a painting to put above the sofa. He owns 160 artworks of himself by Andy Warhol. I could have cluttered the staircase with those paintings, but he’s reserved. You don’t want to put them on the faces of the visitors.”

Jagger’s house is not included in “Daily Life,” though Voorjans explained that the book provides design solutions that reflect the owner’s personality and their environment. “When I work with clients, they have to be involved,” he said.

Voorjans’ style is influenced by historical personalities. He picked up scale and proportion from Italian classical architect Andrea Palladio; the sense of perspective and layering of space from English architect Sir John Sloane; and the drama and panache for combining contrasting styles from 20th-century designer Renzo Mongiardino.

“Daily Life” shows parts of the house with character and individuality. “Most interior design books are artificial. It’s about this sofa or a setting which you either like or dislike. To appreciate space, you have to see it in its context,’ Voorjans explained.

Live in a house

The book cover features a corner of the library in his house. A bold fuchsia chair pops out in a subdued setting of open shelves of books and objects.

“The shelf displays a collection of pieces that don’t necessarily have value,” he said. “Not everything has to be linked with money. ‘Daily Life’ shows how you live in a house. Come out with the coffee or tea and a little cake, and show a little attention. We are slowly losing hospitality which is more important than wonderful décor. When interior design is linked with what I can buy, the place becomes a showroom.”

The designer walks his talk as seen in these pages. A former consulate in Antwerp maintains the feeling of an 18th-century French chateau. The living room picks up its color theme from an 18th-century Aubusson, an ornate tapestry weave rug with nature patterns.

The green, antique-pattern silk damask wallpaper is complemented by an ottoman and armchair in mandarin or tangerine (“It’s more sophisticated than orange,” he noted). The silk velvet Italian Venetian sofas pick up the sheen of the silver gray paneling.

As a modern twist, the main painting is abstraction by American artist Sterling Ruby.

“I don’t want a historical room or show off my taste,” said Voorjans. “I make rooms for people who live today. Objects of history are for inspiration but you need something contemporary for sharp contrast.”

To liven up a schloss in Bavaria, Germany, the foyer is furnished with organic elements such as an armchair with deer antler frames and a rock table with a glass top. The hardness of the pieces is softened with a red sofa with soft upholstery.

Since the client’s son studied Mandarin in Shanghai and collected mushrooms, Voorjans displayed mushroom dummies on an antique Chinese cabinet right beside a stool with reindeer horns. The designer explained that these horns were typical of Bavaria.

On his penchant for antiques and retro pieces, he explained: “I want to transpose old pieces and give them a new life. They are like ambassadors. I find more satisfaction and creativity in looking for them than going to a Milano fair and seeing uniformly newly made products.”

Home away from home

For Manila House, Voorjans considers the building architecture and the place. “It’s new, so you could be freer,” he said.

“I always say my slogan is ‘color, character and craftsmanship.’ This is what Manila House aims to show. It will be a home away from home. There are some furniture from the ’50s that are lacquered in bright color. The look has to be something joyful. I like that there is humor.

“Some interiors are deadly serious. In this club, you can afford to do something a bit crazy. My approach is that not everything has to match or be in off-white or cream,” explained Voorjans.

The designer praised the raw materials such as abaca, coco lumber and exotic woods.

“The craftsmen are loyal to the raw material,” he noted. “Their products are not over designed. The next step is to bring the raw materials up a higher level that is more cosmopolitan and global.” —CONTRIBUTED

What is Manila House?

Manila House is a private club that welcomes people from diverse backgrounds. It provides convivial spaces where people can network and build ties.

Membership is by invitation, upon the recommendation of two members. The fee is rounded to six figures.

Unlike other members-only club whose clientele is exclusive to the affluent or prominent, Manila House invites people across social classes and from various fields.

In the pipeline are events covering film, cuisine, politics, business, music, wellness and science organized with such partners as the Metropolitan Museum of Art in Manila, Asia Society and Cinemalaya.

Bonifacio Lounge and Dining—an all-day lounge with adjacent dining room, featuring comfort food and classics with the chef’s own take, such as the Manila House Burger or Boneless Chicken Quarters served with mash and corn on the cob, and the Caesar’s Salad prepared right by the guest’s table.

Avenue Bar & Deck— the bar spills out onto an al fresco deck, serving refreshing and creative cocktails, and bar chow like truffled popcorn and chicken wings.

The Grill—A steak and seafood place

Since its soft opening, Manila House has been frequented by prominent names in business, media, society and the arts, millennials and expatriates who do lunch, hold business meetings or just chill.