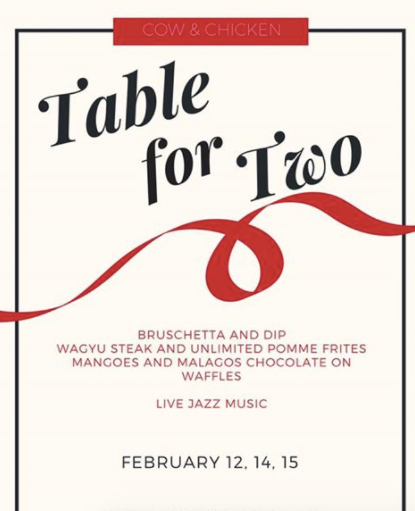 “Third-wheeling” on Valentine’s Day is never fun, but for a limited time offer, it could actually score you a free meal.

Crashing a romantic date between your two favorite couple-friends does not seem like a bad idea after all, as one restaurant inside the food haven of Kapitolyo, Pasig is offering a free meal for a friend who’ll be tagging along a couple’s romantic evening.

As the calendar shifts to the love month of February, the restaurant Cow & Chicken Modern Brunch Dining is supporting this unlikely three-way by giving away a free steak dinner to one couple’s single friend.

As posted in the restaurant’s official Facebook page last Friday, lovers are invited for a three-course meal consisting of bruschetta and dip for appetizers, wagyu steak and unlimited pomme frites (french fries) for the main course. For dessert, there’s delectable mangoes and Malagos Chocolate on waffles for dessert. All these for only P599 per head.

But in a somehow peculiar twist of things, one lucky friend could avail the same menu—completely free of charge.

The almost too-good-to-be-true deal, however, will only support one “forever alone” friend and could only be availed one time.

Some love for the third wheel

According to the restaurant’s co-owner Samantha Beltran, the idea of offering the free dinner to a third wheel came as some sort of accident. She and the team were thinking of what they could do for Valentine’s Day and came up with the phrase “table for two.” Then they found themselves suddenly confronted with a question: “What about the ‘third wheels’ in relationships?”

“It was a funny idea at first, then we decided to put it in last minute, like giving these third wheels some sort of consolation, by giving their meal for free while their friends enjoy a romantic moment.” said Beltran. “We thought our friends would find it funny, we didn’t expect for it to have such an enormous response.”

“I think it’s because it’s a humorous thing that does happen in real life, that third wheels do happen and that we have at one point become third wheels to our friends and relatives, that’s why people related to it,” explained Beltran. “Our idea was that we wanted to create something special for couples while making them (the third wheels) feel comfortable enough to be themselves.”