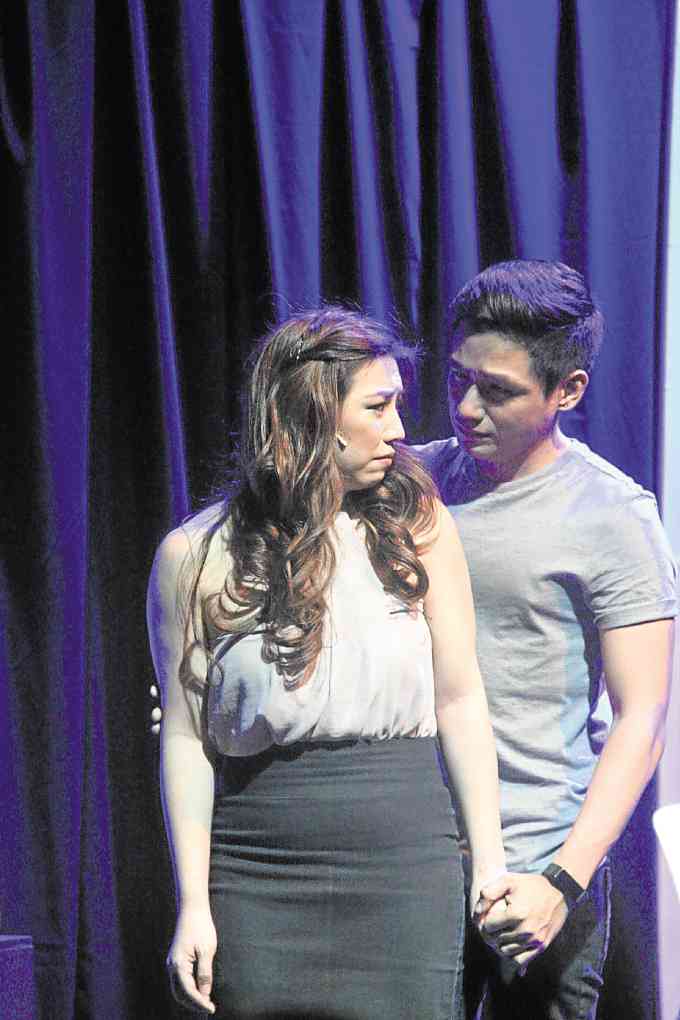 It’s definitely a hit if there’s even a Facebook page pleading for your show’s return.

Nearly four years later, “Sa Wakas,” the jukebox musical that spins a love triangle around the songs of defunct rock band Sugarfree, is back. And the beauty of time is that it brings perspective.

“Sa Wakas” of 2013 was a beautiful surprise, not only for the effectiveness of its inverted-time structure, but also for its clear-eyed and lived-in depiction of middle-class millennial life in Manila. It captured not just a youthful belief in dreams and possibility, but also the gritty push-and-pull of romantic entanglements.

This time, Andrei Pamintuan still directs. Ejay Yatco, whose revitalizing rearrangements of the Sugarfree songbook are one of the best things about this musical, now helms a seven-piece band. The design elements more or less retain the original look.

But Pamintuan has admittedly tinkered with and expanded the original script. If anything, this “Sa Wakas” now feels uncomfortably long (three hours with intermission).

Edited lines such as “Wala nang James Reid sa iyong Nadine” in the song “Wala” serve their purpose in updating the play’s milieu, but the bigger picture is now a wordier one. More talk may mean more complex, fleshed-out characters, but it also runs the risk of these people falling into stereotype.

The truth is, the success of each performance of “Sa Wakas” is heavily dependent on the combination of actors one gets to see.

Robinson and Borromeo, for example, are an ideal match. Their equally self-possessed takes on their characters make for a level playing field, and when they engage in the modern-day game of love and loss, the stakes feel so much higher and more exciting to witness.

Robinson’s singing voice remains a wonder, while Borromeo is a perfect fit for this pragmatic, Philistine-doctor-with-a-heart version of Lexi. Their portrayals make you understand how they could have fallen for each other, how they could feed off each other’s energies, and how their love could eventually go up in flames.

Herrera provides a more grounded approach to Topper, and his particular brand of self-deprecating humor opens more emotional channels for the character. But pairing him with Barredo makes you question how Topper and Gabbi could have even worked in the first place.

Barredo’s take on Lexi is more cute and charming than confident, which doesn’t do anything to make her believable as a neurosurgeon. Paired with Herrera, the battle is just about lost from the start: There’s no way the passionate, strong-willed Topper could not have overwhelmed this rather simplistic Lexi. You see why he would actually tire of her and set his gaze elsewhere.

It’s also worth noting that Herrera looks absolutely nothing like Hans Dimayuga, who plays Topper’s brother. With Robinson in the lead, the number “Dear Kuya” not only becomes a thrilling vocal showdown between brothers, but also a case of convincing casting.

Cruz and Peña, both tracing their roots back to Ateneo Blue Repertory, each elegantly fills the part of the self-assured, liberated Gabbi (though Peña’s weaker singing voice falls victim to the atrocious sound design plaguing this production at the Power Mac Center Spotlight Theater).

The perfect trio of actors can summon the very qualities that made audiences fall in love with “Sa Wakas” back then. Absent that, this musical can end up evoking the treacly “kabit” movie or teleserye one of its characters scoffs at.  —CONTRIBUTED

[Correction: An earlier version of this story mentioned that “writers Pamintuan and Ina Abuan have admittedly tinkered with and expanded the original script.” Only Pamintuan worked on the revised script; this version reflects that update.]