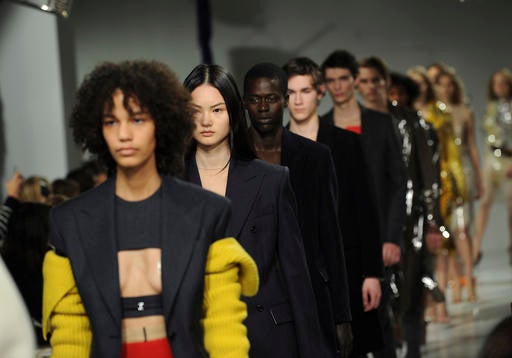 NEW YORK—Raf Simons, considered one of the finest designers of his generation, made his debut for Calvin Klein on Friday, offering a tribute to America in one of the most eagerly awaited New York shows in years.

The 49-year-old Belgian former creative director for Christian Dior sent out men’s and women’s wear in what the program called an homage to America, a contrast of sports chic and double-breasted suiting.

Simons, whose career has straddled Europe and America, offered an outsider’s take on the diversity that makes up the contemporary United States as part of his mission to revive the iconic New York label best known for its racy underwear ads decades ago.

From the look that shouted modern urban, to the white bandanas sent to guests to promote diversity and the closing track — David Bowie’s “This Is Not America” — it was hard not to see shade being thrown at President Donald Trump and his administration’s assault on immigration.

“All these different people with different styles and dress codes. It’s the future, the past, Art Deco, the city, the American West,” wrote Simons in the program notes.

“Not one era, not one thing, not one look. It is the coming together of different characters and different individuals, just like America itself. It is the unique beauty and emotion of America.”

Simons emerged at the end with Pieter Mulier, his long-term colleague and former right-hand man at Dior, before being mobbed backstage by well-wishers.

From the ceiling hung distressed fabrics and balls of wool, in a set designed by Ruby, who was born to a Dutch mother and American father, and whose work features in museums such as the Tate Modern.

Calvin Klein last year put Simons in charge of the entire brand’s creative strategy, uniting all its clothing, underwear and jeans under one vision as it seeks to grow to $10 billion in global retail sales.

Simons, who also runs his eponymous label, was previously best known for breathing life into Dior after John Galliano was fired in 2012 following an outcry over anti-Semitic insults he made in a Paris bar.

“Not since Mr Klein himself was at the company has it been led by one creative visionary, and I am confident that this decision will drive the Calvin Klein brand and have a significant impact,” said CEO Steve Shiffman at the time.

“I really liked it,” Imran Amed, founder of the London-based Business of Fashion website, told Agence France-Presse after the show.

“It’s quite a departure. When you change creative directors, part of the reason you do that is to get a new energy, a new direction, and I think they very successfully achieved that,” he added.

“That he dared to try to live up to the founder’s legacy and say something bigger and more visceral with his clothes — could make all the difference,” wrote New York Times fashion critic Vanessa Friedman.

Here are other highlights of fashion week day two:

— Oday Shankar, a red carpet designer with Iraqi roots, presented typically elegant evening wear in an personal show that he said was inspired by overcoming difficulties in life and “creating something beautiful.”

There were his trademark billowing, two-tone gowns and pleated skirts, and sequined tweed that glittered and hugged the figure.

— Retailer Kate Spade invited guests to sip mimosas and nibble blinis with caviar at The Russian Tea Room in tribute to 1920s Paris and “heroines who defy expectations.”

Models sashayed on a leopard print platform to the sound of a waltz. It was a very feminine collection with lots of red and poppies, with a stand-out purse in the shape of a chocolate cake with cherries on top.