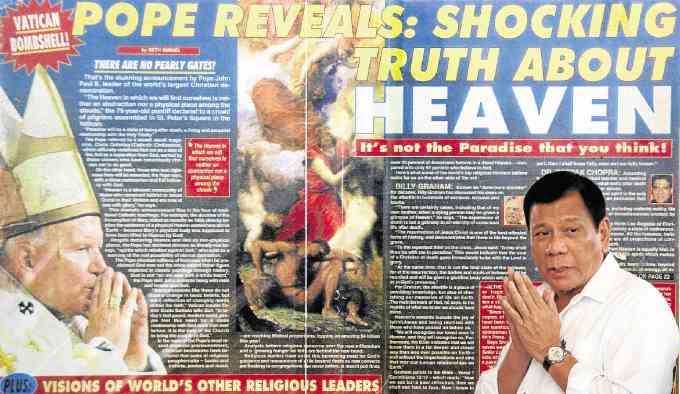 In 1999, the above topped the news as the Vatican Bombshell. Today in 2017, we find President Rodrigo Duterte agreeing with now Saint John Paul II.

Duterte’s views on religion are logical

Your mantra for the week: God gave us sex to experience pleasure of the most wonderful kind.

The media has recently reported that “President Duterte, a Catholic who claims to believe in God but not in religion, said only a ‘very stupid’ God would allow his creation to suffer and to go to hell.”

It seems to me that President Rodrigo Duterte has gotten a copy of my lecture at the TOPPP (Temple of Prayer, Peace and Prosperity) on April 28, 2012, when I talked about then Pope, now St. John Paul II’s announcement in the Vatican City “to forget the flames and the devil with pitchforks.”

Truth is, I had quoted the Vatican pronouncement in my book, “A Miracle Awaits You,” published in 2002. The Pope said further “that heaven was not up in the clouds and hell was not a physical place either.”

Without being explicit, he implied that they were simply states-of-mind.

In that lecture, I emphasized that the concept of a geographical hell (dagat-dagatang apoy) was totally absurd.

The idea of it being a state of mind, I said, was rather incredible because a state of mind was fluid. I explained that there was no need for such a place for the following reasons:

1) There is nothing to be gained by creating a sea of hellfire without end, for there can be no learning in eternal damnation.

2) Why would Infinite Intelligence (God) create a place for inflicting suffering on those who simply “missed the mark”—the origin of the word “sin”—and who could easily make up for it by taking aim again. To make a mistake is not the same as to be “a sinner”; to be the latter brings about a feeling of being unworthy of receiving God’s blessings and will instead attract the corresponding punishment because man believes that whoever “sins must be castigated.

3) How can a God of love be so cruel and sadistic as to create a place where one roasts for eternity? My Chinese best friend says, jokingly, “If I make it there, I will put up an ice plant (ganda negosyo benta yelo).”

In IAMISM, we believe that God is Invisible-Energy-Intelligence and not a being somewhere up there that stands in judgment. It is the way we use the “I AM” within each one of us that determines the “hellishness” or “heavenliness” of our lives. Please take note that in Exodus 3:14, the name of God is, “I AM THAT I AM.”

Moreover, it is also the safest sex that one can recommend. Also, it can reduce or even eradicate infection with the HIV virus, not to mention, lessening sexual abuses that members of the Church have committed, like the recent 4,444 cases in Australia.

I sincerely and fully believe in God, Reincarnation and Karma, but like Duterte, I do not believe in religion because religion has been the cause of all wars in this world.

Joseph and Nel Calata’s baptismal reception for their third daughter Aurelia—nicknamed Aria and born on October 10th, like their second daughter Alessandra—was held at the Rigodon Ballroom of Manila Peninsula. It’s the most elegant baptismal reception I have yet attended—decorated by celebrity event stylist Gideon Hermosa, who also happens to be a florist, thus making the floral table arrangements truly exquisite.

I had the pleasure of sharing a table with three of the most sociable ambassadors in town, namely: Ambassador Effie Ben Matityau of Israel, Ambassador Rolando Guevara Alvarado of Panama and Ambassador Julio Camarena Villaseñor of Mexico.

Catch the last show date of “Vanya and Sonia and Masha and Spike,” a Chekhovian-like three-act play by Christopher Durang at 3:30 this afternoon in Greenbelt I.