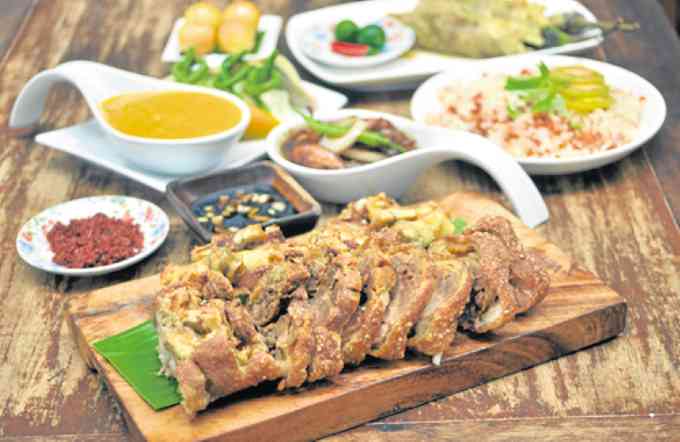 A culinary and historic tour of Nueva Ecija

A recent trip to Nueva Ecija was filled with culinary delights and glimpses of its glorious past. Nueva Ecija, an agri-tourism province, has long been regarded as the Rice Granary of the Philippines.

The visit afforded views of farmlands lining the national highway—fields of green as far as the eyes could see. Farmers with bent backs were tilling the soil. It was a beautiful scene straight out of an Amorsolo painting.

But it was a poignant portrait as well—that the Filipino farmer is beset by land and labor disputes brought a certain sadness.

“The strength of our province lies in its untapped tourism potential,” he said. “We also have vast tracts of lands and an untapped labor force, ready to serve the tourism industry.”

The Bureau of Postharvest Research and Extension (BPRE), the Bureau of Fisheries and Aquatic Resources (BFAR-NFFTC), and the National Freshwater Fishery Technology Center are also based in Muñoz.

The Harvest Hotel in Cabanatuan City is a good place to stay when visiting Nueva Ecija. Its accessible, convenient location is perfect for those on a recreational tour or even a business trip.

Harvest Hotel has a total of 83 rooms with sufficient amenities. It was built and is run by the same group that manages the excellent Picasso Boutique Hotel in Makati.

The Harvest Hotel is a good gauge of Nueva Ecija’s progress and development. The establishment is filled with local and foreign businessmen, and the buffet dinner at night is packed with Cabanatuan residents.

An interesting food destination is Hapag Vicentico’s, the go-to place for good eating, according to most Novo Ecijanos. The main branch in Cabanatuan City is located in an old Spanish colonial house.

The interiors evoke authentic Filipiniana, filled with antiques and capiz shell windows. There is an airy courtyard in the middle, much like the old houses in Intramuros and Binondo.

Like many Filipino dishes, Nueva Ecija cuisine is not for the faint-hearted.

Hapag Vicentico’s also has a branch in SM Cabanatuan—which in itself was a big surprise because the mall looks as snazzy and posh as the upscale malls in Manila.

Uniqlo, Starbucks and other popular foreign brands are present in SM Cabanatuan.

Leticia Breads & Cakes looked interesting, and one couldn’t resist bingeing on the Mini-Round Toasted Breads, bite-size butter-creamy toasts. There are brownies, cheese breads and other tasty treats as well.

The cinemas in SM Cabanatuan are likewise equipped with the latest 3D curved screens. “Rogue One: A Star Wars Story” was showing at the mall’s 3D cinema.

The best thing to do after a hearty breakfast is to tour the city including the Old Provincial Capitol, a World War II historical site. The building, designed by famed architect William E. Parsons, resembles many American-period buildings in Manila and Cebu.

Taking the Pangatian Shrine Tour leads you to the spot that marks the end of the Death March.

It also commemorates the legendary Great Raid, which was recently depicted in the film of the same title.

After learning about Nueva Ecija’s place in history, you get hungry again and feel glad that there’s SM Megacenter, the second of Cabanatuan’s two SM malls where traditional Pinoy cuisine is served at Joey’s, more sweets at an Edna’s Cakeland branch, and pork ribs, buffalo wings and Cheesy Baked Penne at NYORK Café.

You can’t say you’ve been to Nueva Ecija without having seen the Pantabangan Dam, an emerging tourist destination.

The multipurpose dam provides water for irrigation and hydroelectric power generation while its reservoir, Pantabangan Lake, helps in flood control.

The reservoir is considered one of the largest in Southeast Asia and also one of the cleanest in the Philippines.

The dam is also the gateway to Baler, Aurora.

On the way to the dam, one can stop by for lunch at Hillocks Coffeeshop and Restaurant. On a cool day, the weather much like Baguio, Hillocks can whet the appetite. The longganisa was particularly good, while the coffee and hot chocolate were heartwarming.

Reaching the dam through the perilous one-way road, one could suddenly decide to continue the journey all the way to Aurora, and reach the storied town of Baler.

The winding mountain paths are filled with blind corners, sharp turns and thick mists, so it’s best to drive in the daytime. —CONTRIBUTED