Tale of 2 designers: How ex-Cardin man–once the darling of Manila’s high society–became a monk | Inquirer Lifestyle 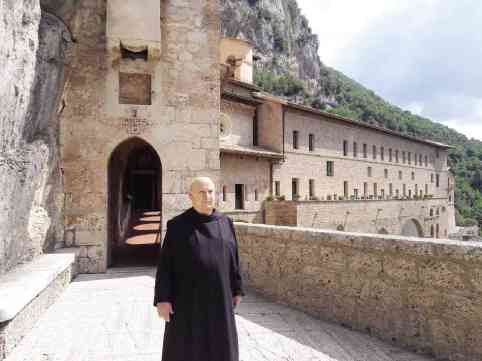 At 75, Giovanni Sanna followed in the footsteps of the author, himself a former fashion designer who gave it all up for the religious life.

“Like Giovanni, I never gave up a dream of my youth—to live a simple life inside the monastery.”—the author

As a Benedictine monk, I find great joy in visiting our monasteries here and abroad. But my last visit to our monastery in Subiaco, Italy, late last year was truly memorable.

It was from Abbot Tarcisio Narciso, OSB, of the Abbey of Our Lady of Montserrat in Mendiola, Manila, that I first learned that the former designer of Pierre Cardin, Manille, Italian-born Giovanni Sanna, had entered the monastery to become a Benedictine monk!

I immediately realized that what I was feeling, a mixture of shock and disbelief, must have been what people felt when they found out about my own decision to close my Gang Gomez House of Fashion in 1990 after almost 20 successful years, to become a Benedictine monk. I promised myself that on my next trip to Rome, I would ask permission to visit Giovanni.

And so on that cool and sunny morning, I drove to Subiaco with my sister, Erlie, and her family to visit Giovanni at Sacro Speco, a site of pilgrimage and a place of prayer since the time of St. Gregory the Great.

After climbing Mount Taleo, we reached the little Wood of Holmoaks, with a long series of steps leading to the sanctuary, plastered to the living rock of the hillside—a veritable swallow’s nest.

I rang the doorbell in the sacristy and Giovanni himself came to open the door, he being the monastery guest-master. As soon as he saw me, he hugged me tightly and kissed me over and over again. We were like two brothers who hadn’t seen each other for a long time.

I knew Giovanni in the ’80s, as the Italian designer at Pierre Cardin, Manille. We saw each other in fashion shows and social gatherings. I admired his work—and I think he liked mine, too—but we were never really close friends.

But that meeting at Subiaco was different. We both felt a bond that was hard to explain. I think it was because we were now both Benedictines, and as we soon found out, shared a lot of similarities in our life journey.

After introducing us to the Fr. Prior, who received our gift, an image of the Santo Bambino by Kapampangan sculptor Willy Layug, Giovanni led us to their elegant receiving room where cappuccino and Italian chocolates were served. My family went to see the other parts of the monastery, while Giovanni and I continued talking.

Giovanni’s difficult decision to enter the monastery at age 75 is really a witness to goodness and generosity. Because of his age, he laughingly said, people tend to address him as “Father,” although he is not an ordained priest, but a monk.

He recalled asking the Archbishop what he should say to those who called him that. The Archbishop replied, “If it is not Father at your age, what else?”

Manila society knew Giovanni Sanna as the kind, jolly designer who, over his twentysomething years at Pierre Cardin, Manille, in the ’80s and ’90s, clothed not only the most beautiful women, but also the most powerful men.

He earned the confidence of then President Ferdinand Marcos and his wife Imelda. He introduced what was soon called the Pierre Cardin barong Tagalog or the “barong Marcos style,” originally created for the Philippine president.

Giovanni shared that he comes from a family of shepherds in Sardinia, and is the last of nine children.

In 1933, the year he was born, his father lost almost all of his 350 sheep. His mother, carrying the newborn Giovanni in her arms, often cried in fear. But his father would comfort her, assuring her that the angel at her breast could be the family’s luck.

His desire to learn tailoring was evident even at an early age. Giovanni recalled that in the years 1943-1944, he went to school on foot, both in summer and in winter, barefooted, but would never miss his classes.

The young Giovanni dreamed big. Inevitably, he came to Rome one day, hoping to get a job as tailor. But it was when he decided to focus on women’s fashion that things started to look up.

In 1955, he landed in the fashion houses of the Fontana sisters. Soon, he found himself designing costumes for a big film production, “The Bible.” He designed costumes for the great actress Ava Gardner.

‘You have to try it’

As he showed me around the enclosure of the monastery at Sacro Speco, he revealed to me that in 1958, when he was 25 years old, he already visited this site, the holy cave where St. Benedict stayed for three years to start his monastic life as a hermit in the sixth century.

Giovanni was surprised to find out that the monk he was talking to then had been there for 43 years! All the young Giovanni could say was, “How nice!” Sensing Giovanni’s hidden desire to know more about the monastic life, the old monk said in a faint voice, “You have to try it.” And Giovanni replied, “Yes, I will.”

But fashion’s call seemed too strong for the young man from Sardinia.

Recognizing his talent, fashion journalist Lidia Fabiani brought him to the House of Christian Dior in Paris. Unfortunately, Dior had stopped accepting male assistants at that time.

His decision to attend instead the school for Pierre Cardin designers proved to be a very good start. Soon, he found himself in Asia—in Tokyo, Hong Kong and finally in Manila.

The rest is fashion history.

“How was Manila?” I asked, as he brought me to the terrace near the refectory of the small community of five monks. He pointed to the windows of the monks’ cells on the upper floors. “The only window up there with the colorful geraniums in flower boxes?” he asked. ‘That’s my cell.”

“Of course, I’m not surprised,” I replied, and we both laughed.

“Of course I enjoyed my stay in Manila!” he continued. “Twenty-five crazy years! I made a lot of wonderful friends, dressed up the most beautiful women and the most powerful men, President Marcos included. I lived like a billionaire without being one, because the Pierre Cardin Boutique was in the hands of wealthy Filipinos.

“You entered the monastery in 1990, right?” he asked. “I stayed on until 2004. When my work in Manila was finished, I returned to Italy as a pensioner.”

But one day, in his beautiful house by the sea in Sardinia, Giovanni realized that there was something missing. A soft nagging voice seemed to tell him to call Subiaco.

And one day, he did. Giovanni told the monk on the other end of the line that he was already 75 years old. He almost couldn’t believe it when the monk answered, “You can try.”

His only surviving sister and other relatives could not believe it, either.

But off he went to Subiaco.

Giovanni showed me the room with the cave-like ceiling in the enclosure, and said, “This is where the Abbot talked to me, my knees shaking with fear. And when he told me that they were giving me the chance to try the monastic life, I jumped with joy.”

He recalled how his novice master, Fr. Mauro, warned him that he would not be able to go home to Sardinia for three years. That didn’t dissuade the 75-year-old applicant. His response: “I will return to Sardinia only when I am wearing the black Benedictine habit.”

It was the same decisiveness I also felt when I decided to enter the religious life in 1990, at age 41. Some of my friends predicted that I would soon be back, for it would be impossible for me to “survive” the monastic life.

A good priest and long-time friend who visited me the day before I left for Malaybalay said it was a pity that I had closed my business and had already given away the sewing machines to my seamstresses. “I have been to that monastery” he said, “and I know you will never be able to persevere in that place.”

But I answered him, “Never underestimate the grace of God, Father. Nothing is impossible with Him. And if it is in God’s plan that I shall become a Benedictine monk, then it will come to be, by the grace of God.”

That was 27 years ago, and I’m still here in the monastery. This year, 2017, I shall be celebrating the silver jubilee of my monastic profession. God is so good!

Like Giovanni, I never gave up a dream of my youth—to live a simple life inside the monastery. And the Lord led me to the Monastery of the Transfiguration. I would be a hypocrite if I said that I didn’t enjoy my life as a fashion designer. I did, immensely!

But like Giovanni, I wanted more out of life. And what I was looking for, what was missing, could not be found where I was—not in the outside world of fleeting joys and material pleasures.

Sometimes the events of the past will appear in one’s mind, like a series of flashbacks on a giant screen of the mind. Giovanni spoke of having this experience, too, as he sat by the seaside in Sardinia.

To remain authentic and true, one has to continue the search, rather than retire in comfort, no matter what one’s age. There is a point when one’s search for meaning becomes a burning fire that gives light and life to one’s existence. The Lord is calling us each day, but perhaps we are too busy to listen.

How much time do we really spend listening to God?

He has great plans for us, He wants to lead us to our unique vocation, whether married life, single blessedness or even the religious life. And even if we think we have already “discovered” our vocation in life, still we have to continue listening.

I thank the Lord each day that I was given the chance to search for that meaning as a Benedictine monk. Giovanni, too, spoke of that gratitude in his heart, for the chance to find the true meaning in life.

Giovanni and I both believe that many are searching in life. That many have stopped believing in the dreams of their youth. Perhaps it is time to rediscover that dream.

And if by chance, it is a dream about the religious life, we would like to say, “Come and see for yourself.”

Giovanni promised to visit the country this year to help promote the monastic vocation. Who knows what God has in store for those who are searching?