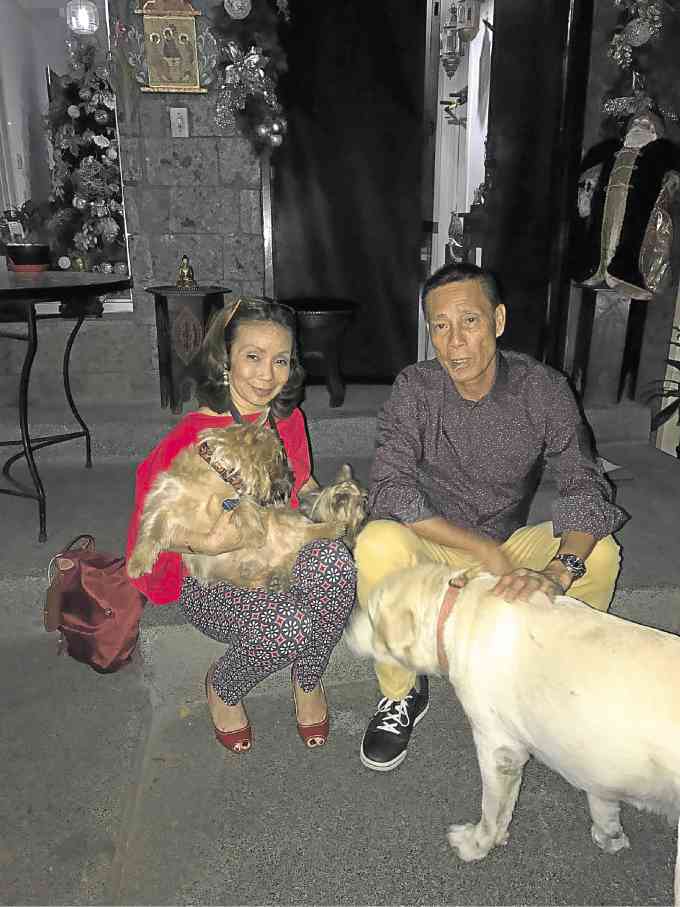 Maritess and Renato Enriquez with Nemo and Philip

In a ‘love triangle’: Renato and Maritess Tantoco-Enriquez

Luxury retail scion Maria Teresa Tantoco-Enriquez—Maritess to friends—has always been known to love dogs. But not as much as she loves the two most important men in her life, her father, Ambassador Bienvenido Tantoco Sr., and husband, Renato Enriquez.

“Every time I wake up in the morning, I’m always thinking of my dad’s plans and my husband’s plans,” she said. It’s a “love triangle” that works because Renato and Maritess were already mature when they got married.

In December 1999, Renato was in the midst of a divorce from his Australian wife of 18 years. He was a trade officer in the Philippine Consulate in Sydney when he came to Manila.

“I was trying to get myself together after a marriage breakdown. Then came Maritess,” he recalled. Their 17-year age gap didn’t matter.

His close friend, Jess Sarmiento, had invited him to a dinner hosted by Zenaida Tantoco, head of the family-owned Rustan’s and SSI, in her residence. Renato sat beside the hostess’ youngest sister, Maritess, who knew everybody at the table except him.

Renato was immediately captivated by her charm. She talked about her work as the general manager of Style de Vie, the family-owned luxury retail business in Casablanca, Morocco, and her travels around Europe.

She noticed that Renato ate little. He said he was diabetic. While there was dancing after dinner, Renato and Jess left the place early to attend to their little snack business in a theme park at the Fort.

Renato tried to get a date with Maritess, which she refused. In time, she invited him to dinner with her friends. He brought a pot of fresh casablancas, one of her favorite flowers.

For the next three years, Renato and Maritess carried out a long-distance romance between Australia and Morocco. Back then, they chatted through ICQ, an instant messaging program.

Renato longed to see her, but Maritess refused. She wanted some assurance that he was divorced. To prove that he was serious, he mailed her the official documents. They met in Paris on one of Maritess’ buying trips.

Renato said he found his match. “She was bright and business-minded.”

As if to further test his sincerity, she invited him to Morocco, provided that he pass by New York to bring a newborn Yorkie to Casablanca. Renato became a dog sitter on the long-haul flight, with the newborn puppy beside him in business class.

As a further test, Maritess wanted to get a “reaction” from her dogs in Casablanca. “They could sense what kind of person he was,” she said. Fortunately, her dogs gave their wags of approval.

She also flew to Sydney to learn more about him.   Renato had been living in Sydney for 30 years, working as manager at the Hilton Hotel and eventually the Philippine Consulate. He has three children from his previous marriage—Amy, now 33; Jules, 31 and Chloe, 29.

As the relationship became serious, Maritess wanted to make sure that Renato was the one. She asked her father if Renato could stay in Morocco. The patriarch agreed that he could stay in their house as long as they didn’t sleep together.

In those months, Renato helped in the renovations of Style de Vie. The couple also explored various parts of Morocco. Maritess got to know him better. “Living under the same roof helped. I became familiar with his moods and habits. There were no doubts in my mind about him,” she said.

Their relationship fell into place naturally. “He made me laugh and we felt very comfortable in our conversations,” she said.

On a trip to Milan, Maritess, after a business meeting and lugging her bag, was asked by Renato to take a stroll. Maritess said she would do it only if he carried her heavy purse. To this day, he has no qualms about holding her bag on their travels.

Renato proposed to Maritess on the beachfront of Amanpulo resort. Over champagne, he popped the question while a guitarist serenaded them at sunset.

A civil wedding was officiated by then Mayor Jejomar Binay, a close family friend, in 2004.

The following year, they had an intimate church wedding attended by immediate family.

Meanwhile, Style De Vie, was closed down. The stiff import duties and value added taxes made the merchandise more expensive. Its target market, affluent clientele, preferred to shop in Paris instead. After this stint, Maritess became a buyer-consultant for Rustan’s fine jewelry department.

Maritess faced pregnancy risks. She got pregnant in 1997, but suffered a miscarriage in her first trimester.

Destiny had another plan for her. “I’m there for my father,” she said.

For nearly a decade now, she has been taking care of Tantoco, who is turning 96 years old this April.

The way the ambassador’s children and grandchildren take turns looking after the patriarch, or just keeping him company, is incredibly awesome. If one needs proof of how the Filipino family prioritizes looking after its elders, this is it.

Every day of the week, Tantoco is always in the company of his children or grandchildren. Maritess lives close to her father so that she can be at his beck and call.

She even has a gadget that tells her at night how well her father, who lives alone in his house, is sleeping.

When her father was undergoing medical treatment in the US, she spent a year looking after him in New Jersey. Renato shuttled between the US and the Philippines.

Renato understands that his wife has to attend to her father. “He’s not demanding,” said Maritess.

He has been enjoying semi-retirement and the life of a gentleman farmer. On weekends, he tends to their farm in Lipa, Batangas, which cultivates coffee, coconut, mango, avocado and papaya. It has a menagerie of horses, chickens, cocks, geese, pigs and an ostrich.

Still, Renato and Maritess make time for each other.

“We go out a lot, watch movies at Central Square and have meals together,” he said.

When Renato comes home, Maritess makes sure that they converse. “He reads biographies, while I watch my TV movies in my computer before we sleep,” she says. Nemo, a Yorkie, sleeps with them.

“Nemo prefers to sleep by Renato’s feet,” she clarified.

“I can’t imagine our life without dogs,” said Renato. Their farm is home to 10 askal.

Maritess attributes the strength of their marriage to respect. “We trust each other, and we make sure we make time for bonding.”

Renato cited compatibility. “We both share hobbies such as diving, biking and traveling. When we go out to dinner, our eyes light up. We find new things to do, like pilgrimages.”

This year, the couple plans to take a longer walk, from Portugal to Santiago de Compostela.

“While walking, we enjoy nature, look at the sights and enjoy local food. It makes life simple but fun,” he said.