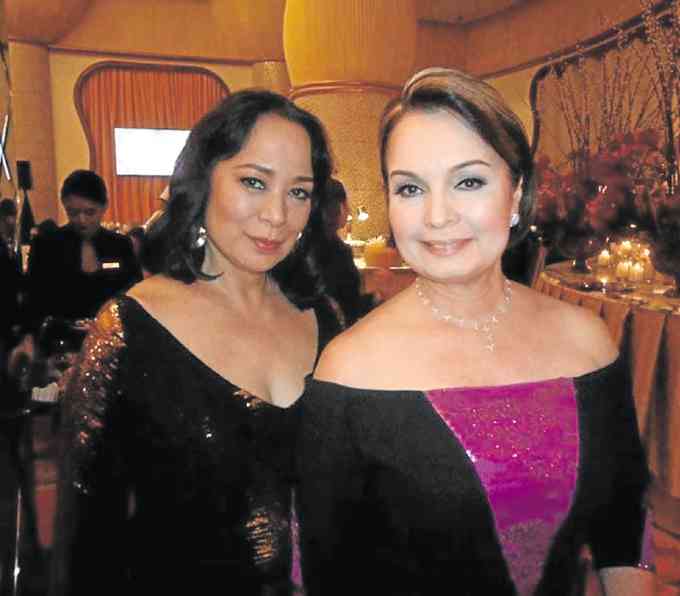 Weaving through a mammoth crowd, standing in a queue for two blocks on a barricaded driveway of the Mall of Asia Arena at 7 a.m., in my black Cary Santiago gown and with evening makeup on—I was not exactly sure where I was supposed to go, but that was just one of the situations I found myself in throughout the recent Miss Universe 2016 event.

By then, being overlooked in the proceedings had become par for the course. Nonetheless, the irony of getting better treatment on similar occasions abroad did not escape me. So this is how past icons are made to fend for themselves when Manila gets heady with hosting international events!

Thankfully the crowds along the way, recognizing me, flocked around and made me smile for their selfies, making me forget, albeit temporarily, the agony I was in. Seeing some of them wearing small replicas of the Miss Universe crown was quite amusing, and helped dispel much of my chagrin.

There had already been several oversights since the pre-pageant activities began. For most of the events, Gloria Diaz and I solicited our invitations, but noblesse oblige compelled us to tolerate the mounting incidents as regally as—well—ex-Miss Universe winners should.

I feel I should impart important lessons, though, on protocol and decorum, or mistakes will be repeated. But that is getting ahead of my Amiss Universe 2016 story.

In the lobby, a committee staff member finally found me and escorted me to the usher who would take me to the seat that matched my VIP AA ticket.  My chair had my name on it, and beside it was the chair reserved for Gloria Diaz.

Our location was the extreme side of the stage closest to the backstage, next to the seat reserved for Vice President Leni Robredo, putting her an even shorter distance from the restrooms.

Fifteen minutes before the show, two well-dressed ladies were escorted to our area by a staff member who asked Gloria and me, “Can you please move two seats?”  The transfer moved us closer to the restrooms.  Thank heavens the Vice President didn’t show up, because by now she no longer had a seat at all.

From where we were, no way could we be caught on camera, no matter how much we stretched our necks. The focus was on the politicians and sponsors seated behind the judges.

To fully appreciate the show, I had to watch bits and pieces on YouTube later, because from our disadvantaged view, what we saw were the beautiful candidates’ behinds—clearly not the side we should have been entitled to.

Then the show began. Maybe I am locked in the past, but there were certain elements I missed from my time, elements which make the Miss Universe pageant  the cut-above-the-rest extravaganza that it is.

The patent opening number that, for many years, had gotten the candidates and the worldwide audience into high energy was the National Costume Parade. That portion was a veritable show in itself as each candidate, at the top of her voice, introduced herself and called out the country she represented.

Four decades ago, in my Aureo Alonzo terno, I proudly shouted for all the world to hear, “Ako po si Margie Moran from the Philippines!”  After that, every provincial and city pageant, including every Miss Gay Philippines, used that energized declamation.  Clearly, it is a most empowering gesture.

For this pageant, it was a female host who called out the countries to the beat of a hip hop number performed by a mix of foreign and local dancers led by Flo Rida. The pride of place that contestants expressed for many years, as I did when I opened the show both in Manila in 1974 and in Mexico in 1978, was one important feature that was wrongly eliminated.

The pageant’s overall theme thus diminished, the beauty of the host country was likewise ignored.  This disappointment was echoed the next day when I went to the Batasan for a hearing with the Basic Education Committee.

A congressman asked why no cultural presentation was staged. A Facebook friend also commented that Makati and Bonifacio Global City should have been showcased for everyone to see how our capital can give other metropolises a run for their money, while at the same time, we have provincial towns like Vigan to preserve historical value.

This was recently lamented by Miss Universe 2005 Natalie Glebova in her review, citing the show’s lack of Filipino cultural significance.  “There were hardly any elements to showcase the rich and beautiful culture,” she said, citing how compleat Thailand’s version was, with everything from the music to the elephant to the tuk-tuk, when it hosted the pageant the year she won.

I echo this sentiment.  We did splendidly with our settings, music and dances at the 2015 Apec event.  Investors like the Singson group should have leveraged this to accomplish the same for the 65th Miss Universe pageant.

Lines blur between command responsibilities of the franchise owners and the host country. While I hope lessons will be learned from the blunders of this year, I note the changes that have kept the Miss Universe contest relevant—a dynamic, game-changing hallmark of accomplishments, if not a substantial aspiration for women the world over.

The format has changed, and so has the criteria for winners.  In the early years, 12 semifinalists were further vetted in the interview portion. The number was later narrowed to five. The format kept changing, and in this pageant, first there were 13, then nine, then six, and finally three.

My personal choices who made it to the top 13 were Colombia, Philippines, Brazil, Indonesia and Thailand. I felt bad that Brazil and Indonesia did not make it further. The candidates should know current events and their own advocacies, in order to answer the predominantly political questions of host Steve Harvey.

A beauty queen cannot just be a pretty face; she must be able to articulate her thoughts, and back it all up with substance.

As Miss Universe 1994 Sushmita Sen said, “There will be a lot of pressure to be a Barbie doll.  Keep it real!”

Pia Wurztbach became good at this and her intelligence, wit and beauty will open doors for her.  She just signed up with IMG, and that will give her a profession in the international arena. Pia works hard, and my intuition tells me that she will soon become an international star.

I was happy that Miss France Iris Mittenaere won. She was beautiful and answered her question well. I would actually be pleased if either of the runners up, Miss Haiti or Miss Colombia, won instead, although all three were outstanding and truly owned their respective moments in the limelight.

The new owners of Miss Universe, the agency WME/IMG, known as William Morris Endeavor, with its subsidiary, International Management Group, is a global sports, events and talent management company. It is a huge conglomerate affiliated with 21st Century Fox. With public opinion on social media contributing 20 percent of the score, the contest’s format needed to be applicable, thereby making it more commercial.

There were only six judges this time. I recall the 1973 judges included movie and TV personalities like German actor Horst Buchholz, actresses Lynn Redgrave and Ginger Rogers, designer Hanae Mori, Spanish bullfighter El Cordobes, and about three more of equal distinction whose names I can no longer recall.

My personal finest moment was being honored with Gloria Diaz and Pia Wurtzbach at Okada Manila, the new casino and resort in Entertainment City, by no less than its chair, Kazuo Okada. I was thrilled to be chauffeured in the casino’s luxurious black sedan, a Bentley, to the event.

I was delighted to have the pageant in Manila, despite its organizational shortcomings and widespread criticism that the event was a distraction from current events in the country. I think we Filipinos needed that respite from the gloomy news, not only locally but the world over.

The Department of Tourism did a good job of putting the Philippines top of mind globally at the year’s beginning, making it an achievable goal to bring in its target of five to six million tourists before 2017 is over.

The Miss Universe fever will die down soon, and I will finally enjoy uninterrupted playtime with my granddaughter, Cosima, and focus on my advocacies, Habitat for Humanity, Mothers for Peace and Ballet Philippines.

Past winners are always acknowledged in the Miss Universe pageant proper.  That didn’t happen this year. No one arranged for us to meet and have pictures taken for that one memorable occasion. There was a chance at the red carpet presentation, but no one organized a press conference, much less a photo op for this overload of wise and wonderful women.

Having said that, I stand by the title of this article.

Peace to all who might learn belatedly from lost chances!

The author was the 1973 Miss Universe.