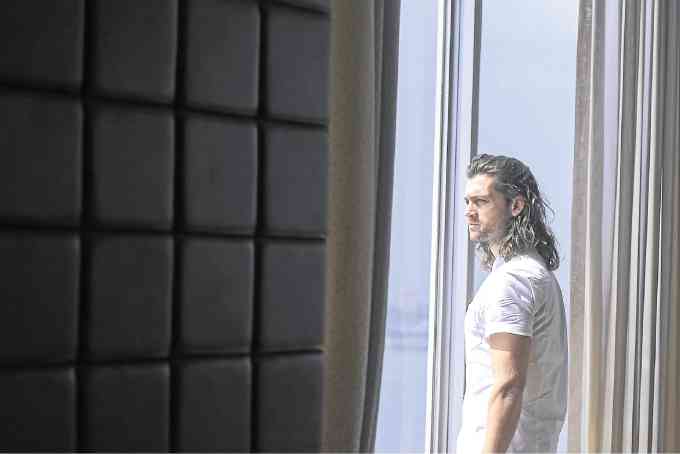 We channeled our inner Elphaba and sang the dramatic song of love that has surrendered—in our head, of course. Less than a minute into the interview and Bradley Jaden already broke our heart.

“I [just] arrived from the UK; my fiancée’s there,” Bradley said.

“Fiancée.” We were slightly dazed at the sound of it. Had we been standing, we would have collapsed on the floor.

It was “confusifying,” to borrow from the Ozian Glossararium, but it also made sense.

Of course, a man who plays Fiyero Tigelaar, the Winky Prince of “Wicked”—with his fine locks that fall on his shoulders, and green, piercing eyes and well-groomed beard—would have a fiancée.

We got over it pretty quick. This was work, after all, and we had to be professional (and we also have a boyfriend). We came to Diamond Hotel to experience “A Romantic Sojourn,” with Bradley—for journalism’s sake.

We were on the 27th floor of the hotel overlooking Manila Bay, and although we have seen Bradley’s photos in the promos beforehand, we were still starstruck, more so when we heard his accent.

He was in a white top and jeans, and while we weren’t underdressed—we Galindafied for the day—we looked like a Tita in our sheer baby blue top and navy crop pants. (We blame our renewed Korean drama obsession.)

It was hard to imagine that Bradley weighed more than 100 kilograms when he was the understudy of Shrek in the West End production many years ago.

“I lost six-and-a-half stones (40 kg) because I was told to. When I was in ‘Shrek’ I was a lot bigger, but I was told if I lost weight I’d be a lot more successful,” Bradley said.

The hard work paid off. Since he dropped the weight, he landed the understudy roles in “Ghost,” and Jean Valjean and Enjolras in “Les Misérables.”

“In our industry you have to change our image and change the way we look to adapt or give us an extra chance,” he said matter-of-factly.

Keeping the appearance is part of the job. Bradley trains in the gym every day, he keeps the hair and follows a strict diet. He auditioned for Fiyero while he was still an understudy in “Les Misérables.” The “Wicked” crew was impressed with his locks and asked him to keep it.

He said that high vocal standards and image are ways of keeping in the game, with the stiff competition out there.

“Maybe it is a little bit shallow, but it is what it is at the moment. But I think in any career you’re perceived in a certain way, by the way you dress, by the way you look,” he added.

Even though Bradley has come a long way, from the understudy of Enjolras to his first lead role as the Winky Prince, he said that social media has made him image conscious, with anyone always ridiculed for the flabs and imperfections (case in point: Lady Gaga in her fantastic Superbowl LI halftime show).

“I’ve lost a lot of weight and I’m probably the most insecure I’ve ever been,” he said.

“Wicked,” the award-winning show dubbed by The New York Times as “the defining musical of the decade,” talks about “The Untold True Story of the Witches of Oz,” before they were categorized good and wicked.

Elphaba, a promising emerald-skinned witch meets the bubbly blondie Galinda in Shiz University where they become the closest of friends.

The musical written by Stephen Schwartz and Winnie Holzman talks about being comfortable in one’s skin despite the standards and pressure of society. In Act One of the show, Elphaba undergoes “personality dialysis,” under Galinda’s supervision, to become popular.

In 2014, “Wicked” flew to Manila and captured the hearts of many Filipino fans. After each show, fans lined up outside the actors’ exit to stop them for an autograph or selfie.

“If you say ‘Wicked,’ it’s a wonderful show that allows you to be whoever you are,” Bradley said.

Catch Bradley Jaden in the “thrillifying” production of “Wicked” at Solaire Resort & Casino until March 12. Visit www.ticketworld.com.ph or call 8919999.