Mañosa at National Museum: The Filipino artist who should have been National Artist | Inquirer Lifestyle ❮ ❯ 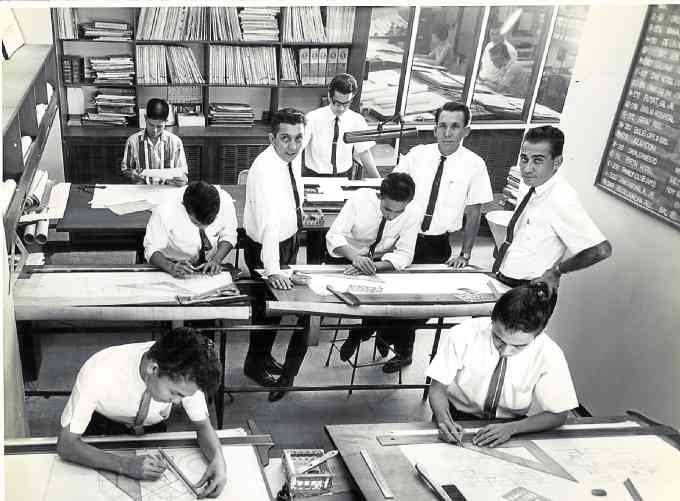 Mañosa (standing, second from right) at the Mañosa Brothers firm in the late 1950s

Mañosa at National Museum: The Filipino artist who should have been National Artist

“I design Filipino, nothing else.”

Few architects can make that boast, and it has cost Francisco “Bobby” Mañosa dearly.

In the 40 years that he ran his architectural firm, Mañosa has turned down millions of pesos worth of lucrative projects, even in the lean years when the company was surviving from payroll to payroll, because the owners insisted they be done in whatever foreign style was trendy at the time.

His stubbornness has paid off in other ways, however.

Today his reputation as a pioneer in the development of contemporary Filipino architecture is at an all-time high, despite the 2009 debacle when he was named National Artist for architecture by then President Gloria Macapagal-Arroyo, only to have the award withdrawn by the Supreme Court because it was given illegally. (Many still believe he fully deserved the accolade.)

“Mañosa is one of the most influential Filipino architects of the 20th century,” writes architect and scholar Gerard Lico.  “He staked out the ground for a vernacular consciousness to flourish in the post-colonial architectural scene. Highly regarded as the pioneering figure of neovernacular architecture in the Philippines, Mañosa designed buildings of primal beauty, revealing the vital virtues of Filipino identity and its tropical context.”

Now the man who designed the Coconut Palace, the Edsa Shrine, the world-renowned Amanpulo and Pearl Farm resorts and many other landmarks will finally get his due.

“Mañosa: Beyond Architecture” is a three-and-a-half-month retrospective exhibit on the architect’s life and work, which opened Feb. 12 at National Museum.

Apart from original drawings and models from the architect’s body of work, the exhibit will include new and archival photographs, examples of indigenous materials, furniture, interior design elements and audiovisual presentations, representing approximately 50 projects from all phases of his prolific career.

Accompanying the exhibition is a lecture series for architecture and design students that will run Saturdays at the National Museum Auditorium from February to May.

Admission is free for students, but limited to 150 slots per lecture.

Born on Feb. 12, 1931, Mañosa grew up in a genteel neighborhood on Azcarraga Street in Manila. His father, Manuel Sr., was a Harvard-educated sanitary engineer who was in charge of the metropolitan water system. His mother, Maria Tronqued, was an actress in the early years of Philippine film.

Bobby—the American-style nickname was adopted following the Liberation of Manila—was a gifted, instinctive musician who taught himself to play the piano. He had wanted a career in music, but his father insisted he study architecture.

He enrolled in the architecture school of the University of Santo Tomas, and it was here that his quest for the essence of Filipino architecture began.

In the 1950s, the modernism of Le Corbusier and the International Style were all the rage, but Mañosa was drawn to the iconoclastic American genius Frank Lloyd Wright and his idea of “organic” architecture, where the building blends with the surrounding landscape.

After graduation, Mañosa spent some time in Japan, where he imbibed the spirit of traditional Japanese architecture, which had also inspired Lloyd Wright. In particular, he was struck by how perfectly their design expressed and embodied the culture of the Japanese.

He went home convinced that Philippine architecture should do no less for Filipino culture.

Mañosa’s touchstone was the bahay kubo.

Despite its simplicity, it had survived as a design for centuries, because it worked. Built out of native materials that were easily obtained at minimal cost, the bahay kubo was eminently suited to the tropics. It was low-cost, environmentally friendly and sustainable—everything that modern architecture aspired to.

Of course, modern, urban-dwelling Filipinos could not be expected to live in bahay kubo, or even its more evolved version, the bahay na bato. These designs had to be transformed to suit modern needs.

In his notes to the exhibit, Lico illuminates the seminal period when Mañosa found himself as an architect:

“His approach to traditional design is based on the ability of the architect to identify the essential building elements and to translate them into a contemporary image. His architecture is not a mere mechanical mimicry of vernacular architecture, which many would think to be locked in time. He initiated a contemporary mode that uses and revitalizes the knowledge from previous generations, recovering age-old constructive methods and finishing materials, emphasizing their optical and thermal qualities.”

In short, Mañosa developed a style that was at once recognizably Filipino, yet still modern. He championed the use of indigenous materials, and experimented with new technologies for transforming them into usable modern building materials.

But beyond merely looking Filipino, the design had to suit the Filipino way of life. Spaces were configured to allow for family interaction and conviviality, both cherished Filipino values.

Mañosa’s first design successes came while he was working with his brothers Manuel Jr. and Jose—both fellow architects—in the family firm the Mañosa Brothers. This period culminated in the landmark design for the San Miguel Corp. headquarters, which drew on the Banaue rice terraces for inspiration, and was ahead of its time with its “green” design features.

In 1978, shortly after he formed his own firm, Mañosa received a once-in-a-lifetime commission when then first lady Imelda Marcos tapped him to build a guesthouse fit for royalty—the artistic royalty that performed at the Cultural Center of the Philippines, that is.

The brief was simple: It had to embody the best of Philippine culture, and it had to make extensive use of the coconut tree. The government had just launched a massive project to replace millions of aging coconut trees with a new, higher-yielding variety, and tons of coconut lumber would be available.

Beyond that, he had carte blanche, an open-ended budget, and the resources of various government agencies at his beck and call. The result was Mañosa’s tour de force: the Tahanang Pilipino, better known as the Coconut Palace.

Conceived as the bahay na bato in excelsis, building the Tahanang Pilipino stretched his creative abilities further than any project up to that point. Research and development for the project resulted in new materials and new industries, some of which have continued to the present.

More importantly, it allowed his ideas to crystallize into a coherent philosophy, one that he would articulate again and again in articles and lectures to architecture students, and to anyone who would listen.

“After knowledge and awareness must come acceptance. We must remove the mantle of inferiority that foreign domination has placed on us. We must believe in ourselves, our capabilities, innovativeness and creativity, and stop imitating alien cultures and architectures. We must believe that in accepting what we are and what we have—both their limitations and their potentials—we can finally emerge as equals.”

This nationalist philosophy would continue to guide Mañosa in the decades that followed. He has since designed many other landmarks, from the Edsa Shrine to the new Medical City building.

His feel for tropical design has led to commissions such as the Amanpulo Resort in Palawan and the Pearl Farm in Davao. A flair for distinctive, supremely livable and ecologically sound homes has made his firm one of the most sought-after for premium private residences. A spin-off company, Mañosa Properties, is attempting to translate this philosophy into condominium and townhouse developments.

Now 86, Mañosa has retired from active design, but his life’s work continues through his architectural firm, and generations of younger architects he has influenced and inspired.

“Mañosa: Beyond Architecture” runs Feb. 12 to May 31 at the Trustee’s Hall, 4/F, National Museum of the Philippines.