'Kimi no Na wa' bus brings fans to the countryside and back | Lifestyle.INQ ❮ ❯ 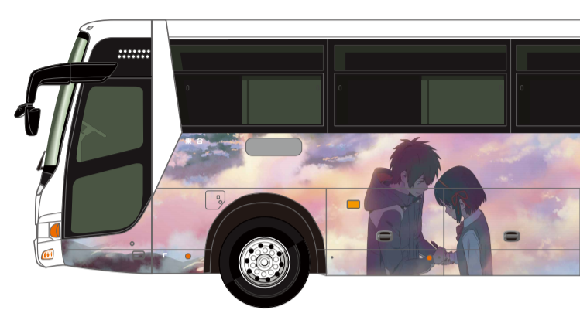 While it did not qualify for the Oscars, the popularity of “Kimi no Na wa” (Your Name.) is still undeniable. Apart from the pilgrimage tour package currently being put together by the Anime Tourism Association, a themed bus is being prepped for roll out to bring fans on a pilgrimage to the town of Hida in the Gifu prefecture.

The picturesque town of Hida is one of the settings in the movie and is also one of the prime destinations for fans who have gone out to see the real life locations, reports RocketNews24.

Billions of yen have flown into the coffers of Hida City’s hotels and travel service providers, thanks to the success of “Kimi no Na wa”.

The Gifu-based Nohi Bus company that operates long-distance highway buses for carrying passengers between Hida and Tokyo will be wrapping one of its buses with “Kimi no Na wa” imagery. The imagery will feature both protagonists Taki and Mitsuha, as well as some of Makoto Shinkai’s signature environmental artwork.

Apparently, the endpoints for the bus route will be Gifu’s Hida Furukawa station and the Busta Shinjuku bus terminal in Tokyo. The bus will run both directions of the route to allow both city dwellers and rural residents to visit the capital and the countryside.

The “Kimi no Na wa” bus will hit the roads starting February 27 until the end of March 2018. A one-way trip will take six hours and will be priced at 6,900 yen (roughly P3,000). It’s cheaper than most railway and air travel options with the bonus of making friends with fellow fans who are taking the same trip.

Winners of the travel tour package raffle may get the chance to experience this. If not, there’s still plenty of time to book a personal trip to Japan. Alfred Bayle/JB