Why there is no ‘Spanish cuisine,’ only regional Spanish cooking | Inquirer Lifestyle ❮ ❯ 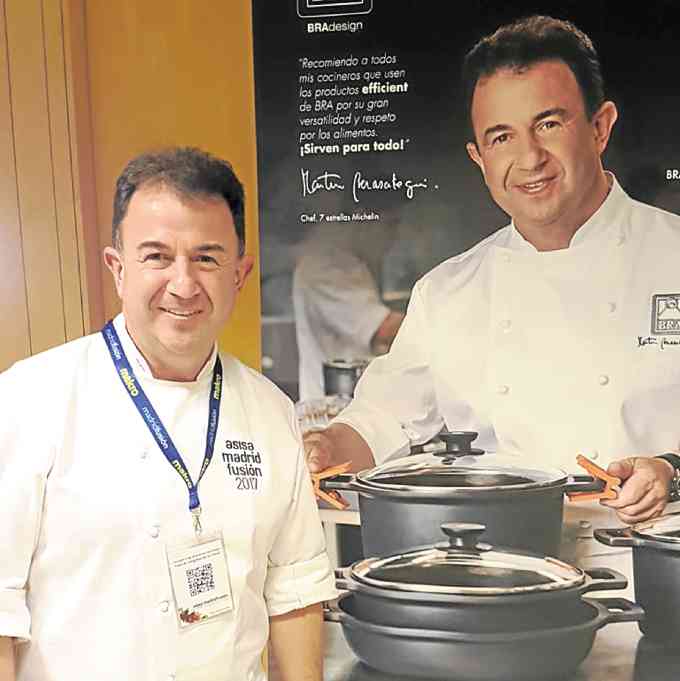 Why there is no ‘Spanish cuisine,’ only regional Spanish cooking

Pedro Subijana’s smiling face behind the handlebar moustache greeted us as we sat to interview him. He was one of the senior Basque chefs present at the Assisa Madrid Fusion 2017, but he was there not to give a talk but to listen to those who were presenting.

Subijana is one of the founders of New Basque Cuisine (Nueva Cocina Vasca), a group of chefs from the region founded in 1976; Juan Mari Arzak served as one its presidents. It was formed partly because “we needed to do something for the Basque culture,” said Subijana, and to share ideas on how to restore and update their traditional cooking.

The chefs were inspired by Paul Bocuse, who came to Spain to talk about French nouvelle cuisine and who invited Subijana and Arzak to France after. The debates during those meetings became, in Subijana’s words, “food for thought.”

Because of the success of the Basque group, many regions wanted to join. The would-be joiners were asked to form their own group so that they could focus on their own cooking traditions and ingredients. This is why, said Subijana, there is no such thing as Spanish cuisine, only regional Spanish cooking.

Subijana attended most of the presentations in the auditorium, a clear sign that this veteran chef with Michelin stars awarded to his San Sebastian restaurant, Akelare, is as open to new ideas as he was 40 years ago when the New Basque Cuisine was formed.

That culinary group has also inspired younger Spanish chefs, who have changed how the world eats. Subijana first mentioned Ferran Adria, then Andoni Aduriz, whom he called a “risk taker.” There’s Joan Roca, who he said thinks of the future as much as he takes care of his people and his customers; and Quique Dacosta, whom he quoted as telling colleagues not to “think of what we have done as the end, [but] think of what we will be like in 15 years.”

When asked what he will present at Madrid Fusion Manila 2017 (on April 6-8) as one of the speakers on the theme Towards a Sustainable Gastronomic Planet, Subijana said he hasn’t decided yet.

He was onstage during the announcement of the conference in Manila, presented by Department of Tourism director Verna Buensuceso. It was a reunion of former speakers at the first conference in Manila, along with Tatung Sarthou, who talked about Philippine cuisine at the latest Madrid Fusion.

On the plane to Madrid, Sarthou told us he would talk about “salt,” an ingredient widely available in our country that comes in both natural and artificial forms. The artificial salts are mostly imported ones, chemically produced just like some of our vinegars. Tatung said cooking with “unnatural salt” will not produce the flavors or the quality of traditional cooking, because it doesn’t melt. And it does not have the minerals present in real salt.

Tatung’s film presentation showed hectares of natural salt beds in Pangasinan. He also made mention of the iodine required by the government to be applied to salt sold locally.

I told Tatung how I once saw iodine sprayed willy-nilly on cooked salt, without any formula as to the volume of salt per iodine quantity. Who checks on that, I wonder. If this can’t be overseen properly, then the law should be scrapped.

His other film was what he showed at the last Madrid Fusion Manila, about Muslim cooking that uses spice mixes, such as the Tausug pamapa itum with burnt coconut and the palapa of the Maranao. It was his way of showing the great variety of Philippine cooking, some even unknown to many Filipinos.

Martin Berasategui was only 15 when the New Basque Cuisine was formed. He said he came to a meeting wearing a polo shirt and told everyone “I am just a cook.” The “cook” was then working at his family’s restaurant, Bodegon Alejandro, where his mother and aunt did the cooking.

The only one of four brothers interested in cooking, Berasategui studied pastry-making in Bayonne, France (really, Basque also). When he took over the restaurant, his mother and aunt retired at a younger age than his age today, he said.

When he talked of his father, Berasategui became solemn and spent some time writing his father’s name on a piece of paper. Our interpreter could hardly keep up with what he was saying, so something was lost in translation. But we understood how Berasategui must miss his father.

Despite starting at a young age and not having worked with any other chef, Berasategui has garnered more Michelin stars (8 in all) than any Spanish chef for his many restaurants (10, including those outside Spain). He has created the Berasategui Group, which oversees the management of his restaurants, his tie-up with products and the training of staff. He might be a great example of a chef who can combine creativity with business savvy.

He thinks Madrid Fusion is a great event, allowing him to link up with veteran chefs and with young chefs who he says will see him as just a “normal guy.”

His “handler” must have thought we were keeping him too long, and so kept on looking in and hoping we would end the interview. When we told him that he might have other appointments to keep, his authoritative persona showed itself.

“I am the boss here,” he reminded us—but said with the disarming smile we saw in a poster advertisement just outside the room.