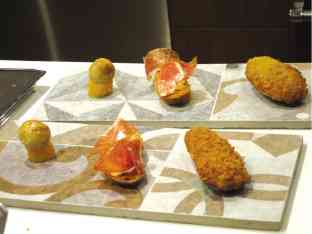 It was a culinary dream team in action, featuring a renowned chef working in the showroom of a top brand of kitchen appliance. The result was a gourmet dinner that materialized, step-by-fascinating-step, right before our eyes.

But where to look during the preparation of the meal was a quandary. On the one hand, there was chef José Luis “Chele” Gonzalez of the widely acclaimed Gallery Vask restaurant, busy conjuring the makings of a four-course meal out of ingredients that included both the humble and the sublime: mussels and strawberries, as well as foie gras and Spain’s prized ham, Jamon Iberico.

On the other hand, there was the range of Viking appliances that is every homemaker’s dream: an induction cooktop that can bring liquid to a boil in a few seconds, a built-in convection microwave oven, and warming drawers that keep food at just the right temperature. The latter made the former possible, with myself and the other guests being the beneficiaries of both.

“In San Sebastian (Spain), we use humble ingredients like chicken, mussels and fruits,” explained Gonzalez as he started whipping up the first course—pintxos, as tapas are called in Northern Spain. After bringing a liter of cream to a boil, he stirred it to evenly distribute the heat, then waited for a few minutes before adding 176 grams of grated Parmesan cheese.

“Cheese should not reach a high temperature or its characteristics will change,” he pointed out.

Assisted by chef Rodrigo Osorio, he then passed the resulting cream through a sieve into a bowl, which he covered tightly with plastic wrap.

As they worked, both chefs made sure to wipe the surfaces clean and to remove any tool no longer needed.

“One of the most important things in the kitchen is to be clean and organized,” he said. With Viking’s sleek showroom and work surface, that didn’t seem to be a difficult task.

Before long, we were served a plate of caramelized foie gras mousse perched on a mango ball, which Gonzalez said we should take in one bite. That one bite yielded a flavor that was simultaneously clean and crisp, smoky and sweet and sensuous.

Alongside was a piece of toast upon which the aforementioned cream and cheese mixture had been piped. It was topped by a slice of Jamon Iberico, an exquisite cured ham made from black pigs that are bred in Spain’s ecologically balanced Dehesa region.

Like the foie gras mousse, this yielded a complexity of textures and flavors: the mildly sweet, earthy Jamon Iberico melding with the satiny Parmesan cream, and both of them balanced by the crunchy toast.

Completing the trio of pintxos was steamed mussel. It was topped with migas, Spanish bread crumbs which Gonzalez made with the fat sliced from the Jamon Iberico, before being fried in olive oil heated to 190°C.

Gonzalez had carefully measured the oil’s temperature with a thermometer that he keeps in his chef’s coat. While some chefs may judge the temperature of the oil based on experience, he says that method could only be 95 percent accurate. His use of the thermometer assures 100-percent accuracy.

If the pintxos was dazzling enough, we were absolutely floored by the next course. Skewered prawns, which Gonzalez cooked on Viking’s induction cooktop, were sliced into four pieces, then carefully laid out on a plate.

“In Vask, we use only local, sustainable seafood,” Gonzalez said as he arranged the slices of strawberries that had been pickled in white wine, sugar and water. After getting a sprinkling of migas and rock salt, the dish was ready for the clincher: cold cherry gazpacho, poured on the side.

“Here we have an interplay of the cold (the strawberries and the gazpacho) and the warm (the prawns),” Gonzalez said.

That may be the understatement of the evening. More than just a game of the warm and cold, it was a tournament of flavors and textures— prawns, salt, migas, strawberries and gazpacho competing for attention in the taste buds.  The thing is, they were all winners.

We could hardly do justice to the beef short ribs that was served next, but the velvety mashed potatoes, enriched with Parmesan cheese, cream, milk and a chiffonade of basil leaves, were too good to pass up.

Gonzalez flashed a mischievous grin as he started to prep the dessert: torreja, Spain’s version of the French toast. For this he had soaked brioche in milk and cream for 24 hours.

Then a rich aroma filled the air as he cooked the brioche in butter, sprinkled it with sugar, and torched it until the sugar caramelized to a rich golden brown finish. This he served with star anise ice cream he made himself.

Only a tour of Viking’s showroom afterwards could rival the gastronomic pleasures of such a meal. Upstairs, we stood in awe in front of an enormous side-by-side freezer-refrigerator with humidity control, easy access drawers, and enough storage for humongous pizzas and party platters.

Another refrigerator had double doors and a bottom freezer, while on the other side of the room was a free-standing gas range with burners large enough for a big paella pan. One can only imagine what other marvelous dishes a chef like Gonzalez can prepare with such appliances.