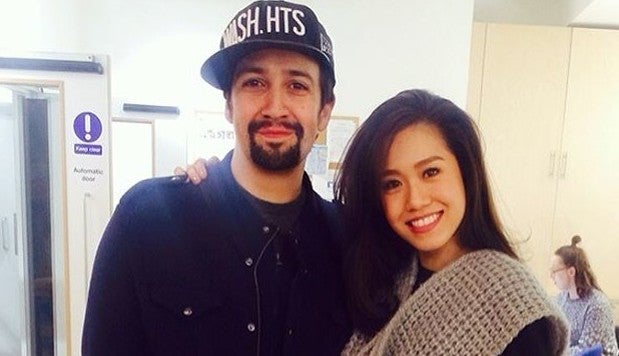 How Rachelle Ann Go bagged the role of Eliza Hamilton

Who lives, who dies, who tells your story?

Rachelle Ann Go is about to tell Eliza Hamilton’s story.

The Filipino singer-actor has been cast in the role of Eliza, wife of United States founding father Alexander Hamilton, in the soon-to-open West End production of “Hamilton: An American Musical.”

Go, who’s playing Gigi in the Broadway production of “Miss Saigon” until August, is, this early, studying the “Hamilton” book and lyrics every day after rehearsals. She is also planning to read “Alexander Hamilton,” the biography by Ron Chernow that the musical was based on, and watch YouTube videos about American history for perspective and context.

“I’m doing my best to find as much information about [Eliza]. I am also planning to visit the orphanage [Eliza established] here in New York,” Go told Inquirer Lifestyle via e-mail.

There is not much material about Eliza Hamilton, after all. What we know, based on the Tony- and Pulitzer-Prize-winning musical, is that she “raised funds for the Washington monument, established the first private orphanage in New York City,” and made sure Alexander Hamilton’s story lives on.

“[The challenge is] telling her story, her truth,” Go said. “It’s history, you can’t really change and twist Eliza’s character. I need to stick to who she really was and how she influenced the life of a founding father.”

While the musical talked about legacy at length (“What is a legacy? It is planting seeds in a garden you will never see,” goes a line), it also stressed the importance of history and how one’s story will be told.

“Hamilton,” the Broadway smash hit written by Lin-Manuel Miranda, is the story of the greatest American immigrant—“a bastard, orphan, son of a whore” who journeyed to New York and became a war veteran, George Washington’s right-hand man and American founding father, and is immortalized on 10-dollar bills.

The musical, which took seven years in the making, is told in rap (“the language of revolution,” according to former US President Barack Obama) and hip-hop (“its backbeat”).

On Broadway, Miranda led the culturally diverse cast, which included Leslie Odom Jr., Renée Elise Goldsberry and Phillipa Soo. The production has become a cultural touchstone: The former US president said “Hamilton” is “the favorite in the Obama household”; Democratic Party presidential bet Hillary Clinton quoted the libretto during her campaign; US Vice President Mike Pence went to see the show; and Ivanka Trump tweeted a few months ago that the musical surpassed her “very high expectations.”

The rave reviews are only challenging Go to push herself to become a better actor and singer. In July last year, she auditioned for two parts in “Hamilton,” though she was gunning particularly for Eliza.

On Dec. 12, 2016, she wrote on her notebook her goal to play the role in the West End production. Four days later, she got the e-mail saying she had bagged the part.

It was only in January this year that she saw “Hamilton” on Broadway for the first time.

“The whole thing just blew me away. From beginning to end, I [watched] like a mad fan screaming and jumping. The storytelling is just on point! Lin-Manuel Miranda is a genius!” she said.