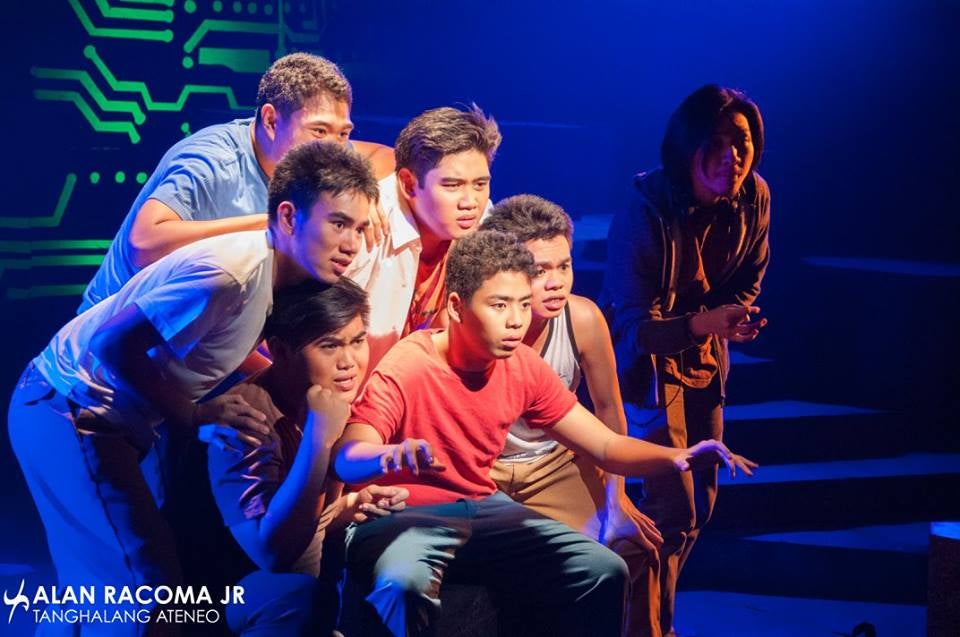 To encourage millennials to watch and engage with theater seems to be the rallying cry of many theater companies today.

Tanghalang Ateneo (TA)’s “Janus Silang at ang Tiyanak ng Tabon” is an original Filipino production that faces that challenge head-on. And judging from the way the college crowd laughed, jeered, cringed and sighed at all the right moments in it, the play is a success.

First of all, the production zips by in 90 minutes without intermission. Director Charles Yee makes use of this compact running time by adroitly balancing drama, comedy and horror/science-fiction, with barely a transition lull or unnecessary plot development to drag the play down.

Second, the audience can easily relate to the setting: teens and their late-night gaming addiction, parents who keep bawling them out for it, and smarmy schoolteachers, earnest barangay captains and sweet but flirtatious girlfriends.

Third, the story that hurls our hapless hero into new and frightening magical horizons, triggering his reluctant coming of age, evokes geeky pop-culture touchstones such as Harry Potter, “Star Wars,” “Underworld,” “The Matrix” and “The Lord of the Rings.”

But what drives the conflict into truly familiar territory is the infusion of Filipino mythology. As designed by Mitoy Sta. Ana, the tiyanak and other primordial creatures of our childhood imaginations creep and slither on stage, made more terrifying because the carefully crafted patches of darkness just hint at them, never allowing for a total reveal.

The creature is now let loose all over the country, thanks to a popular Pinoy-designed video game that kills gamers as soon as they reach the last level. Janus Silang, the survivor of the latest massacre, finds himself in the midst of an invisible war between the tiyanak and a ragtag human army. To his horror, the stakes are much higher this time than a video game, with his own family in mortal danger.

This play is an adaptation of the first installment of a five-book series written by Palanca awardee Edgar Calabia Samar; the very first book won the 2015 National Book Award for Novel in Filipino and the 2016 National Children’s Book Award for Best Read for Kids.

Gwynn Guanzon’s set design, meanwhile, blends the colored metallic backdrops of video games with the bleak, rocky caverns that birthed the creatures. Yet scenes can transform in an instant into malls or classrooms, done with a flick in lights and the rapid movement of an energetic ensemble that can take the shape of crowds, monsters, even flood-fleeing refugees.

The ensemble works hard to augment the efforts of the main cast, who do need to put more emotional shading into their characters. Earvin Estioco’s Janus is appropriately confused and lost, but he has a hard time maturing into the hero the story requires him to be.

Allan Forte’s Obi-Wan-like mentor could use a bit more gravitas, the lack of which only makes his more confrontational disciple (Jacob Whittaker) appear over the top.

Bong Cabrera’s Juan wings it as the stereotypical father, but lacks the nuances that could have prepared the audience for the big reveal at the end. Only Diega Villanueva gets it right as Janus’ protective, wise but unsentimental mother.

Fortunately, Luarca’s adaptation gives the audience everything it needs to empathize with these characters. It draws a fine line between the fantastical and real worlds, while leaving areas for interesting intersections.

This is an adventure story first and foremost, with a Filipino teenager awakening to a higher reality as its hero. One may argue about its social value, but it would be hard-pressed to deny that this production had its sought-after millennial audience highly engaged while they were watching.   —CONTRIBUTED