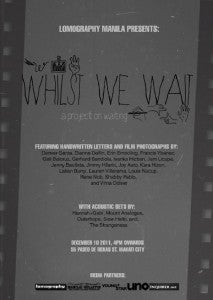 MANILA, Philippines – Whilst We Wait , inspired by Jeff Nachtigall’s The Art of Waiting, is a local analogue photography project which centers on the concept of waiting. It began last April of 2010 wherein each month for a year, its contributors took a film photograph or two. Nothing was developed until after a year. During the waiting period, the contributors expressed what they hoped to have captured on film through handwritten letters.

In cooperation with Lomography’s headquarter in Manila, Whilst We Wait will be having its much-awaited public exhibition on December 10 at 55 Paseo de Roxas, Makati, from 4 p.m. onwards. Lomographers in the metro and analogue photography enthusiasts are most especially invited to join the event.

There will be acoustic sets by local indie bands and a mini bazaar. For more details, you may visit www.facebook.com/WhilstWeWait or contact [email protected] . (advt)