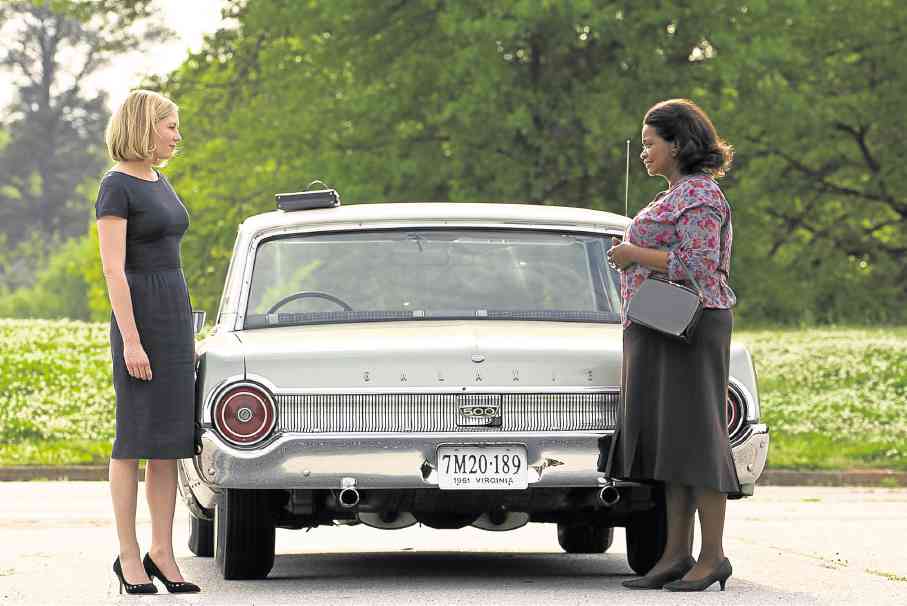 Kirsten Dunst and OIctavia Spencer in a scene from “Hidden Figures”

Acting since childhood, the talented and versatile Kirsten Dunst shot to fame in the 1994 hit, “Interview with the Vampire,” which led to numerous awards and a Golden Globe nomination.

The consummately talented two-time Golden Globe nominated actress Kirsten Dunst joins the cast of the new film “Hidden Figures” as Vivian Mitchell, a (fictional) supervisor at NASA. Directed by Ted Melfi, the powerful film is set against a backdrop of the Cold War and inspired by true events.

The movie is based on the lives of women who are included in Margot Lee Shetterly’s book, “Hidden Figures: The Story of the African-American Women Who Helped Win the Space Race.” Golden Globe and Emmy winner Taraji P. Henson stars as Katherine Johnson, who worked at NASA together with her friends, Dorothy Vaughan, played by Oscar winning actress Octavia Spencer, and Mary Jackson (Grammy nominated Janelle Monae).

What was the appeal of “Hidden Figures” for you?

I was excited to be part of this wonderful story. Not only do I think “Hidden Figures” is an inspiring film, but it is also a story and a part of history that people don’t know about. I explained the story to my family members and no one even knew about Katherine Johnson or any of these women. The film will be so inspiring for girls to watch. I don’t think many young women think that being a mathematician is something that they can strive for, or that is a “cool” career. It is a very important story for everyone. There haven’t been many big films lately that are both historically significant and beautifully told like this one.

It seems like your role in this film is quite different from anything you’ve done recently?

Well I haven’t done a big studio film for a while and I thought to myself, ‘Wow, this is going to be a movie that a lot of people will actually see and they will take away something important away from it. I thought, if I am going to do a studio film, this is such a great one with amazing women and a great director. All the producers behind the film are passionate about the story, too. It is not just another special effects movie where you are just strung up on a wire. Not that I didn’t love doing the “Spider-Man” movies, but this film is more fulfilling than most. Also, the music is going to be great because Pharrell (Williams) is doing the soundtrack for the film, and he is creating ’60s music.”

Your character, Vivian, is the fictional supervisor of all the female computers.” What challenges does she face and what kind of woman is she?

She gets a lot of pressure from the men. There was so much discrimination at that time for all women. I think it is frustrating for Vivian not only as a woman, but also because she consistently has to be the bearer of bad news from her superiors to her black colleagues. And having to do that gives her a lot of anxiety and stress.

She is not naturally prejudiced?

I never wanted to play her like that because I think it would be very clichéd. The way I saw it, these are the rules that she has to abide by at work. Vivian’s frustration comes out of the fact that she can’t change the rules herself. She is under someone else’s thumb, her boss, and that upsets her and makes her a little tightly wound. In the beginning, Vivian, like everyone else, has been programmed by society to be prejudiced, because that is just the way it is. But segregation bothers Vivian. I don’t think she is comfortable with it or that she is a racist. She knows that this is the society she is living in. I think that is part of Vivian’s struggle. Also she has a struggle because she is a divorced woman, which was almost unheard of back in those days.

How does your character contribute to the story by helping to break down racial barriers?

At the start she is the one who gives Katherine a chance to be up there with the men, doing her job and being part of the team. Katherine is the one calculating the trajectories to get John Glenn into space. Then Vivian becomes friendly with Octavia’s character, Dorothy. That is Vivian’s biggest relationship in the film and ultimately she really wants to see Dorothy succeed.

This is such a strong film led by talented women, depicting a time when it was so difficult for black people, women in particular, but also all women. How much progress has been made in terms of diversity and equality in Hollywood?

You know, I feel that in terms of film and television it is very diverse now. There is always opportunity for more diversity and progress though and that’s why this is a very important story to tell right now. Fortunately, over my own career I have been able to work with many women and I haven’t felt that the opportunities weren’t there for me. I have worked with many female directors. I have always created that for myself, most have been first-time directors as well. I think that a lot of it is up to you as an actor to make those choices.

The one thing I will say is that on the subject of equality, we should all be paid equally: men and women. It is ridiculous to me that that we wouldn’t be and that one of the biggest issues in this industry is equal pay. And of course equal pay is so important in every industry.

Is it important to you to play strong women?

I like seeing all women portrayed in film and in television. I like flawed women, I like movies with men in them but I am not as interested in a film if there are no good female characters. So no matter how good the film is, I always enjoy seeing a great female story.