Selfies at the Art Fair: How art has become sexy, and for everyone | Inquirer Lifestyle 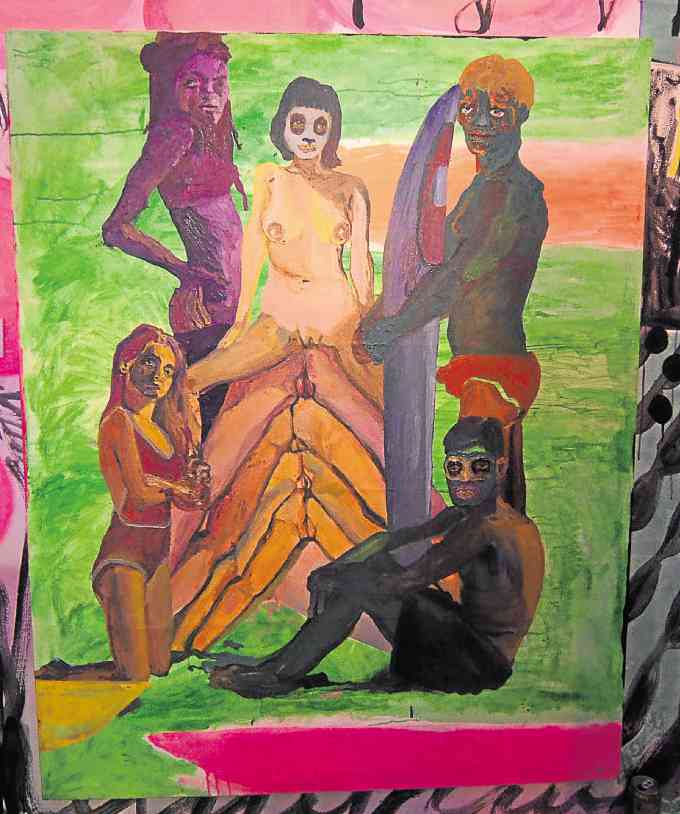 Selfies at the Art Fair: How art has become sexy, and for everyone

There’s a lot to get your juices flowing at Art Fair Philippines 2017, which ends today, Sunday.

And the art isn’t bad, either.

It’s only Day 1 of the four-day annual event, and judging from the lines at the door and the throngs of people crowding two floors of exhibits by 46 galleries, all roads in the metro lead to The Link Carpark at Ayala Center, where the fair is taking place.

About five years ago, Simon Napier-Bell wrote in Huffington Post that “for young people with something to express, art is the new rock and roll.”

The Art Fair is a case in point.

For the past few years, the Philippine contemporary art scene has been generating the kind of energy and excitement that used to be the exclusive province of alternative music. Today it has its own rock stars, its grizzled veterans, its unsung geniuses, its punk upstarts, its own subculture and a diverse and growing audience.

Most of the time, the art scene is diffuse, scattered among different galleries and cliques, connected only through social networks.

But once a year they converge in real life. For the local art scene, the Art Fair is like Toycon and Malasimbo rolled into one, a ritual gathering of the tribes.

Apart from the usual suspects—the well-heeled collectors, the chin-stroking professional appreciators, the aging bohemians and the ubiquitous hipsters—there are young couples, high school students, office workers on lunch break, silver-haired senior citizens and kids who look like they came here on their skateboards.

It’s a far cry from past decades when art was a rarefied experience enjoyed by a privileged few in the exalted cathedrals of culture.

Today art is everywhere, in the frenetic local gallery scene, in the malls, on Facebook pages and Instagram posts.

Far from being a rarefied experience, it has become a part of daily life, at least among plugged-in, urban-dwelling Filipinos.

For diverse reasons, not least of which is its growing young demographic, contemporary Filipino art has become democratized and—for lack of a better word—sexy.

This year’s Art Fair is the sexiest one yet, and somehow, it feels more crucial than in previous years.

Perhaps it’s true that repression breeds expression, and that art provides a necessary humanizing counterbalance to an oppressive prevailing social and political order, a light against encroaching darkness, a shield against the ugliness of the world.

Perhaps nothing jumpstarts an artist’s creativity like death squads roaming the night, dropping bodies in the street.

In any case, sensory overload is a given at any art event of this magnitude, but even a cursory skim through the exhibits reveals two things:

One, everyone has leveled up his game. Almost without exception, the artworks on exhibit are stronger and better presented, the artists more willing to push the envelope in terms of content, execution and experimentalism.

Two, even with the diversity in styles, media and subject matter, two themes seem to dominate the works on exhibit this year: sex and politics.

There is plenty of frank eroticism to go around, of both the cosmic and the earthbound variety: from Agnes Arellano’s Tantric goddesses and fertility figures, to Orley Ypon’s naked exotics, to Japanese cult figure Nobuyoshi Araki’s photographs of bondage and other kinks.

“This is the new punk, and punk is pink,” says José Tence Ruiz as he pulls me toward Maria Jeona Zoleta’s riotous installation in which painting, film, photography and sound collide in an orgasmic release of sparks and color and frontal nudity.

Tence Ruiz’s own installation swings the other way, toward the more political end of the spectrum: the “Langue Lounge,” a suite of electric chairs around a giant totemic head that looks suspiciously like President Duterte’s.

There are plenty more political statements if one cares to look, from Kawayan de Guia’s construction that also plays on the president’s visage to Kiri Dalena’s suite of First Quarter Storm-era photographs, with the placards blanked out as if asking the viewer to fill them in themselves.

Local art aficionados might act locally, but they think globally.

In the Kogure x YOD booth, overseen by a couple of hipsters rocking sukajan jackets, I meet Taichi Kondo, a young Japanese painter.

“Compared to the market in Japan, the Philippine market is more energetic,” he says. “In Japan it’s more quiet.”

Many young Japanese artists are struggling because of the economic downturn, he continues, which is why he opted to expand his horizons. After noticing that his Facebook posts were getting a lot of hits from the Philippines, he joined a group exhibit at Finale Art File last year, and now here he was.

“I feel this is the best way to explore my art,” he says.

With the internet, contemporary art is increasingly global in reach, and art fairs provide a platform for bridging distances between artists and audiences from different parts of the world, or indeed different eras.

Madrid-based Galeria Cayan, for instance, was back this year with another collection of early Fernando Zobels. León Gallery presented a José Joya retrospective showing the evolution of the National Artist’s style from the 1950s to the 1970s.

At the Joya exhibit I find historian Ambeth Ocampo, who has curated two current exhibits of works by National Artist Arturo Luz, one at the Ayala Museum and another at the Ateneo Art Gallery.

He observes that many of the people attending the Art Fair seem more concerned with taking selfies with the artwork and, if possible, the artist than looking at the paintings. This only seems to emphasize how the way we appreciate, experience and consume art has changed.

Many of the exhibits invite audience immersion and interaction, from Tence Ruiz’s installation where viewers are encouraged to strap themselves into the chairs and have their pictures taken, to the sound art installation by WSK where viewers can join in the cacophony, to Dex Fernandez’s Garanimation Project, in which he provides viewers with a template they can draw on, to be incorporated into the final work.

Having reached saturation point, I make my way to the exit.

On the way out, I run into BenCab and Annie Sarthou, who’s wearing a T-shirt that says “Stand up for human rights.”

I hadn’t noticed any BenCabs on exhibit, and as it turned out, it was because they were where I least expected them to be: the Secret Fresh booth.

Starting out as a venue for limited-edition custom toys and collectibles, Secret Fresh has evolved into a full-service gallery, while still holding on to its pop-art identity.

For the art fair, BenCab collaborated with Secret Fresh on a set of limited edition figurines, including a dancing Sabel series, and a frieze of “evil clown” faces—a little more playful than the usual BenCab works one encounters in the auction houses.

“That’s why I like the Secret Fresh group,” says Bencab. “They’re young and open to new things.”

After gamely posing for selfies with mobs of admirers, he offers his take on the whole art fair experience.

“It’s exciting, and it’s fun,” he says. “It’s a challenge to be noticed because there are a lot of galleries, so artists try their best to outdo each other.”

Of course, at the end of the day, an art fair is still basically a trade fair, and from all indications, business was brisk. At least two of the gallery owners I talked to said they were completely sold out, and this was just Day 1.

“You can’t not be here,” one of them said. “Otherwise you’ll be left behind.”

Before parting ways, BenCab poses for a photograph with pink-haired pixie Yeo Kaa, whose works are among the featured exhibits in the Secret Fresh booth.

At least 50 years separate the National Artist from the emerging young painter, yet here they both are, on a level playing field, with the same opportunities to have their work enjoyed and appreciated.