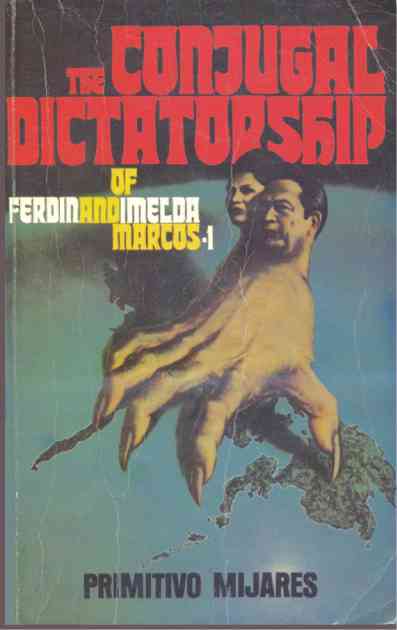 Primitivo Mijares, the chief propagandist of the dictator Ferdinand Marcos before defecting in 1975, was nowhere to be seen in the launching of the reprint of his groundbreaking work “The Conjugal Dictatorship of Ferdinand and Imelda Marcos.”

The host during Tuesday’s book launching called out to Primitivo, fondly called Tibo, from the audience.

“Hindi ba nag-confirm? (Didn’t he confirm?) Tibo, are you there?” Joey Gurango, Mijares’ son-in-law, called out to the audience in the auditorium at the Bantayog ng mga Bayani in Quezon city.

Mijares was nowhere to be found in the launching of his own book 40 years later, because it was only a year after the 1976 publication of his book that he disappeared without a trace. He was declared legally dead later.

Mijares, a long time reporter who finished law, served as the chief propagandist of the dictator Marcos before he defected in 1975. He testified before the US Congress about the atrocities of the Marcos regime, and later wrote the controversial book that led not only to his disappearance, but also to the death of his son.

Sixteen-year-old Luis Manuel “Boyet” Mijares would be found murdered and mutilated in 1977, just a year after the publication of the book.

The grisly history behind the book did not stop Mijares’ surviving kin, his grandson Joseph Christopher “JC” Mijares Gurango, to lead the second reprint of his grandfather’s book that provided an insider’s account on Marcos’ machinations that paved the way for the dictator to cement his rule through martial law.

In fact, the reprint of the book happened at a time the surviving Marcos kin are bent on returning to Malacañang, with the near vice presidential win of Marcos’ son and namesake Ferdinand “Bongbong” Marcos Jr., JC told the Inquirer at the sidelines of the book launch.

“The reason we’re doing this is because we know there’s a lot of whitewashing going on in that particular era in Philippine history. We want to make sure that part of history is told accurately,” JC said.

“It’s sort of triggered by Ferdinand Marcos Jr. running for vice president and almost winning. It shows the Marcos family has intentions to come back, and they’re kind of close,” he added.

JC said the reprint of the book was not intended to avenge their deaths, but because his family wanted to educate the youth on the correct history on the martial law regime of the dictator Marcos.

“To me, my uncle and grandfather are just two people in a very long list of names that disappeared and were tortured,” JC said.

She said what stayed in his mind reading the book was about student activist Liliosa Hilao, a campus journalist who was abducted, tortured and killed. She was the first reported case of a detainee killed during martial law.

JC said most disconcerting was the fact that Marcos’ son and namesake almost won the vice presidency, just one seat away from the president’s seat in Malacanang.

Bongbong is also a close ally of President Duterte.

READ: Duterte: Bongbong Marcos could be our new VP

“It’s pretty upsetting that the Marcos family is trying to have a resurgence, and they have the audacity to get back in the first place,” JC said.

“What’s even more upsetting is that they got close,” he added.

After the fall of the dictatorship, the Marcoses never left public office. The dictator’s wife Imelda is an Ilocos Norte congresswoman, while the daughter Imee is a governor in that Marcos bailiwick. Bongbong was senator when he ran but lost in the 2016 vice presidential race.

JC said he hopes the book would impart information on the youth amid a deluge of trolls and fake news on social media, where the image of Marcos is sanitized.

“The only way that we can make sure the history of our country is told right is if this part is told, and the only way that happens is through education… This is an insider account that’s unlike any other,” JC said.

Among the personalities who attended the book launch are the key members of the opposition during the Marcos regime – former Commission on Human Rights chief Etta Rosales and former senator Rene Saguisag.

Maria Serena Diokno, who resigned as chair of the National Historical Commission of the Philippines when the dictator’s remains were sneaked in for a hero’s burial at the Libingan ng mga Bayani, is the daughter of another key opposition during the Marcos regime, then senator Jose Diokno.

Saguisag called on the youth to get a copy of the book which changed the country’s history.

“We need books like this para mabasa kung ano talaga ang karanasan ng sambayanan from 1972 to 1986 (so that everyone would read what was the experience like from 1972 to 1986),” Saguisag said.

He said Tibo Mijares deserved to be memorialized in the Bantayog ng mga Bayani.

“If anyone belongs here, it should be Tibo. He played a critical role in awakening the sleeping nation,” Saguisag said.

Saguisag called out President Rodrigo Duterte and said his thanks that the president made books about Marcos relevant again.

Duterte had been praising Marcos’ feats to emulate in his speeches, and even entertained the idea of reimposing martial law to fuel his bloody narcotics war.

For her part, Diokno lamented the Supreme Court decision allowing Marcos’ hero’s burial, calling out the justices for forgetting history and wanting to move on from the dictator’s atrocities.

She also slammed Malacañang spokespersons for defending Marcos’ burial and for saying that the nation should not get stuck in the past.

READ: Palace hopes Marcos burial issue will be laid to rest | SC: ‘No grave abuse of discretion’ by Duterte on Marcos burial

“If you want to move on, harapin mo yung nangyari (face what happened). Hindi yung tatalikuran mo (Don’t turn your back on it). You cannot diminish it, you can’t ignore it, and most of all, you can’t silence it,” Diokno said.

Diokno urged the youth to read the book and be enlightened about martial law, and for the country as a whole to think about what’s important for nation-building.

A hushed silence enveloped the room as the audience saw there printed on the page Rodriguez’s maiden name Ma. Cristina Verzola, 20 years old, under the catalogue of prisoners who were tortured. She suffered beating, cigarette burns, and sexual abuse.

“My name would be reported as a survivor of torture,” she said.

In fact, in page 493, her name was again mentioned. “One girl from Baguio, Ma. Cristina Rodriguez, was forced to strip by the interrogators and her genitals touched,” Mijares wrote.

“I never knew he had those records with him. I ignored that book until three years ago, when I decided why don’t I actually read the book of Mr. Mijares,” Rodriguez said.

Rodriguez and Saguisag were one in saying that the book is a must-read especially for the youth today.

“We have to pass on the torch to the younger ones,” Saguisag said. CBB