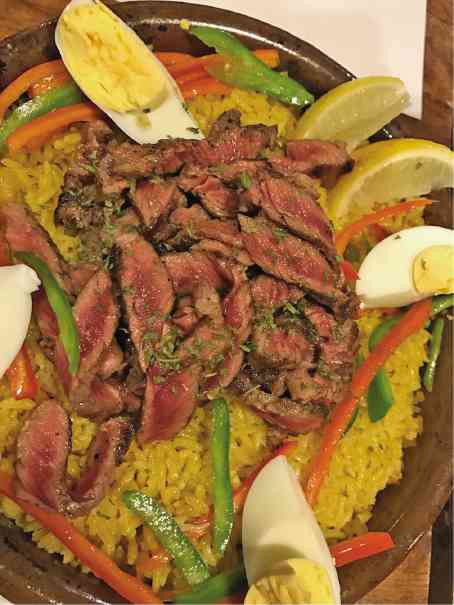 It all started out very innocuously. The first time we ate there we were quite happy with it, but I decided that there wasn’t enough to say about the place to warrant a review, so I didn’t write about it.

Four visits later, my wife and I have found that this restaurant has insidiously inserted itself into our lives to become our go-to dining places when we’re in the area.

We have been visiting Greenhills more and more these days. If Makati is all about towers of power, and Bonifacio Global City is its sleek upstart neighbor, there’s something comforting about the way Greenhills is lumpy and garish and, like Binondo before it (where a lot of its inhabitants started out from), it’s unapologetically about making money in a busy, quiet, unglamorous way.

I like that Unimart is still where it used to be, with the same old rusty carts from my childhood (but sadly no more Orange Julius); that Shoppesville and Virra Mall were not subjected to the wrecking ball the way that Makati’s Rizal Theater and Park Square were razed to the ground, but just interlinked with a labyrinth of connecting bridgeways.

I could do without the sidewalks full of trash and dead rats, the SUVs full of grandmothers wielding senior citizen discount cards, and the pickpockets who roam the tiangge, which with its veiled women and goods traded from everywhere is more like the Grand Bazaar in its heyday than the actual Grand Bazaar is today.

There is an enticing row of restaurants in the area where the old Tom Sawyer used to be, now another mall with its own theaters and shops.

Eric Kayser briefly tried to make money in the same place, but the aunties of Greenhills said no, and Refinery is there now.

But for good coffee, the place to go is Toby’s Estate, awkwardly located a few doors down. This particular branch has the odd combination of having no in-house WiFi, terrible cell-phone signal, and good acoustics, so that upon entering you are met with that increasingly rare sound in a coffee shop, the buzz of actual conversation.

As for the coffee, I am of the opinion—and I know I’m going to get roundly spanked for this by all my aficionado friends— that the flat white, when made properly, is about as good as coffee gets in the metropolis these days.

After recovering from the heat and the humidity and the humanity over a cup for a little while, we inevitably find ourselves heading to Hai Chix, just across the street. I don’t quite understand the concept behind Hai Chix: I suppose it stands for Hainanese chicken, which is on the menu, as is laksa.

But lest you think that it’s a Southeast Asian or Singaporean restaurant, the menu makes a sharp left and offers paella and shrimp in garlic.

There’s also pasta with Manila clams, which is at least still vaguely Mediterranean, so we are in the same continent. (Manila clams are, perhaps fortunately for us, not clams from Manila Bay, but are a species, venerupis philippinarum, that grow along the western Pacific coast.)

But like most everyone else in the establishment, we are there for the steaks. The best cut is the US Angus Ribeye, which is billed, accurately, as being adequate for two to three persons sharing: two ravenous persons, or three eating modestly.

Hai Chix does its steaks properly rare, so with Peter Luger’s, it’s actually best to go for medium-rare rather than rare, which is almost bleu. With medium-rare you get a bit of char on the outside and the flavor comes out more.

The meat is very well seasoned; purists would probably say over-seasoned, but I would just call it Filipino. There’s no range of different-textured salts, complex sauces, or assortment of condiments. But here’s the conundrum: It’s really good steak, and at a really good price.

The last time we went as a group, we ordered the porterhouse—which is less exciting for me because there’s all that lean meat on the tenderloin side (the porterhouse, to be simplistic, has a sirloin down one side and a tenderloin down the other)—and had a whole bunch of side dishes.

We were also given a free bottle of wine that wasn’t terrible, and paid about P1,000 each.

This isn’t a fine dining steak joint, of course. There’s no parking and you have to walk up— which is actually true of Elbert’s Steak Room, actually, but the similarity ends there.

This place is all bare walls and a cement floor; you can’t hear each other and your clothes will smell of grilled meat. It is not afraid of fat—the steak comes bathed in a clear puddle of the stuff, and just in case you don’t have enough, the chunks are rendered until they’re brown and crisp and pile the crunchy bits on top of the steak.

To go with the meat, you are given bowls of steak rice, which is white rice that has been slathered with the steak grease and studded with more bits of rendered fat.

There was not a single vegetable in sight. Lovely stuff; and, really, at these prices you can’t complain.

I understand that this restaurant has other branches, but the no-nonsense vibe couples with the incredible value for money seemed perfectly in keeping with the Greenhills vibe.

There’s an ice-cream parlor downstairs called Carousel Creamery that has every single flavor of ice cream that has been invented, as well as some that probably shouldn’t have.

Beyond the sheer variety, it’s not a bad scoop at all, even if a little on the sweet side. There’s a beer and chicharon flavor, in case you want to have a circular meal and eat pulutan as dessert.